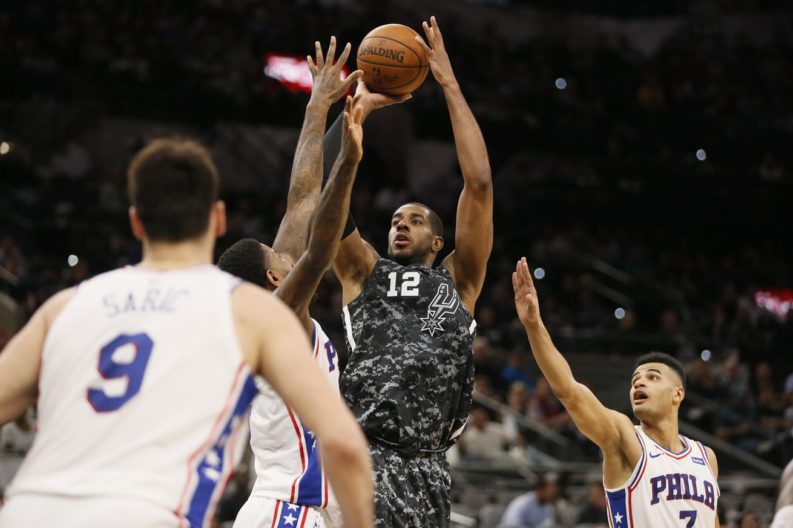 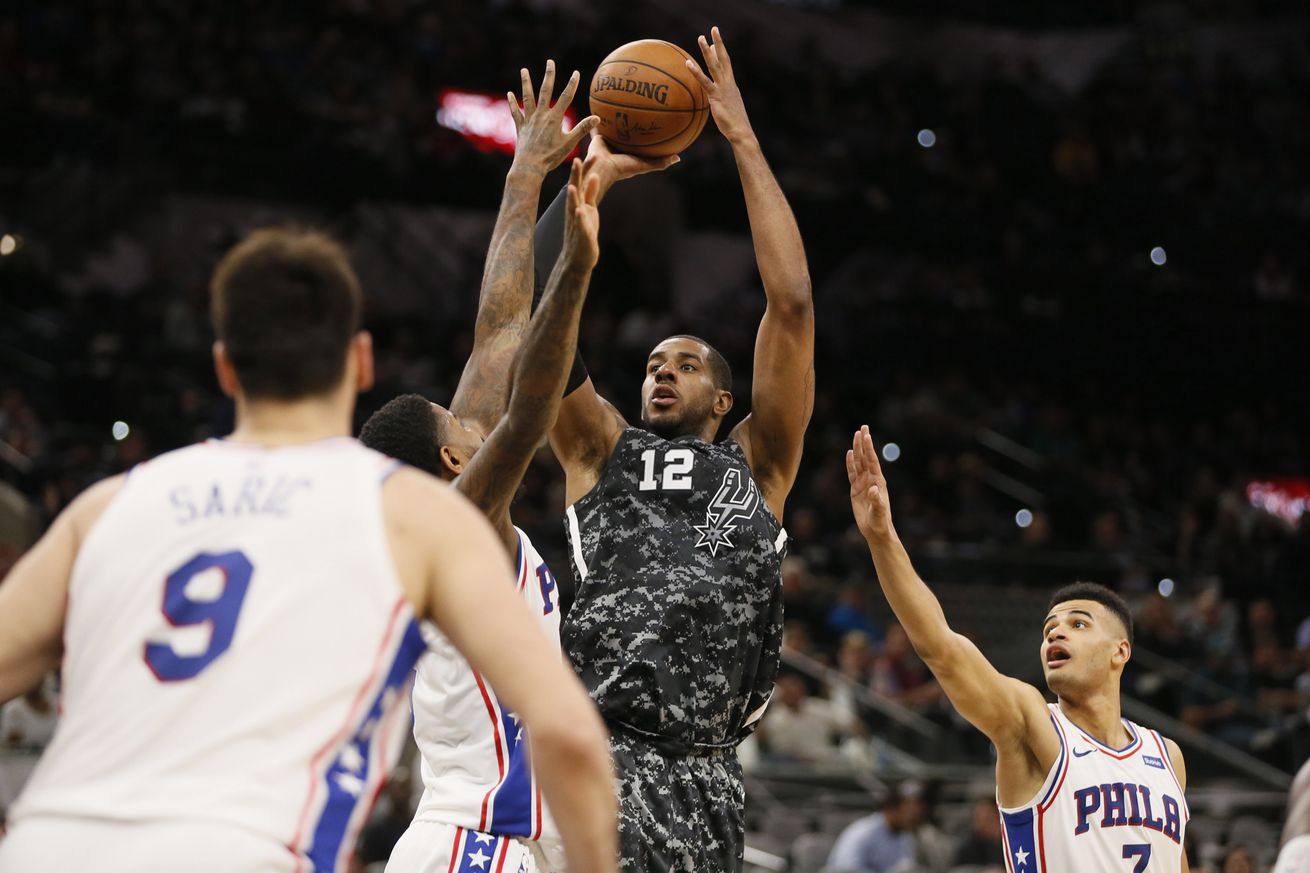 San Antonio could only muster 78 points against a young Philly team that was locked in on both ends of the floor all game long.

After watching his team struggle to buy a basket against the 76ers on Friday, Gregg Popovich offered some financial advice for fans that had just witnessed the 97-78 loss: get a refund.

“If I was a San Antonio fan tonight, I’d ask for my money back,” he said in a brief post-game statement, in which he also criticized his own team’s defense and lauded the Sixers’ preparation and effort on both ends, and after which no questions were taken.

The team’s official ticket guidelines clearly lay out the terms of their refund policy, and those presumably take into account post-game commentary by the head coach. But there should be some outstanding exceptions — such as when the visiting team possesses the power of precognition.

When the Spurs were setting an off-ball screen to attempt to spring LaMarcus Aldridge free down low, the Sixers were ready with a switch. When a San Antonio defender was making a rotation towards rookie phenom Ben Simmons, he was already throwing a laser skip pass to the open shooter. Almost every three-point attempt (the Spurs only made 3 of their 24) was accompanied by a hand in the face.

One of the first things Pop will remind reporters is that he doesn’t gameplan for his opponents. Ask him what he thinks about a particular player or style of play they use and he’ll say something to the tune of “When we’re perfect, I’ll worry about the other team.” This is, of course, not entirely representative of the level of preparation that the coaching staff as a whole brings to a game, but it speaks to the bigger picture that he remains focused on.

Sixers coach Brett Brown doesn’t have the luxury of stating such a stance, nor does he need to assume one, given the 12 years he spent as an assistant under Pop. Brown maintains a familial relationship with the organization — he mentioned having dinner with Pop on Thursday night and going for a walk with R.C. Buford before the game — and he appeared to have done his homework on his old squad heading into Friday’s matchup.

Having an All-Star center on the floor helped, too. Joel Embiid only made 6 of his 15 shots on the night, but his physicality helped the Sixers set the tone in the paint and on the boards, where the Spurs had one of their worst disparities of the season, getting outrebounded 50 to 36.

Embiid is a mountain with legs, and I understand the very human impulse that every Spur below shows in choosing not to get turned away by him, a circumstance further exacerbated by Embiid’s teammates also rotating and contesting in ways that dissuade audacious behavior.

Not the best ATO play the Spurs have ever run. pic.twitter.com/5WyDyPrizy

But what makes the above play so relatable, the wooden execution and casual delaying of the inevitable, is also what makes the loss so understandable. The Spurs collectively lacked a mental edge on Friday, the kind of psychological drive that propels NBA players to do the incomprehensible, and Pop knows that all the advanced scouting and scheming in the world can’t mitigate that.

Thanks to drawn-out sequences like the above, Friday’s game was played at a Spurs-friendly, snail-like pace — 86 possessions. The problem is, the wrong team ended up flourishing in the half-court, with the Sixers’ 97 points coming at a sneaky-great 114.2 offensive rating. while the Spurs found themselves taking a number of low-percentage shots in late-clock situations.

Much of that advantage can be attributed to their rookie point guard, who was simply spectacular (21 points on 10-of-11 shooting; 7 assists, 5 rebounds). Simmons got to wherever he wanted on the floor, consistently setting up his teammates in the process, whether he was forced baseline or driving through the meat of the defense. While their physical profiles couldn’t be any different, there’s a Manuesque quality to his game that stood out on Friday. Between his playmaking and his unfettered aptitude for driving left (he seemed to play almost exclusively on the right side of the floor so that he could attack across to his strong side), there were shades of the Argentine’s best traits on the floor, even with the 40-year-old sitting out another game with a thigh injury.

The good news for the Silver and Black is that they remain in San Antonio for four more games, and can shake off Friday’s loss against a 15-33 Kings team that is not so far along on their own Process arc. It’ll hopefully mean money well spent for Spurs fans looking for a bounce-back win.

The Sixers had lost 13 straight games in San Antonio before winning on Friday.

The Spurs not only had a new season low for total points scored in a game (78) — they also set new lows in points in a half, at 31. The previous low was 34 against Orlando.

More flashes of promise from Murray

The statistical profile of Murray’s third straight start was once again strong: 10 points, 9 rebounds, 5 assists, a steal and a block. The young guard found Pau Gasol twice early in the game penetrating to his right, setting the center up for easy baskets at the rim. He doesn’t yet read the floor like you want your point guard to, and his forays into the lane remain a crap shoot, but these are the ebbs and flows Spurs fans must prepare for with Pop handing the keys over to a 21-year-old.

Cosigning on both of these:

The Spurs look terrible. They need to get at least Manu back soon. There’s no dribble penetration.

#Spurs are 3-3 (3-4 if you count the Atlanta game when he got hurt in the 1Q) while Ginobili has been sidelined with a bruised thigh. They miss their heart and soul, or a Danny Green calls him, “the glue for us.”

“It’s the most natural appointment to have Gregg Popovich coach the United States Olympic Team… I think to have him, given all he’s done in the game with his Air Force background, representing the United States is so natural.”

Brown added more, touching specifically on how Pop’s management style will fit in with leading a team of star players:

“I think that’s the thing that makes him so incredibly unique — he’s so different than people might judge from afar. There’s a human side to him and a relational side to him that’s just A-plus-plus. And people wanna play for him. And he’s always wlked that line of being tough and demanding and ‘You’re gonna play defense or you probably won’t be playing long,’ and ‘How is your child?’ and ‘How is your wife?’ and ‘How do you feel?’ He walks all that, but masterfully, and so when you see LeBron come in the building or KD come in the building. There’s a respect, because of his resume, but it grows to such a high level when you add in the human side.”

Pop, on how this passing of the point-guard torch compares to the last one

“It’s the same thing — everybody’s different in some ways — but learning how to run the show takes a little bit of time. The point-guard position is the toughest on the court. It has an infinite amount of responsibilities. You start at the beginning and roll. Each player has different strengths, both mentally and physically, that you work on. Most of it is situational; they need to be out there in all sorts of situations and learn how to react and what to do. So, we know at this point there’s a lot of season left and it’ll be a great opportunity to grow. I’m fortunate that Tony Parker has the character that he has to accept it the way that he has and be a leader and a mentor for Dejounte. So, it’s working out well.”