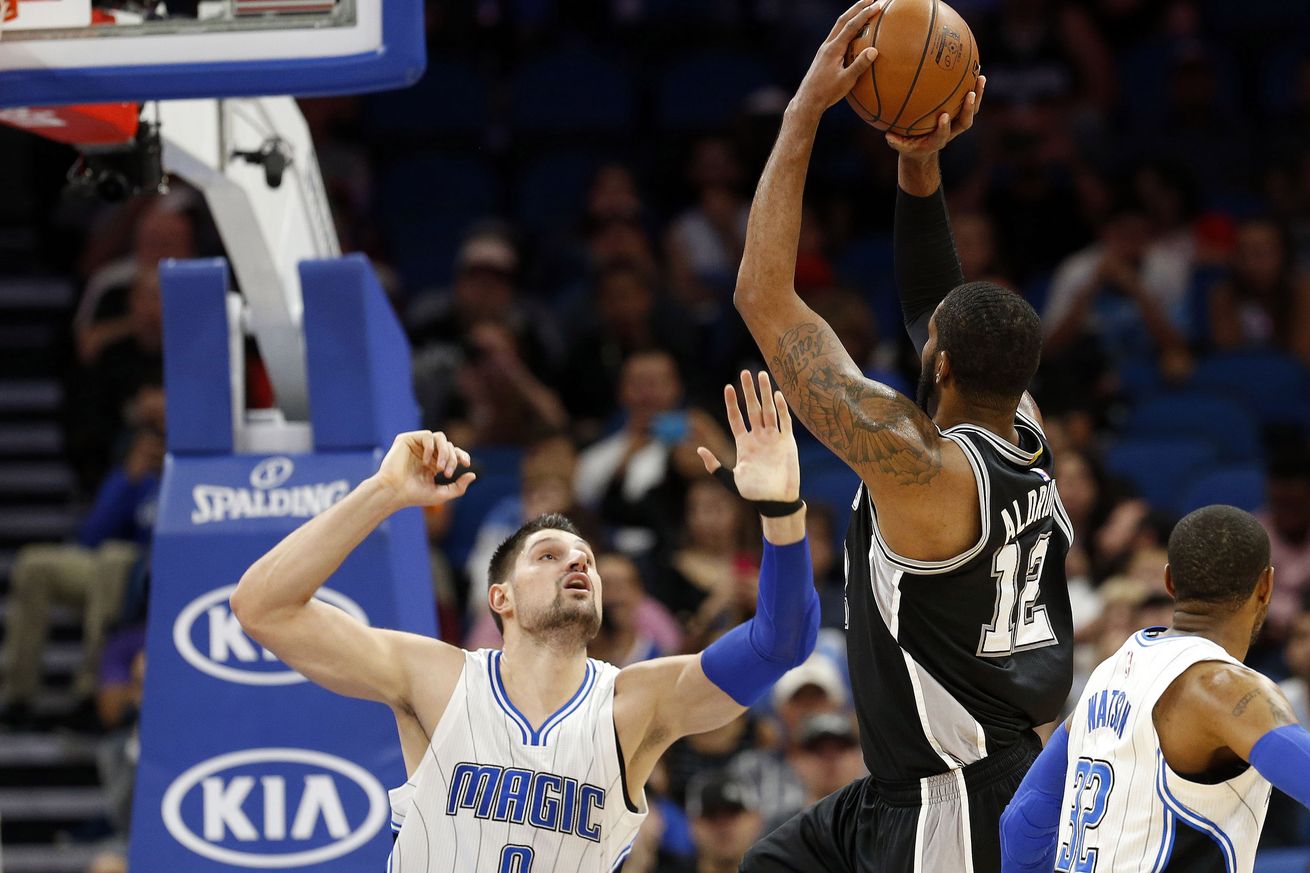 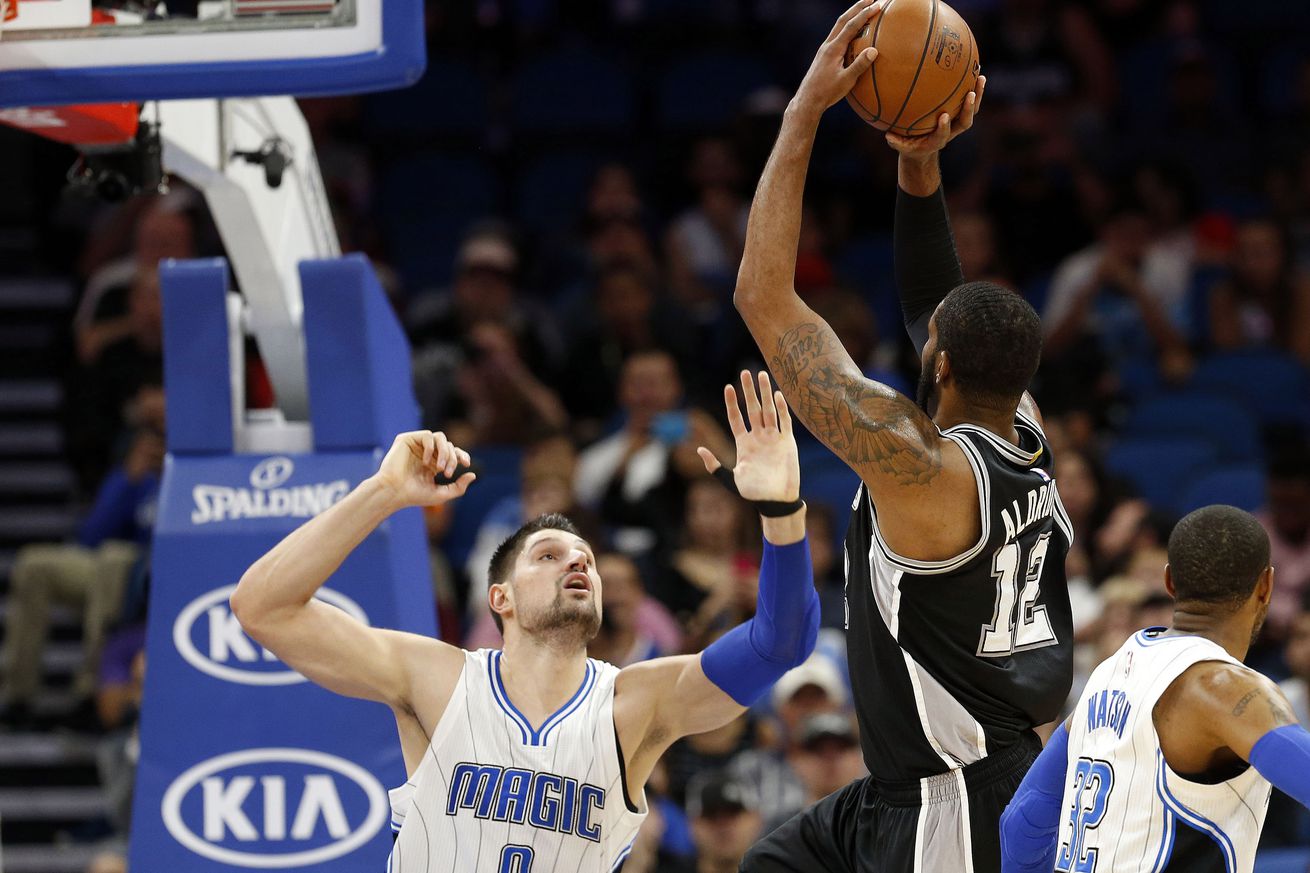 You often hear the term “scheduled loss” thrown around in the NBA whenever a contending team gets upset in the regular season, but I’d like to introduce you to the concept of a “scheduled win.”

Let’s look at all the things the Spurs had in their favor going into Wednesday night’s game at Orlando. It came on the eve of the All-Star break, where young teams typically lose focus a bit. If you don’t think that’s a real thing, then consider that the Spurs have won seven of their past eight on “All-Star Eve,” despite always being in the midst of the RRT, and the one loss was against a Chicago team that finished with the best record in the league.

Secondly, the Madge had already handed them a surprise loss at home earlier in the season, so you suspected that motivation wasn’t going to be an issue for the visitors.

Then Orlando just happened to trade Serge Ibaka —a notorious Spurs nemesis— a day before the game for a bag of Magic beans, a clear signal to the remaining players that the organization was cashing in their chips for the remainder of the season and green-lighting Tankapalooza 2017. One suspects more trades will be in the offing, but don’t expect Orlando to be involved much in the business of winning these next few months.

Also, it would be Dewayne Dedmon’s first game back against his former team, and it made sense to think he’d want to show out against the organization that prioritized giving Bismack Biyombo all of the money to be their backup five when they could’ve just given him some of the money to stay in that role.

Finally, a story came out the day before that LaMarcus Aldridge wasn’t happy about not being named an All-Star, pointing out that the Golden State Warriors had four guys and the Spurs just had Kawhi Leonard representing them, despite being just a handful of games behind in the standings.

Were you in the mood for a passive-aggressive quote? Well you’re in luck. Here’s Aldridge doing his best LeBron James imitation.

“It was very difficult to adjust from being who I was to who I am now. Now, I’m fine. I do what I’m asked to do. I rebound, take shots every now and then. I’m not really asked to be that guy that I was, so I just play the role that they want me to play. Play defense. Do pick-and-pop when they need it, and other than that just play off Kawhi.

“Every now and then.”

Anyway, you kind of figured Aldridge would have a good night after that came out, just to present his case to the fans one last time.

The game was never close, beginning to end. Aldridge, to his credit, started out on fire from outside, with six first quarter buckets, all on jumpers. The Magic weren’t overly concerned with defending anyone, as they repeatedly left Leonard wide open, and though they got away with it early on, it proved problematic as the game wore on. When Aldridge wasn’t scoring from the half-court, the sloppy Magic were turning it over nine times in the first quarter alone, which allowed the Spurs to attempt 12 more shots in the period and make eight more. It was 30-16 after the one, and pretty much all she wrote.

Leonard took over, scoring 11 points in an evenly-played second quarter, with not much going on for either side. Well, except for this.

Confirmed: Manu Ginobili has eyes in the back of his head pic.twitter.com/rTqyybe8uL

The third quarter was different. Both sides flexed their offensive muscles a bit, with the Spurs finally connecting from outside with five threes. It allowed them to stretch their lead out to over 20, even with an 11-0 Magic run sandwiched in the middle of the quarter. The story, unfortunately, was Ginobili stepping on somebody’s ankle —I think it was Aaron Gordon?— and having to leave the game. The injury report after said it was a “left ankle impingement,” which certainly sounds alarming. He had one of those in the 2008 playoffs if you’ll recall, and it not only limited him during that postseason but also led to two major injuries in the Olympics that summer and then the following season.

So here’s everything that you wanted to know about ankle impingements.

I know the All-Star break sounds like the ideal time for this setback to happen, but frankly it wouldn’t be the worst thing in the world if Ginobili was on the shelf for a week or two past that if it ensured he’d be 100 percent after that. We’ve seen him worn down in the playoffs the last two years and he’s been dragging the whole RRT. I think the best chance for him to be at his best for the playoffs is to take a break for a while and to just play the final month to get his rhythm back. At the same time, I fully understand that I’m being selfish here, in prioritizing a postseason run that’s unrealistic anyway over Ginobili enjoying the last few months of his career.

For what it’s worth, Ginobili sent out a Tweet after the game that suggests it wasn’t a major injury.

All right my friends! Time to take a week long break from the basketball season and enjoy some family time. ️ ️

Either way, his availability for future games will not be our decision to make, obviously, and all we can do is trust PATFO to figure it out.

(/narrator Ron Howard: “Stampler will totally not trust them to figure it out.” )

In the end the Spurs won a laugher in atypical fashion, not shooting all that well from three but making 34-of-58 from two. Their bench finally got going as a unit again, Patty Mills made a few shots and David Lee doing David Lee things, to borrow a Simmonsism. Dedmon was magnificent, with a double-double in his return and posting a plus-32, which was twice as good as the next best player on the floor. That sounds hard to do, right?

All in all, a not too shabby first half. A 43-13 record, firmly second-best in the league despite a spate of injuries to pretty much everyone but Aldridge and Mills. Most of the off-season moves seem to have worked out and they’re due to get Pau Gasol back after the break. Imagine being a Magic fan these days, having to digest their off-season moves, the failed draft picks of Mario Hezonja and Elfrid Payton —who looks like an anime character fighting a wind storm— and having to salvage whatever little they could after the Ibaka trade blew up in their face.

Better yet, don’t. There’s enough troubling news going on in the world.

By now this seems like an annual tradition, the Spurs starting the second half at the Clips. L.A. laid the smack down at home against Mike Budenholzer’s Hawks, Wednesday night, their fourth win in a row. They haven’t missed Chris Paul as much as we thought they would and Blake Griffin has gradually worked his way back to form since returning from knee surgery. As you’re likely aware, the Clippers have already knocked the Spurs around twice this season, once with Griffin and once without, and a hat trick would be really troubling, especially without Paul.