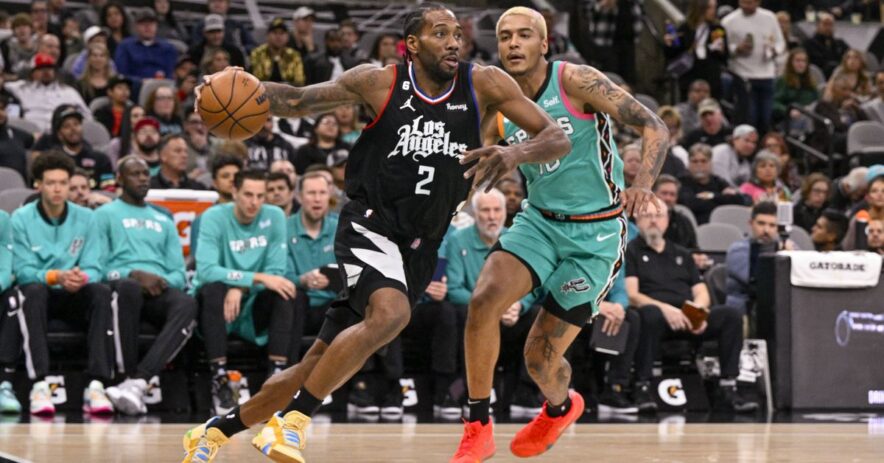 The San Antonio Spurs played tough against a relatively healthy Los Angeles Clippers squad, but a poor third quarter and a season-high effort from ex-Spur Kawhi Leonard led to the Silver & Black’s 32nd loss of the season.

The home team started fast with rookie Jeremy Sochan imprinting his blueprint *wink wink* on the contest with some impressive highlight plays. For the Clippers, it was their superstar Kawhi Leonard doing the damage with nine quick points from all over the court. The Spurs were doing an excellent job of moving the ball on offense and utilizing a high pace so as not to allow the Clippers half-court defense to set up. The first quarter should have told us how this game was going to go with a combined 77 points being scored and no defense being played at all. The LA Clippers led 41-36 after one.

The San Antonio bench unit were pushing the ball up the court while cutting and slicing to the bucket for easy points as they kept the Clippers second-guessing. With Sochan on the bench for part of the quarter, Romeo Langford took up the responsibility of defending Kawhi and was doing an admirable job of doing so, while also giving it back to the LA defense by being aggressive with his offense. It was a good overall quarter for the Spurs with them showing a ton more energy than the veteran Clippers squad and this helped with a number of second-chance plays that led to points, and a 72-65 half-time lead.

Unfortunately, the Spurs didn’t keep that energy up in the third quarter because after a few quick buckets they started to slow down the pace which helped the Clippers get some stops and get back into the contest. The one positive from the quarter was that Keldon Johnson started to find his shot after just a seven-point first half. He was attacking off closeouts and getting to the rim for either an easy layup or getting fouled and going to the free-throw line. The quarter wouldn’t have been so bad if it wasn’t for Kawhi dominating this 12 minutes stretch of play where he had 15 points on 5/6 shooting and three triples. The former Spur and Raptor was hitting everything regardless of if it was contested or wide open, he helped CLAW the Clippers into a three-point lead at the quarter’s end.

With the Spurs needing a spark to not allow the Clippers lead to get away from them, it was Stanley Johnson who hit a couple of threes to keep the home team alive. After an explosive third period from Kawhi, the Spurs were doing a much better job on him in the fourth, but because of all the attention he and his fellow star Paul George were getting, Norman Powell was taking advantage with some key moments late in the game. In the end San Antonio just ran out of steam trying to keep up with the scoring of LA, as a couple of big shots from the road team put the Spurs down for good – even with Keldon hitting a couple of miracle threes with under a minute to play – as time ran out on this young ball squad. The LA Clippers reigned victorious 131-126.

Play of the game

Little defense was played throughout, so naturally the highlight play of the night was . . . a block.

The Spurs will start a three-game West Coast road trip with a visit to Damian Lillard and his Portland Trail Blazers.