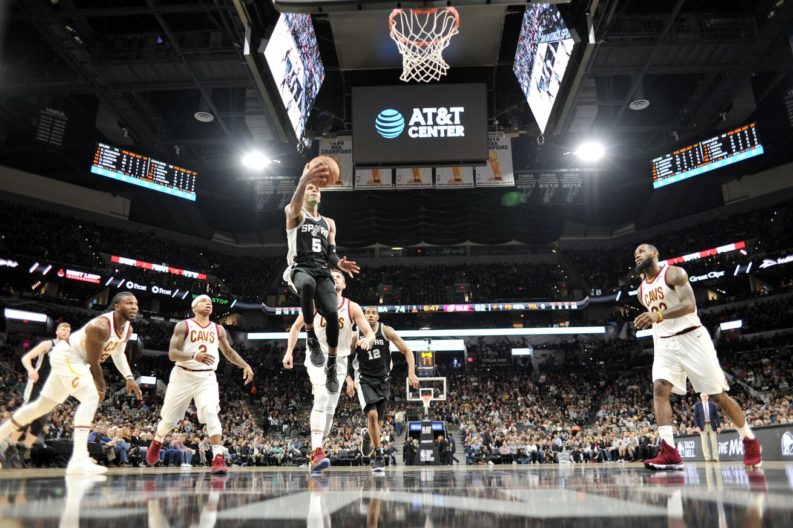 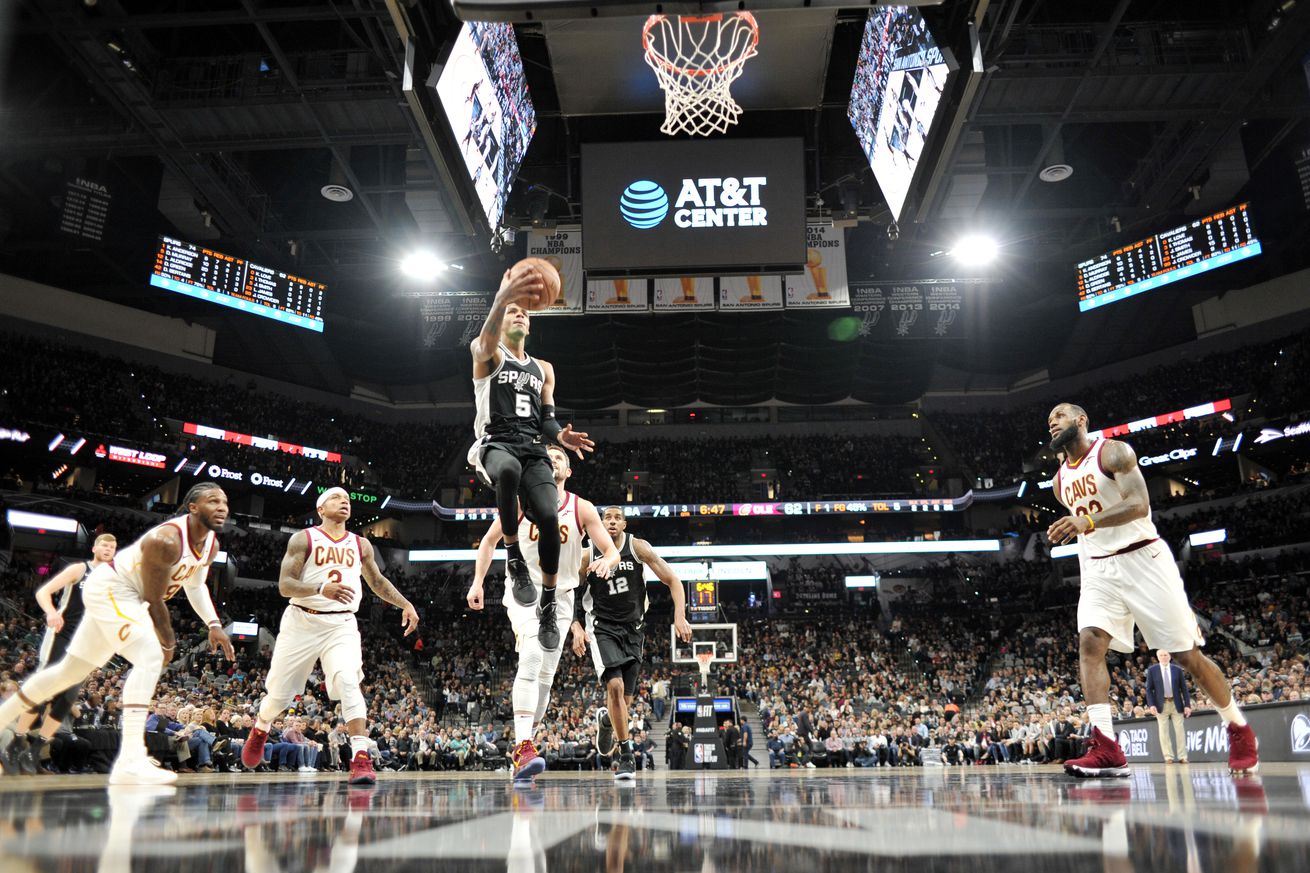 San Antonio’s new starting point guard reminded everyone that no role or stage is too big for him.

Spurs fans spent the day agonizing over the uncertainties of the present and their evening marveling at the possibilities of the future, as the team returned to its winning ways with a 114-102 nationally televised victory over the Cavaliers.

The reason for much of that optimism? Newly promoted starting point guard Dejounte Murray, who had 19 points, 10 rebounds, seven steals and three assists in 30 minutes of giddy, unpredictable action. One moment the second-year guard was turning the ball over on a seemingly innocuous entry-pass situation; the next he was eye level with the rim, plucking an offensive rebound out of the rafters and casually placing the ball in the basket.

The man who vacated the starting spot also shined on Tuesday. In just 18 minutes, Tony Parker had 14 points and six assists, penetrating with ease through the Cavs’ porous defense for easy buckets and operating in the pick and roll with his usual metronomic nonchalance. The contrasts between the two couldn’t be greater — and therein lies a new challenge for Gregg Popovich, in balancing lineups and rotations to suit each man’s strengths.

There are gaps in Murray’s game, sure, but he’s making up for it by filling up actual gaps on the floor and making things happen with his length and speed. He compensates for his offensive deficiencies by moving off-ball and looking for daylight on any offensive rebounding opportunity. His seven steals on the night didn’t come through reckless gambling or freelancing, but by making the correct rotations, getting back on transition defense, and moving his feet well.

In that way, the 21-year-old may represent the inverted, point-guard equivalent to the “unicorn” paradigm: a suite of basketball skills that are unique in their own right and that, in time, could translate into stardom:

.@DejounteMurray seems to be enjoying his new starting role pic.twitter.com/qKHIe4FpI3

Behind Murray, Parker and another stellar night from newly announced 2018 All-Star LaMarcus Aldridge (30 points and eight rebounds), the Spurs were too much for the directionless Cavs, who got little out of anyone not named LeBron James.

Aldridge remains a rock, sliding between the power forward and center slots and presenting mismatches for almost any player assigned to him. He makes an impact regardless of whether his shot is on or off, but on games like this (he was 12-of-18 from the field), it’s no surprise that he ended up with a team-best +23 plus/minus.

As for the ever-hungry Murray, the focus isn’t on the win or his performance but the road ahead: “It’s just one game. I did a lot of good things — a lot of things I can learn from and improve on.”

Before the tip, Pop raved about Murray’s nature of learning from mistakes and absorbing criticism. He also reiterated the same sentiment he’d reportedly told Parker when informing him of the change-up at point guard: “it’s time.” Uttered in a new context, about a beginning rather than an end, the words take on another meaning.

Much like his playing style, Murray’s ascendance brings a new forward momentum to the franchise, a kinetic push towards the unknown. For the 21-year-old and Spurs fans alike, the ride has just begun.

James had his customary 28-9-7 line en route to eclipsing the 30,000-point mark, and the AT&T Center crowd showered the future Hall of Famer with cheers when the milestone was announced during the next timeout. The Cavs star later expressed his appreciation for the show of respect.

Towards the end of the night, this happened:

Late in the fourth, DJ guards LBJ, and gets some encouragement after the play. pic.twitter.com/tvsiArXKDq

Beyond the fact that this might stoke more tasty, reckless speculation of James coming to the Alamo City, there’s still plenty to love about it all. Let’s review a few:

What did James say as the two headed back towards the free-throw line? According to Dejounte:

Reach? Who here is reaching?

An awkward start and a sizzling second quarter

Gregg Popovich called a timeout 14 seconds into the game, immediately following an open Jae Crowder three from the corner. A few minutes later, the Spurs were assessed a technical foul for the rare infraction of having six players on the floor.

Luckily they shook things off relatively quickly, dropping 38 on the Cavs in the second period — two shy of the season-high in a quarter set in early November against the Clippers — and maintaining a high level of focus until the end.

With Davis Bertans joining the law firm of Green, Murray, Anderson and Aldridge, the total number of different starting lineups this season went up to 16.

For the third game in a row, San Antonio shot below 30% from beyond the arc. The last two resulted in losses. This time it wasn’t the case because — well, Cleveland — but consider Tuesday an outlier in that regard. To beat most teams, better teams, and open the game for Aldridge, that shot needs to drop.

And a few final Pop pops:

On why Pau Gasol is averaging one more assist per game

“We run a One More Assist Per Game drill. It worked out really well — we should’ve done Two.”

On the changing of the guard(s)

Tony understands what’s best for our basketball team. He’s a character guy. He knows at this stage of his career, being a mentor is really important, and he’s still gonna be an important part of what we do. Dejounte’s a young talent — we need to find out exactly what we have there. So, it’s time.

Those are the decisions we make. I made the same decision a couple years back when Tony was 19 and we gave him the ball. Tony’s handled it fantastically well. A really mature, high-character individual.