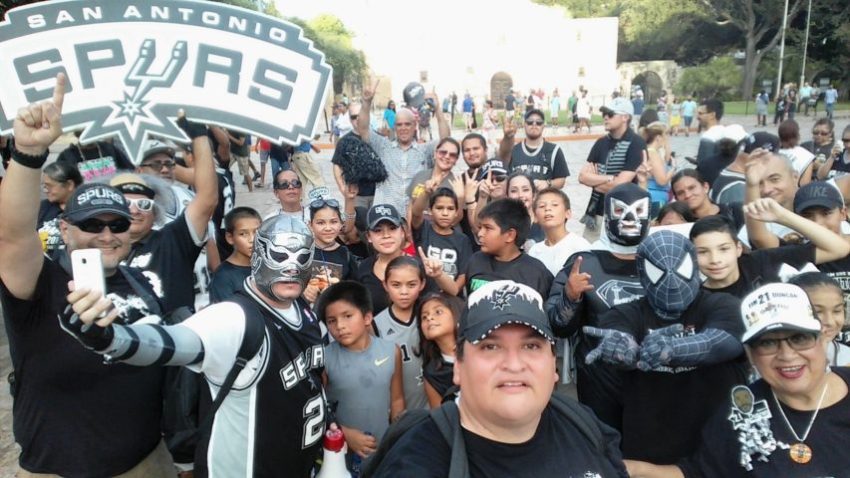 Die Hard Spurs Fans united over the weekend to honor Tim Duncan at the Tower Of The Americas with a Spurs March.

It was time for Spurs fans from around the Alamo city to unite and honor Tim Duncan with a Thank You Tim Duncan Spurs March on Saturday August 6th. The group known as Spurs Fan Cave lead by Spurs Super Fan  “Ol Skool Magee” aka Mario Sosa. Known as the crazy guy with the big Spurs sign met at the Tower Of The Americas. Joined by a number of Spurs Fans some of whom were wearing luchador mask along with members of the local media and a drum wielding fan from local group the Crocketteers. This band of crazy Spurs Fans marched towards the Alamo turning heads along the way. With chants of “21” and “Thank You Timmy” filling the streets of downtown San Antonio. People stopped and smiled took pictures, vehicles honked their car horns and rolled down the windows to yell Go! Spurs! Go!

Mario Sosa who’s alter ego is Spurs Super fan “Ol Skool Magee” said he wanted to do something to honor Tim Duncan for all he has done for the team and the city. Ol Skool Magee was quoted saying  “This is our way of saying thank you to Timmy for helping the Spurs win 5 NBA Championships and always doing it with class and respect.”  As the group came down Market Street you could hear their chants of “21” two blocks away from the Alamo as curious on lookers stopped to see where all the noise was coming from. The group soon made their pilgrimage to the Alamo and snapped their traditional photo as they have always done.

Spurs Super Fans Pose For Group Photo In Front Of The Alamo. 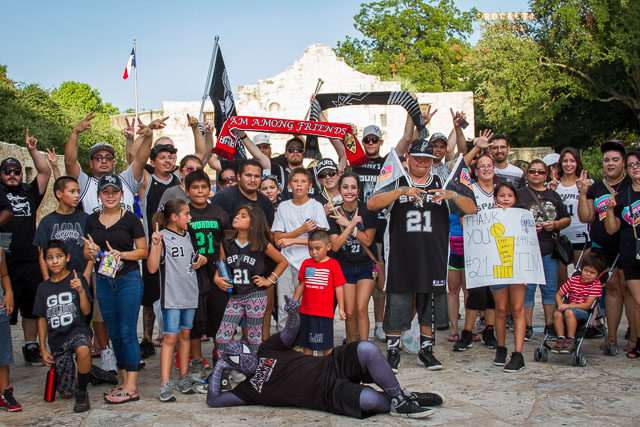 Spurs Super Fan “Rick Vela” alter ego “Spurs Nation” who wears a silver luchador mask got the crowd fired up with his bullhorn yelling Tim Duncan facts. Spurs Nation is a very passionate Spurs fan who was quoted as saying “It’s going to be weird watching a game and not seeing Timmy on the court he will be missed. But our team the San Antonio Spurs will still have a great season.”

After a quick water break the group soon left the Alamo and made the return trip back to the Tower Of The Americas. As the chants of “21” and “Thank You Timmy” faded away you can’t help but think how a player and a team can have such an effect on people. While Tim Duncan may not be on the court this coming season his presence will always live on, in the city and in the fans. With that we bring to a close another chapter in Spurs history and leave with a simple thank you Tim Duncan.