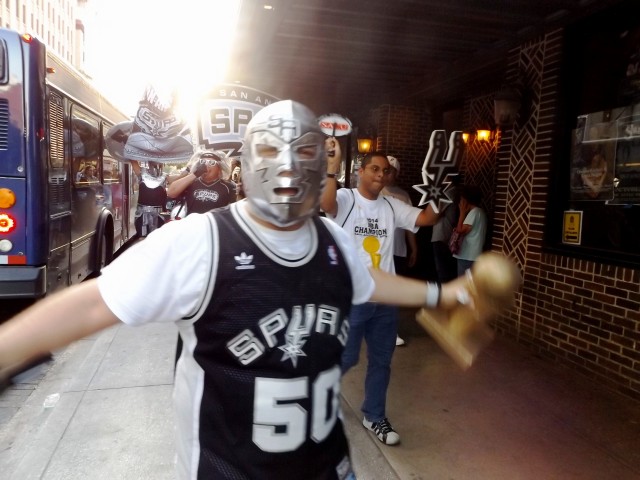 Downtown San Antonio was flooded with a sea of Spurs Fans who rallied together to welcome both the new and veterans players to the team. The Spurs March is organized and hosted by “Ol Skool Magee” the crazy guy with the big Spurs sign. Joining Ol Skool Magee were other masked fans such as Rick “Spurs Nation” Vela, Spurs Phenom and the Spurtans. The sign toting and flag waving crowd walked the streets of downtown San Antonio starting at Milam Park and ended the March at the iconic Alamo. The Spurs March was filmed by none other than the San Antonio Spurs themselves as a film crew shot the entire March. This years March was a memorable one, as the fans excitement for the team is at an all time high. With the additions of LaMarcus Aldridge, David West and Ray McCallum  along with the return of Tim Duncan, Manu Ginobili, Kawhi Leonard and Danny Green expectations of a 6th NBA title run are in sight. The Spurs March was a huge success and we would like to thank the fans along with KSAT-12, KENS-5, NEWS-4, WOAI, KABB-29, Express News and Madalyn Mendoza for their great coverage of  the March.