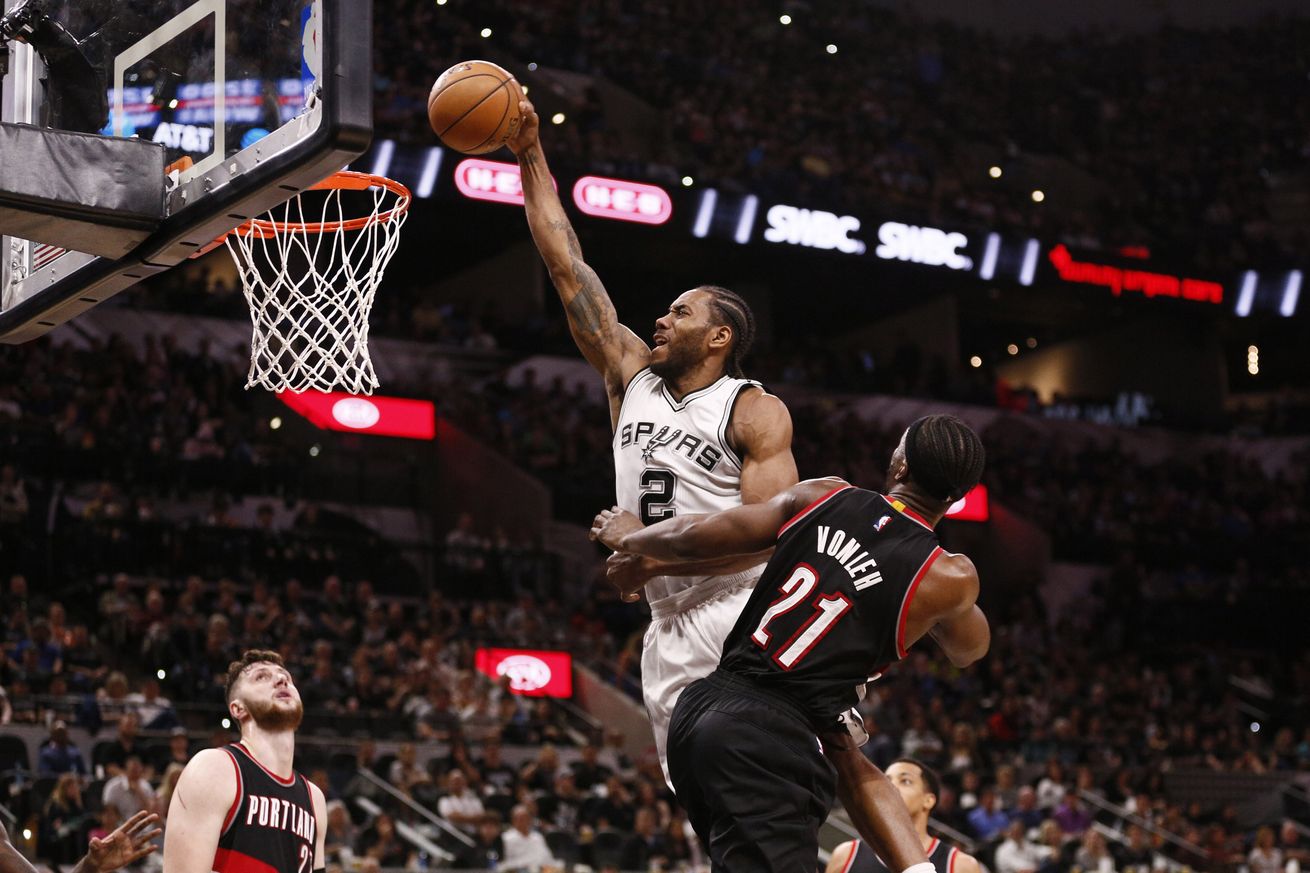 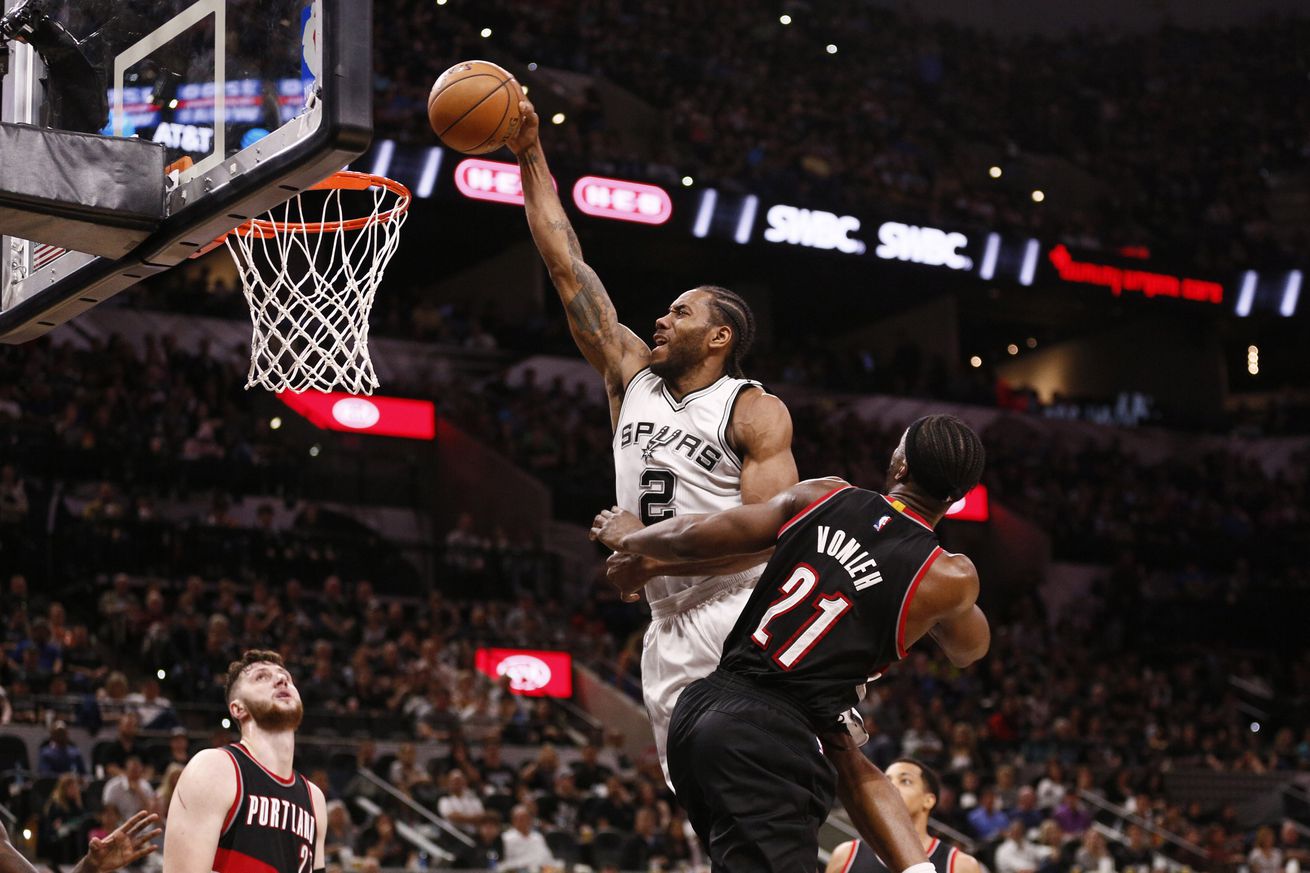 What a tough loss for the Spurs as they vie for the top seed in the West with the shorthanded Warriors. The Spurs fall one game back of Golden State as they were unable to overcome Damian Lillard and the Trail Blazers’ offense. Both the Spurs and Warriors have 15 games left to play including a showdown in San Antonio on March 29th.

It was the eighth loss of the season to teams with a sub-.500 record. Interestingly, the Spurs have lost just seven games to teams with a winning record. h/t Paul Garcia

The Blazers got drilled on Tuesday night in New Orleans but it was San Antonio that looked like the tired team on Wednesday night until it was a little bit too late. After the game Gregg Popovich noted that, “[The Spurs] played as hard as [the Blazers] did the last four minutes of the game. We had a chance to tie it, missed a layup and they got an offensive board. In a strange, counterintuitive way if that would have happened we might have won, but didn’t really deserve it. Maybe it’s a good lesson. It’s 48 minutes, we can’t wait until the end.”

Portland played a heck of a game, getting it done offensively, becoming just the sixth team this season to hang 110 on the Spurs’ league-best defense in regulation. Damian Lillard and C.J. McCollum in particular were outstanding for the Blazers, scoring 36 and 26, respectively.

It was a competitive game end-to-end with neither team opening up a lead greater than seven points in a contest that saw 21 lead changes and 10 ties.

LaMarcus Aldridge returned after missing the previous two games with a heart issue. Patty Mills continued to start in Tony Parker’s absence and Dewayne Dedmon also continued to get the starting nod over Pau Gasol. They joined Kawhi Leonard and Danny Green as the starting lineup for San Antonio.

It started off well for LaMarcus as he hit the first shot of the game, a long two, and two of his first three, but by the end of the game he had missed 15 of his 24 attempts. Disappointing sure, but it was his first game back. Popovich noted that, “he looked a little bit rusty. I don’t think he had his rhythm, but his effort was great and that’s all you can ask for.” He’s been in a slump since February, scoring 16.2 points per game on 41.4% shooting.

Patty Mills continued his solid play in place of Parker and has surely upped his contract offer sheet. He hit 5-of-10 from the field, grabbed three boards and dished six dimes to just one turnover in a team-high 37 minutes.

It wasn’t the Spurs’ night but credit the Blazers who are playing for their playoff life with an excellent performance on the road on a SEGABABA.

The Spurs were outplayed for most of the game but they had their chances at the end of the game. Unfortunately for the good guys it didn’t go their way. Manu Ginobili’s late trip to the free throw line sort of summed it up. With the Spurs down three with two and a half seconds left and no timeouts he needed to make his first freebie and miss the second. After the game he said his first one felt good but it bounced out. After that the Spurs were down to just one free throw and needed a miracle to pull the game out. Manu tried to bounce the ball off of the front of the rim but somehow it found the bottom of the net.

And that was the end of the game, Lillard made two from the charity stripe and put the game out of miracle reach. Good for the Blazers, they sit just two games back of the eighth-seed.

Your Spurs fall to 52-15 for the year. It would take a monumental slide for the team to finish any lower than second in the west, they hold a six-game advantage in the loss column to the Rockets, but with homecourt advantage throughout the playoffs so clearly in reach this game was a meaningful loss. The Spurs are in control of where they finish in the standings this season with another game against the Warriors coming but they also have the tougher schedule of the two teams.

The Spurs travel to Memphis to take on the Grizzlies on Saturday night before a quick turnaround against the Kings at the AT&T Center early Sunday night. The game against the Kings starts an every-other-night stretch for San Antonio that lasts nine games. The end-of-the-year schedule is tough for the Spurs, who won’t get two days off in a row after the next two days until the playoffs start. Expect to see guys getting rest down the stretch.