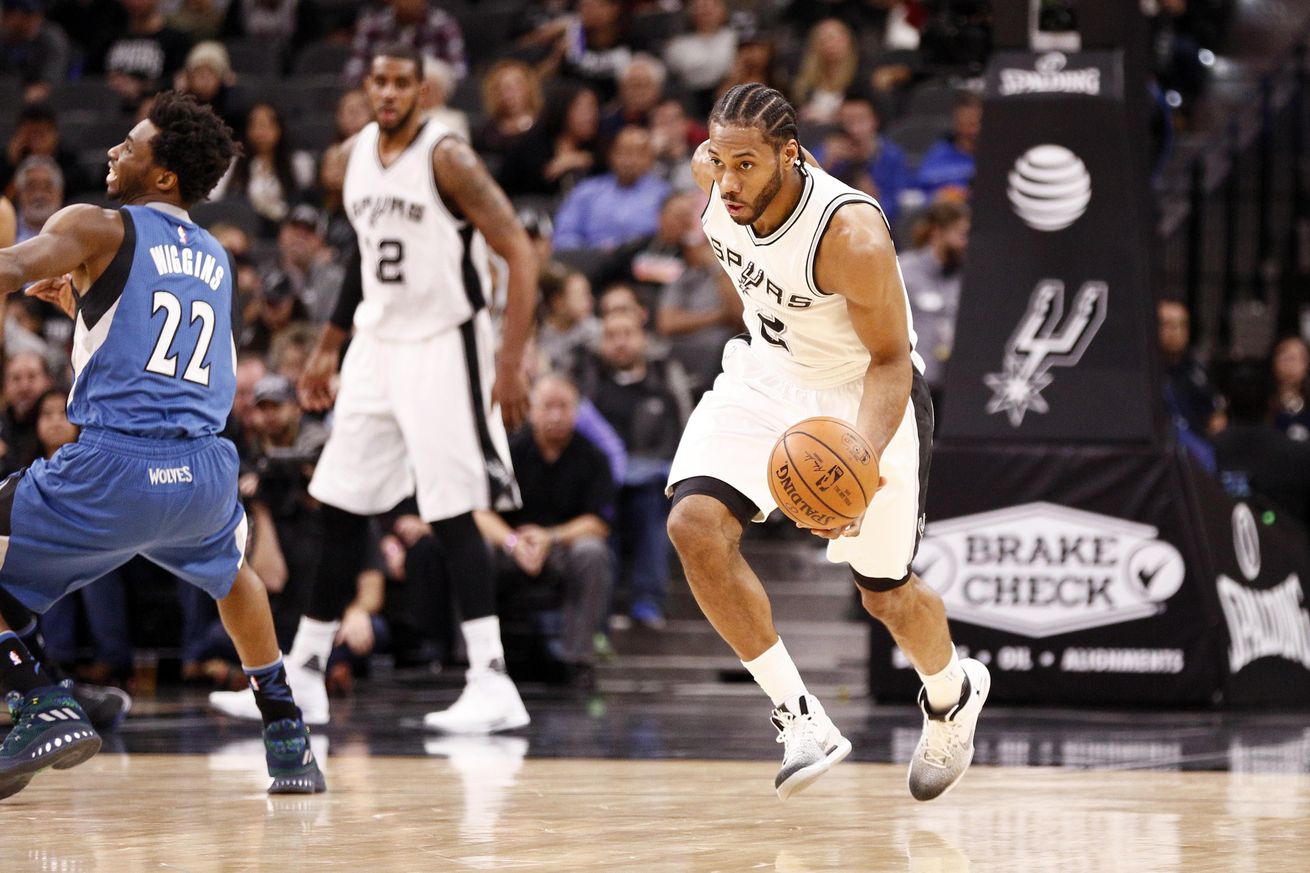 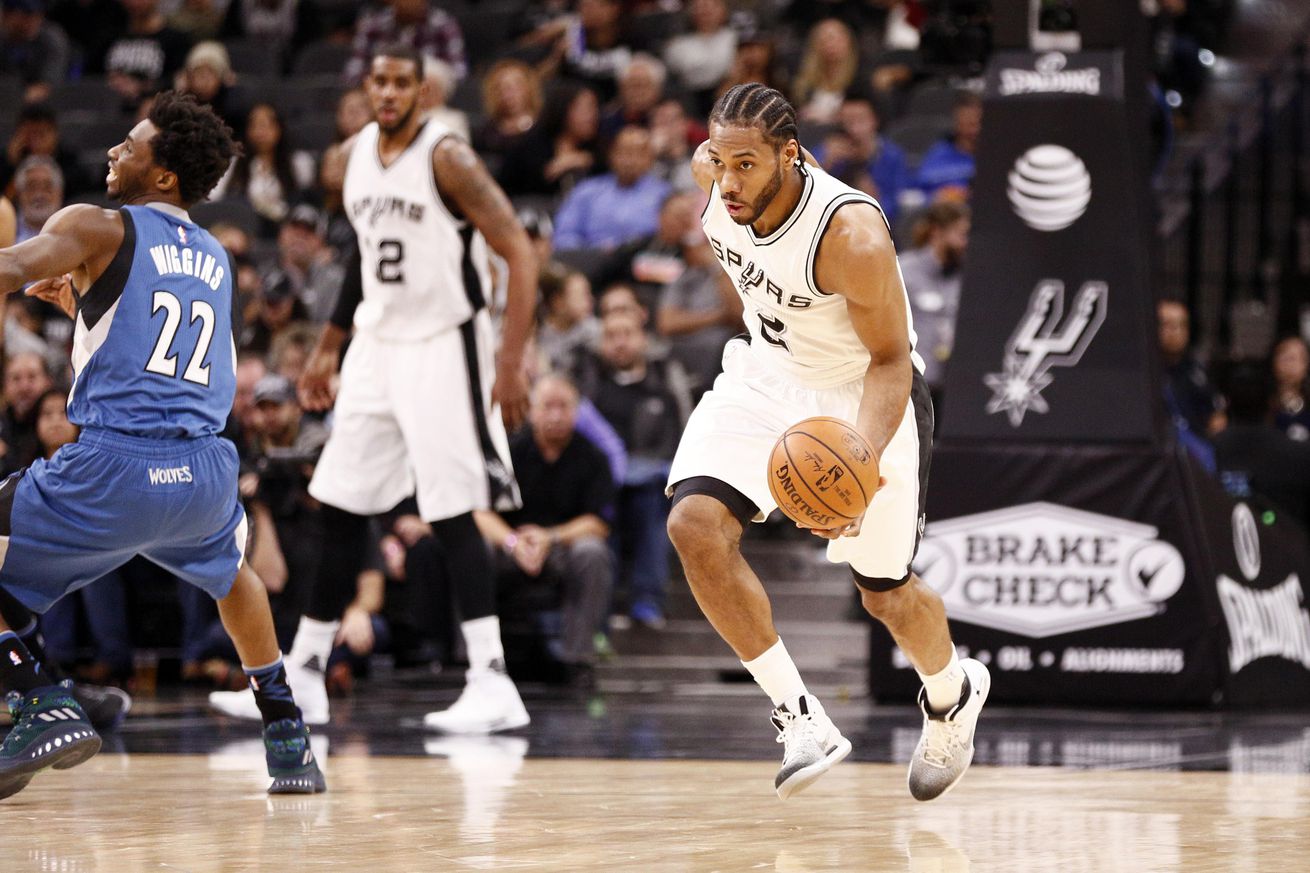 It was another game of two halves for San Antonio and the Spurs tightened up their defense in the final 24 minutes to pick up a nice home win and extend their winning-streak over the Timberwolves to nine in a row.

The Spurs have hit the halfway mark of the season, have performed very well through their first 41 games and hold the second best record in the NBA at 32-9. At times the team looks like a juggernaut, thrashing their opponents early and pouring it on for the entire game, and sometimes it goes more like it did when they took on the Minnesota Timberwolves on Tuesday night.

The Minnesota Timberwolves scored 71 points on the Spurs in the first half, knocking down 56% of their shots and hitting an incredible 29 of their 30 free throws. 30! In one half…Against a team that allows just a hair under 21 PER GAME…That’s absurd.

Luckily for the Spurs, Minnesota’s defense didn’t do much to stop the home team and San Antonio was able to score 67 points on 56% from the floor themselves. So even after giving up all of the points to a Minnesota squad that has been playing well lately (they stopped the Rockets’ nine-game win-streak and then beat the Thunder), the Spurs found themselves down just four with 24 minutes left to play.

The second half was a different story, though, with the Spurs tying up the game quickly in the third before about seven minutes of back-and-forth play that ended with Minnesota opening up a seven-point lead on an a Karl-Anthony Towns triple at the 1:40 mark of the period.

That was it for Minnesota and the Spurs finished the quarter on a 9-0 run, with Patty Mills hitting a triple and Kawhi knocking down a pair of freebies and an and-one on a triple.

Coach Popovich noted the difference in play in the second half,

We gave up 71 then we gave up 44 [it was actually 43, but who’s counting]. We gave up 30 free throws and 9 in the second half. That’s what it’s about, being physical, playing smart and we did it for the second half. So we played a great 24 minutes.

The fourth quarter started with a 6-0 run for the Spurs, part of a larger 22-3 run, and the momentum had completely changed. The Spurs were fired up and there was no doubt who the winner of this game would be just a couple of minutes into the final period. The pure-of-heart Patty Mills knew what was up.

The Spurs controlled the rest of the game, opening up a 14-point advantage at one point. Kawhi Leonard was brilliant for the silver and black, notching a 9-4-2 line in the final twelve minutes.

It’s been an interesting, fun season so far and the Spurs are sitting pretty as they improve to 32-9 in their first season without Tim Duncan. Outside of the Warriors and Cleveland, the Spurs are among a small group of teams with a chance of bringing home the Larry O’Brien this summer.

Let’s end this recap with some highlights from the game.

Check out this beautiful ball-fake from Tony Parker before he found a wide open Pau Gasol for an 18-footer. The tricky Frenchman had a good game, finishing with 14 points and five assists in 28 minutes.

It’s fun to watch Tony and Pau work off each other. Also, a serious ball fake from Parker. pic.twitter.com/RucEMDuZSE

Whi with the Manu-esque helper in transition to a hustling LaMarcus Aldridge.

*deep breath in
KAWHI LEONARD IS A FANTASTIC PASSERpic.twitter.com/7jrCjw9c1W

Jonathon Simmons was 1-for-1 from the floor (though he did go 5-of-6 from the line) but his one bucket was a beauty.

Take it to the basket, Juice. pic.twitter.com/6NNbfdqwzd

I don’t know how TP got this to go but he did!

TP gonna do this until he’s at least 58pic.twitter.com/1YbB0uSIKA

Aldridge had a quiet 29-point game, hitting 60% of his shots. He’s looking really comfortable out there with the team, in his last 10 games he’s averaging 21.6 points on 64% from the field. Check out this mean putback jam.

Danny Green struggled on the offensive end in this one, missing seven of his eight shots but he was outstanding on defense for a stretch and put in a solid overall effort, snatching four steals and adding a block on the night.

A few more angles of that Kawhi detonationpic.twitter.com/3XvlXAErxl

The Spurs stay at home for a few more days and will host the 16-23 Denver Nuggets on Thursday night. Somehow a 16-23 record is almost good enough for a playoff spot in the West this season. The eighth-seeded Trail Blazers are 18-25.

On Saturday the Spurs will be in Cleveland to take their first crack at the defending-champion Cavaliers.