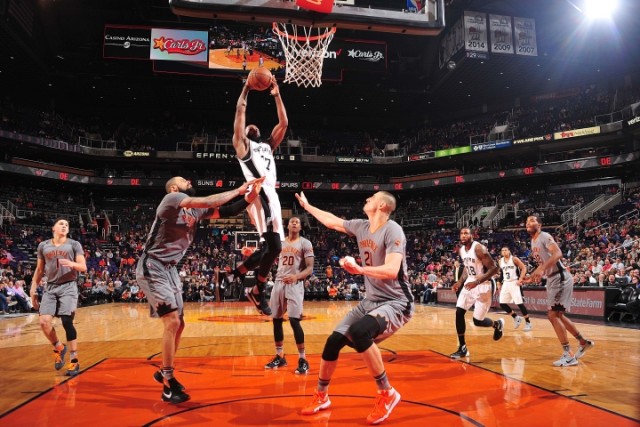 The San Antonio Spurs forward Kawhi Leonard celebrated his first ever election to the NBA All-Star game as a starter. Kawhi showed why he is fact an NBA All Star with 21 points on the night in the land of the sun.  Fan favorite Boban Marjanovic recorded his first ever NBA double-double with 17 points and  a career high 13 rebounds. This was an easy win for the Spurs over a injury depleted Phoenix Suns on Thursday 117-89.  Most notably both Tim Duncan and Tony Parker did not play due to rest and right hip soreness with Parker. With both Timmy and Tony sitting out, Jonathan Simmons and Ray McCallum got some much needed playing time.  Jonathan Simmons had 13 points and guard Ray McCallum added 11 points on the night. The Spurs who never trailed in this game against the Suns pulled within two game of the Warriors for best record in the NBA and tops in the West. Next up for the Spurs is the Los Angels Lakers today and tip off is set for 9:30 PM CST. The Game can be seen on Fox Sports Southwest and heard on WOAI 1200 AM radio.