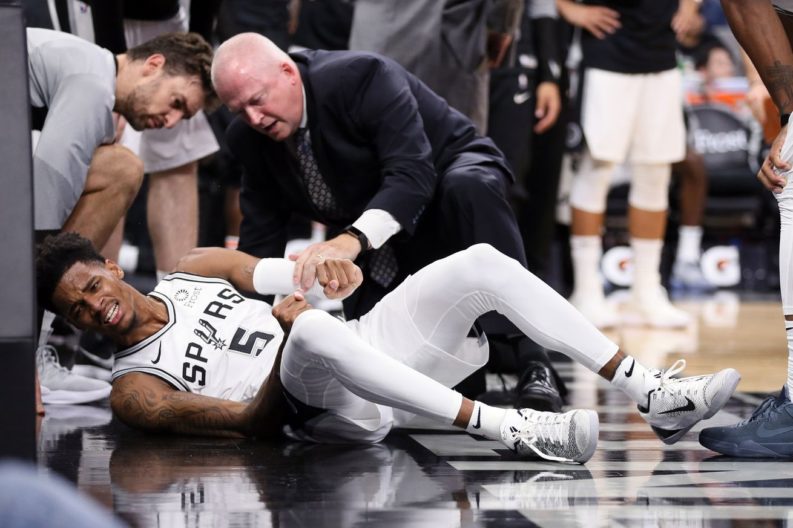 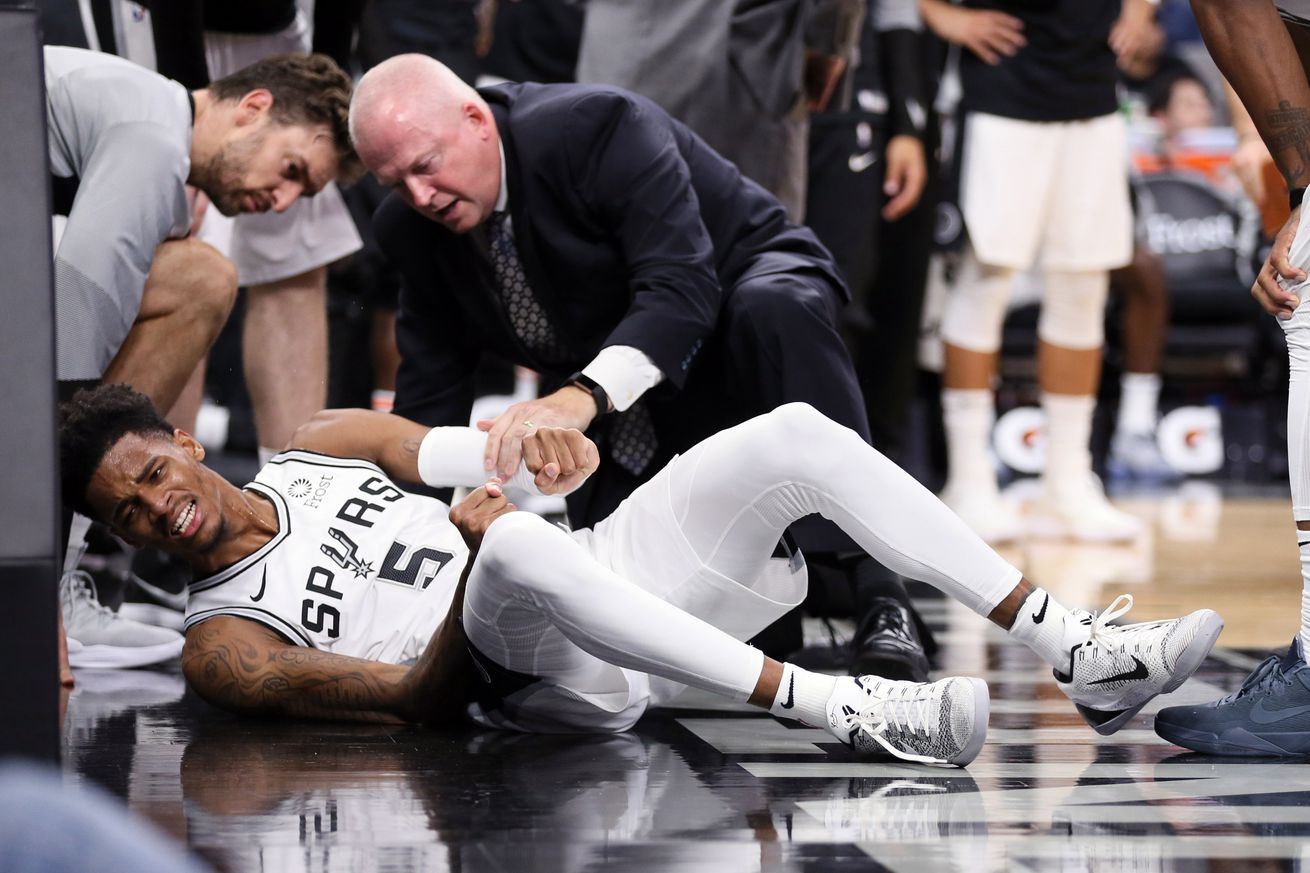 Dejounte Murray’s second-quarter exit sucked the air out of the arena and cast a pall over the final home game of the preseason, as the Spurs fell to the Rockets, 108-93.

That the Spurs and Rockets both played a basketball game on Sunday is irrefutable, even if a feed to watch it was hard to find. Whether they played the same basketball game, however, is up for debate, and a case can be made that no result or performance mattered as much as what happened with Dejounte Murray early in the second quarter.

Murray’s right knee buckled underneath him as he gathered for a shot against James Harden. Rather than planting and rising to the rim, the young guard dropped to the floor immediately, clutching his leg and writhing in pain as the AT&T Center crowd watched in silence. He stayed there long enough for the gamut of non-contact injury possibilities to run through the collective consciousness, only to receive a standing ovation as he rose on his own power, shirked the wheelchair that had been brought out for him, and walked to the locker room with athletic trainer Will Sevening. Yahoo! Sports’ Chris Haynes provided an update on Murray’s status shortly after:

Before Murray’s injury, the stakes felt aptly low for a preseason game. Beyond the contrast of coaching philosophies, Sunday’s tilt was a case of two separate exercises taking place on the same court irregardless of one another, Houston fine-tuning its basketball math machine while San Antonio still tried to make sense of all its parts. Rather than resembling one of the many chess matches that Gregg Popovich and Mike D’Antoni have treated us to over the years, the Spurs’ final home exhibition (they close out the preseason in Atlanta and Orlando) felt like an overlay of two development schemes which happened to build towards a final score.

On one end, the Rockets were their typical selves, with Harden and Chris Paul contentedly seeking out mismatches through high pick-and-rolls and hunting three-point looks in isolation (they attempted 53 threes in total, to San Antonio’s 21). On the other, the Spurs simply looked to get into their sets and give new arrival DeMar DeRozan (22 points, 5 assists) all the touches he could handle in a team-high 33 minutes. DeRozan was as aggressive as we’ve seen him since arriving in San Antonio, earning himself 8 free-throw attempts (he made 7) and making an impact on the defensive end, as well, with 2 steals and 2 blocks.

Had it been a game that mattered in the standings, the Spurs may have adjusted to the Rockets’ trademark switchiness rather than just running DeRozan through basic floppy action that did little to free him up but did plenty to acclimate him to their system; they may have turned to more small-ball lineups rather than pit Pau Gasol (who, to his credit, did pretty well and led the team with a +17 plus/minus) against the considerably shorter and quicker P.J. Tucker for a stretch of play; they may have cared that Jakob Poeltl’s commitment to crashing the offensive glass was leaving the transition defense exposed to Clint Capela running the floor the other way. But it wasn’t, so they didn’t.

For the Spurs, it’s their first loss of the preseason, and one whose only real ramifications can only be assessed following Murray’s MRI on Monday. Word of him being ambulatory post-game is a cause for optimism, and hopefully a sign that the team won’t be without its budding point guard for long.

As injuries mount, other backcourt players may need to step up

Monday will be a busy day for Spurs health news, with Lonnie Walker set to undergo surgery and Murray’s diagnosis to be determined after an MRI. If both are on the shelf to start the regular season, the rest of the guard rotation will have to step up, including a visibly stronger and more athletic Bryn Forbes and versatile second-year guard Derrick White.

Aldridge on White’s opportunity to make an impact

“He was gonna be a factor no matter what. Even with DJ, he was gonna be big… If DJ is hurt, he’s gonna be even bigger. He’s worked hard, he’s had some good experiences over the summer. Hopefully that carries over for us.”

“He’s steady, you know. He’s gaining confidence and playing like he belongs.”

While the starting lineup more up in the air than ever, Sunday’s bench group that included Gasol, Patty Mills and Marco Belinelli looked extremely comfortable playing with each other, showing off a combination of off-ball movement and passing that should remind fans of the halcyon days of 2012-14.

D’Antoni, pregame, on what he expects from this year’s Spurs

“I think you underestimate them at your peril. They traded one All-Star for another All-Star. So it’s not like all of a sudden they’re gonna fall off the grid. You got two All-Stars in Aldridge and DeRozan, you do have a young point guard, but he got a lot of experience last year. You got Gasol going in. You got Rudy Gay. That’s a lot of talent… they’re really good. It wouldn’t surprise me if they’re top four.”