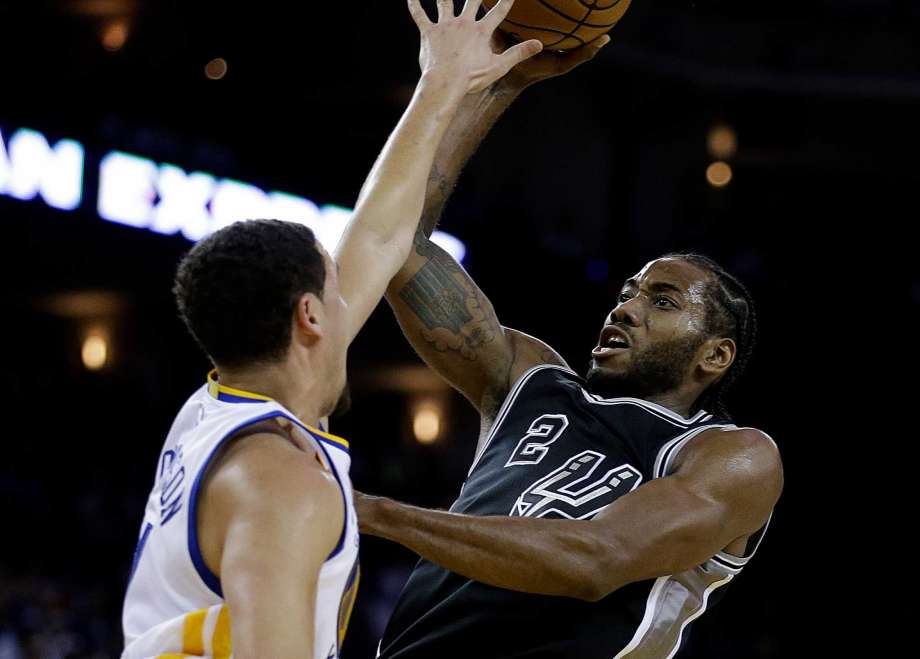 OAKLAND, Calif. – The game had long been decided Tuesday night, and Oracle Arena half-emptied out, when Spurs guard Jonathon Simmons squared up Golden State rookie Patrick McCaw at the top of the arc.

In two dribbles, Simmons exploded into the paint and rose toward the rim, either not seeing or not caring that the Warriors’ JaVale McGee was rotating toward the rim.

His thunderous dunk – going top floor over a 7-footer nicknamed the JaVale-evator – provided the final points in the Spurs’ 129-100 season-opening victory over the Warriors that nobody in either locker room saw coming.

“That surprised me,” said LaMarcus Aldridge, who already had his feet propped up on the bench at the time. “I thought he was just going to lay it in, and he just kept going.”

Simmons attempted the slam for the same reason men climb Mount Everest or go to the moon.

Because it was there.

“I was open,” Simmons said with a shrug.

There was a lot of that going around Tuesday for the Spurs, who spoiled Kevin Durant’s Golden State debut with a stunning 29-point win that seldom was in doubt.

With Kawhi Leonard turning in one of the best performances of his career, Aldridge enjoying one of his best days as a Spur and Simmons having the game of his life, the Spurs brought Golden State back to reality after an offseason spent basking in the Durant afterglow.

“A nice little slap in the face,” Warriors star Stephen Curry called it.

Leonard, runner-up to Curry for last year’s MVP award, tossed in a career-35 points to go with five steals. His 15-for-15 output from the foul line was also a career best.

Simmons, meanwhile, added a career-best 20 points — punctuated with his game-ending slam — hit three 3-pointers and ran down Curry for a transition block in the first half.

Bet that the Warriors will figure things out from here.

Having added a seven-time All-Star and four-time scoring champion in Durant, to a squad that won a league-record 73 games a season ago, Golden State remains the runaway favorite to win a championship.

“I’m guessing they’re going to be great,” Popovich said. “There’s no way they can’t be.”

The Spurs were as surprised.

“If there was an outcome I wasn’t expecting,” Manu Ginobili said, “it wasn’t this one.”

Certainly, the Warriors will shoot better than they did Tuesday night, when they missed scores of open looks early en route to a 7-for-33 night from the 3-point stripe.

Durant was as advertised in his maiden Warriors voyage, scoring 27 points with 10 rebounds. Curry added 26, though he was an uncharacteristic 3 of 10 from distance, while Draymond Green added 18 points, 12 rebounds and six assists.

Klay Thompson was the Warriors’ star most off his game Tuesday, going for 11 points on 5 of 13 shooting, including 1 of 6 from beyond the arc.

This is a battle the Warriors will fight all season.

Spurs forward David Lee, who played for the Warriors during their title-winning season in 2015, has a sense of how Kerr will manage the expectations.

“It’s a different mindset,” Lee said. “They dealt with it last year, coming in with a target on your back. Every opposing arena they go into will be sold out, the hype machine will be going and the bandwagon will be full. That creates a different kind of mental thing.”

The Spurs, meanwhile, will spend the season dealing with their own mental thing.

Tuesday game was their first opener since 1996 without Tim Duncan in the lineup.

Carl Herrera started that game at Minnesota at power forward. Greg “Cadillac” Anderson was the Spurs’ only starter taller than 6-foot-9 that night. Bob Hill, not Popovich, was the coach.

In that time since, Duncan became, among other things, the Spurs’ gravitational center.

“He was a security blanket for everybody, even if things went awry,” Popovich said. “He was like the center of the universe, and everybody knew how to act around him.”

If Tuesday’s opener showed the Spurs anything, it is that life after Duncan might be OK after all.

“It’s just one game,” Aldridge said. “We didn’t win a championship or anything like that.”

With Tuesday’s blowout win, as out-of-nowhere as Simmons’ game-ending slam, the Spurs announced something Tuesday night:

Playing this way, a championship isn’t out of the question.