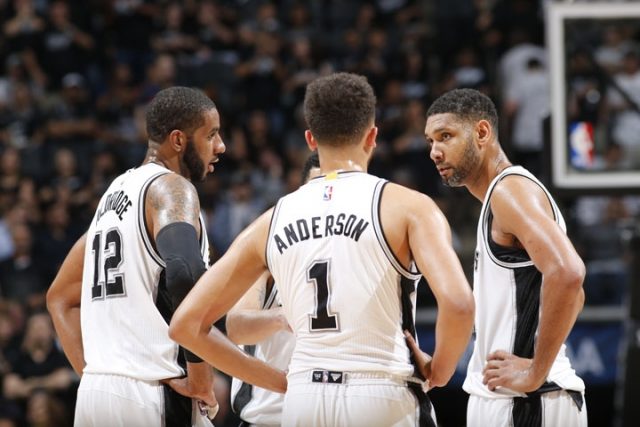 When the Spurs won their 5th NBA championship in 2014 it broke up the Heat and sent LeBron James crawling back to Cleveland. If history repeats itself and the Spurs beat OKC in this 2nd round playoff match up. Could this force Kevin Durant out of OKC and possibly have him looking to join the Spurs this off season?

That could be a possibility if Kevin Durant ever wants to win a NBA championship as he is finding out talent alone can’t take you to the promised land. You have to part of a great organization such as the Spurs who set the standard by which all other NBA teams follow.

It all starts at the front office and trickles down to an outstanding coaching staff lead by Gregg Popovich. It would seem that as Kevin Durant is getting older he is realizing you not only need a great coach but also you need to be a part of a team who plays together.

This is something Kevin Durant has been lacking as OKC has tons of talent. But when the games get close Kevin Durant and Russel Westbrook revert back to playing one on one hero ball. No one player can beat an entire NBA team by themselves as it takes team work which is something the Spurs have perfected.

With game 2 to be played between the Spurs and OKC tonight at the At&T Center much more is at stake than just a win or a loss. The future of a franchise is at stake and if OKC comes away with another embarrassing loss to the Spurs. The Oklahoma City Thunder may find themselves without the services of Kevin Durant come next season.