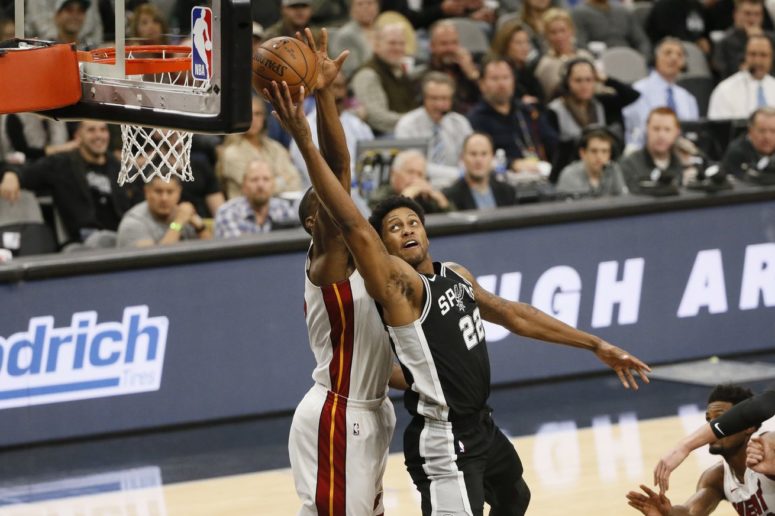 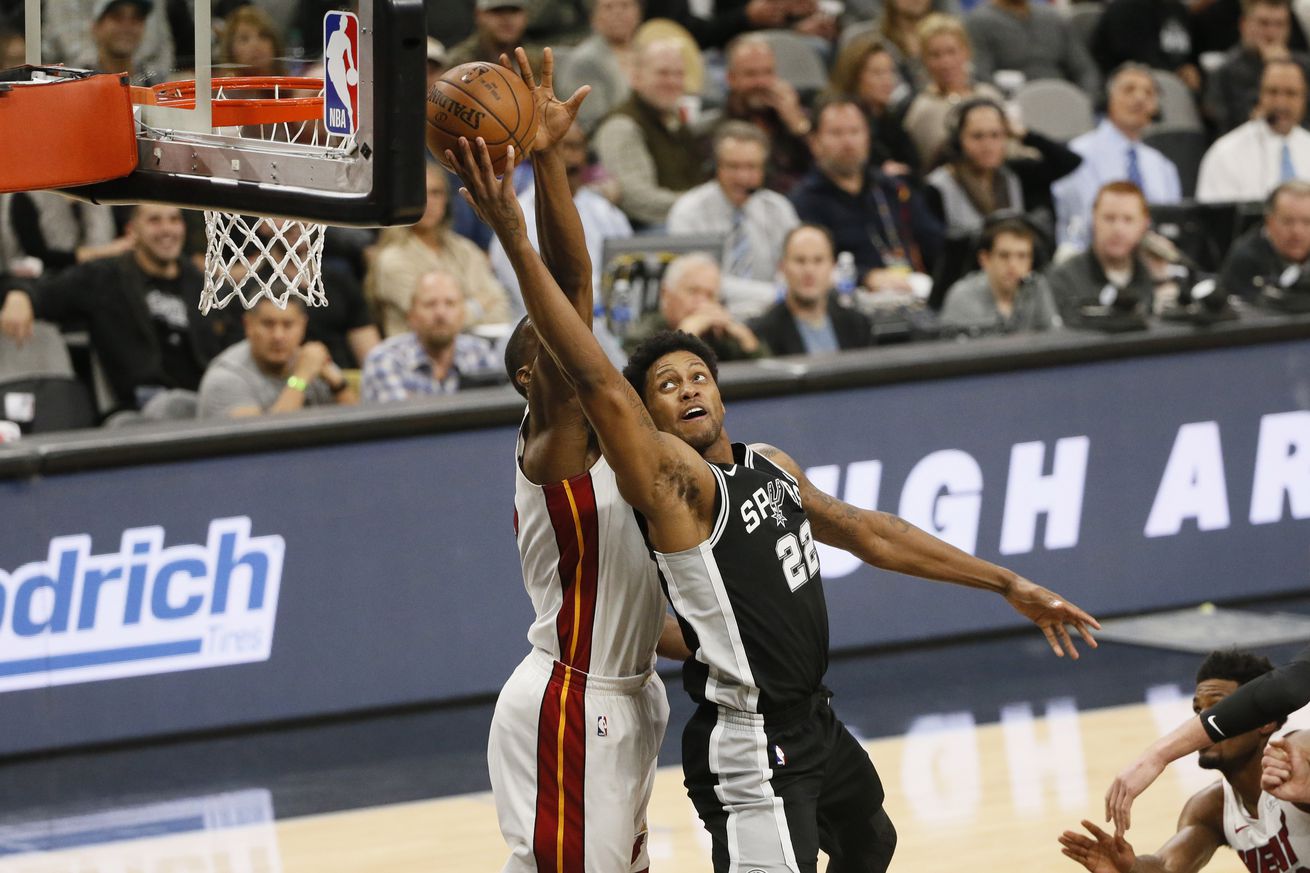 30 assists and eight players in double figures made for another Spurs-y night of basketball as San Antonio came away with the win.

From the opening tip, the ball zipped around the floor, seeking out open shooters and creating easy looks at the basket. It was the platonic ideal of selfless San Antonio basketball — the only problem was, the visiting Heat were doing it, too.

But despite an impressive early showing from a Miami team playing without Hassan Whiteside, the Spurs came away with the 117-105 win — their fifth in six games — looking increasingly like the well-oiled machine we’re used to seeing, albeit with a few new pieces.

For the second game in a row the offense produced 30 assists (this time, to just 11 turnovers). Tony Parker led the way with nine, but there’s an infectious quality to sharing the ball — everyone seems to get involved — and it can lead to some unlikely heroes. On Wednesday it was Bryn Forbes, who scored 17 points on 6-for-8 shooting from the field, including a perfect 5-for-5 on threes, that found himself finishing those possessions.

In both his body language and his performances thus far, Forbes always looks ready to prove himself, his neck tilted forward, his shoulders perpetually squared up and prepped for a quick catch and shoot. The team’s only guy on a non-guaranteed contract continues to make the most of every opportunity he gets on the floor, captured best by his 0.344 points per touch — second only to LaMarcus Aldridge.

Pop spoke well of him afterwards:

“Bryn’s come a long way. He spent a couple of years in the D-League, [didn’t get drafted]; he’s worked on both ends of the court. He’s trying to carve out an NBA career, and he’s doing very well.”

Forbes was one of eight Spurs who scored in double figures, making up for a tough night offensively for Aldridge. Going into the game, Erik Spoelstra had stressed the importance of containing the Spurs big man after he dropped 31 on them earlier in the season. The Heat frontcourt consistently forced LA into difficult looks, as he missed 10 of his first 15 shots en route to a quiet 18-point night.

The Heat were also surgical operating in the half court — especially in the first half when they collected 19 assists on 23 baskets — and hit 16 of their 27 three-point attempts on the night.

“In the first half, they executed really well,” said Pop. “They were hard to guard — we gave too many points, too many open shots, but it’s because of their movement and their execution. In that respect, it’s a good win; a good lesson for us.”

The Spurs are coming into their own — a process that is both collective and external as well as personal and unique to each player’s individual arc.

There may not be one more fascinating right now than Rudy Gay’s. The veteran forward got his second start as a Spur, putting up 16 points, 7 rebounds, 3 assists and 3 steals, much of it on the fly as he continues to find his way in an unfamiliar role, on a new team:

“Every once in a while he knows the play,” Pop (half) joked. “But we stayed in basically a little bit of motion for a lot of the game when he was out there. So he could just play basketball. He’s a good player — he doesn’t need me to coach him on how to score — he does that well. I just coach him at the defensive end.”

Gay is learning — not only what he should and shouldn’t do, but perhaps what he can’t. At least, not yet. On two occasions he found himself in the paint, attempting type of above-the-rim finish he’s been accustomed to completing throughout his career. On both occasions, he missed.

“That’s what I just have to get over, is being able to know that I can do it. Obviously learning how to get my feet under me again, and being able to be explosive. Those are plays I know I can make — that I usually make — and now I know. So, I can get back to being me.”

While some things may take longer than others to come around, Gay seems to be fitting in just fine with the Spurs’ style of basketball.

Even playing within a truncated system that he’s still figuring out, he’s shown a knack for and willingness to make plays for his teammates, a part of his game that’s long been underrated.

“It comes from everybody being willing to make the pass. For us to be successful, we have to find the open man and pass up the good shot for a great shot. We’ve been doing that well these past two games. I think that’s one of the great things about this system — everyone’s playing for each other, and that ends up in the win column. That’s part of the reason why I came here.”

Gay’s already doing — and saying — a lot of the right things, but his continued assimilation will play a big role in how far the Spurs go this season.

He’s certainly off to a strong start.

And a few more notes…

Pop, on how Gay has progressed since arriving in San Antonio

“He’s done well, I’m sure he’s had moments of total confusion – as I have, as I look at the court I’ll think ‘is he a four, is he a three?’ I’ll call a play, it’s the wrong play. It goes both ways, but he’s figuring it out.”

Gay, on getting by with a little help from his friends

“Obviously I’m out there with a lot of guys with a lot of experience in this offense, so they coach me during the game. So, give kudos to them, not me. I’m asking questions all game. It’s a good place to be in. They just have to be on their Ps and Qs because if they’re wrong, I’m telling Pop.”

Unseasonably hot shooting from both teams

You wouldn’t have known heading into Wednesday that it was a matchup between two of the league’s lowest-scoring offenses. Both the Spurs and Heat shot over 50% from the field and from deep, combining for 31 three-pointers.

Parker appeared to limp briefly in the first quarter. Moments later, Ginobili’s knee buckled and he had to go back to the locker room and you could fit an ocean of time in between when he did and came back, before the end of the period. Parker’s 10 points and 9 assists were enough to suggest he was feeling fine, and Ginobili provided an update on his condition following the game:

Manu said it hurt when he injured his knee but he doesn’t think he’ll miss anytime.

Whatever this was, by Pau

“Grace” is rarely the first word that you’d attach to Gasol’s game these days, but the shot he made to close the third quarter was truly special, an off-balance flick that still counted as two points, and still elicited Gasol’s customary gesticulating to the nearest official.