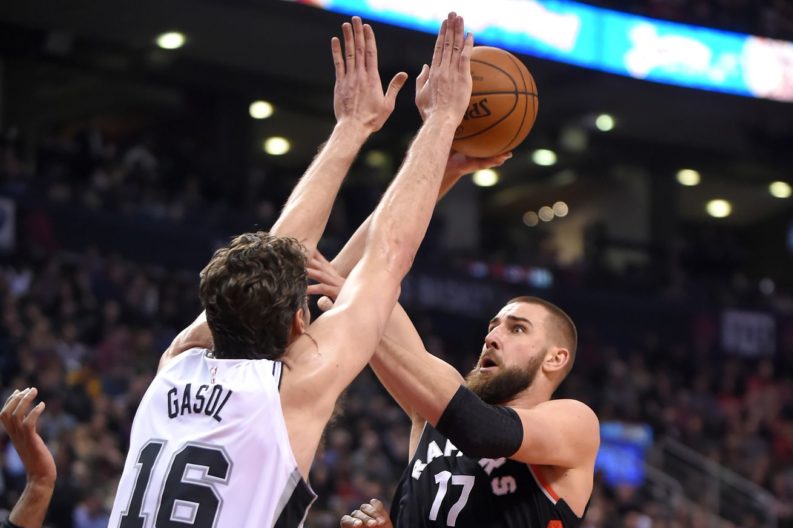 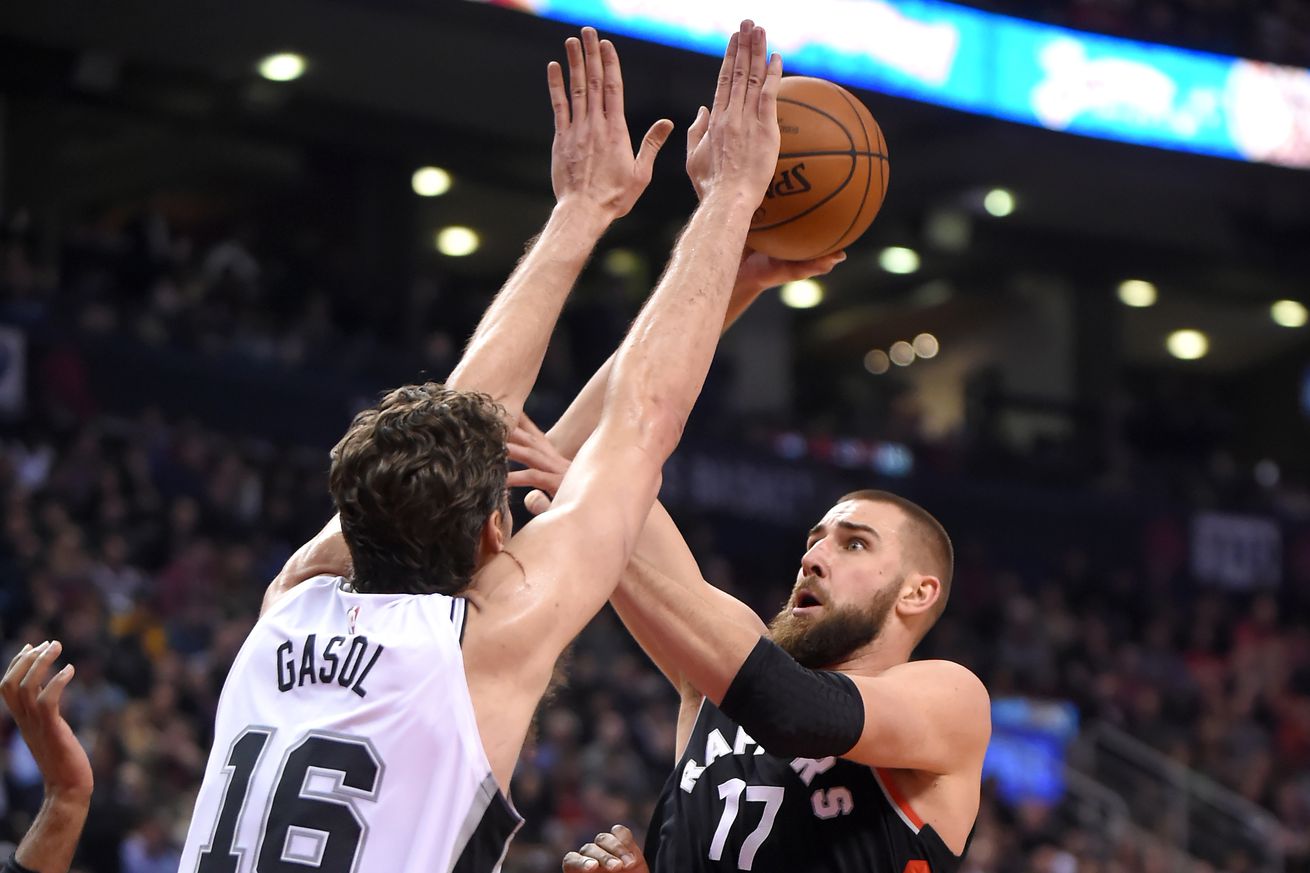 The Spurs never stopped fighting but couldn’t get enough shots to fall in Toronto.

Another short-handed road game, another loss for the San Antonio Spurs. It hasn’t mattered who the opponent is on the road; the Spurs have lost to teams ranging from the Houston Rockets to the Atlanta Hawks.

Tonight felt like another inevitable loss against the Toronto Raptors, who own the third best record in the league (31-13) and the second best home record behind the Spurs. The Spurs came in with their usual efforts on defense and put up quite a fight, but once again offense let them down away from the AT&T Center.

The starters started hot enough, racing to out to 16-8 lead behind eight points from Pau Gasol, but everything stopped falling from there and they only led 18-17 at the end of the quarter. Without Manu Ginobili, Kawhi Leonard and Rudy Gay, Gregg Popovich had to go with some odd line-ups at the wing, and tonight he elected for defense over offense, going with Dejounte Murray as his first guard off the bench.

It didn’t seem like a bad idea going up against a team with Kyle Lowry and newly-minted All-Star stater DeMar DeRozan. Overall the Spurs couldn’t have done much better on that end of the court as the Raptors shot under 40 percent for the game. Lowry (24 points) and DeRozan (21 points) had typical nights but were overall held in check. The problem was on the other end, and the odd line-ups didn’t help.

The second quarter started with Tony Parker, Patty Mills, and Bryn Forbes all playing together, and after nine quick points from Mills everything went downhill. The Spurs had some rotten luck with multiple shots jiggling out and missed 16 straight shots in an eight minute stretch spanning the second and third quarters, changing what was a tied game at 35 apiece to a 50-37 deficit in the third.

The Raptors would get up by as much as 14 a couple of times before the Spurs finally picked up their aggression on offense, starting with LaMarcus Aldridge. Although he had a rare horrific shooting night (6-25), his aggressiveness helped spark a 19-7 run to get the Spurs back within three heading into the fourth quarter 63-60.

Unfortunately, once again the offense would abandon the Spurs. They managed to stay close thanks in part to the Raptors own shooting woes, but every chance they got to either tie or take lead, they couldn’t capitalize and the Raptors would respond and get lead back to five. Eventually the Raptors got the lead out to nine, and that seemed like it would be too much of the Spurs to overcome.

However the good guys never stopped fighting. Down 84-76 with just 30 seconds left, the Spurs nearly orchestrated a miracle comeback. Murray tipped an Aldridge miss back in, and Gasol took advantage of a Toronto turnover to hit free throws and make it a four-point game with 11 seconds left. DeRozan responded by hitting his free throws before Forbes only took 3 seconds to hit 30-footer to make it a one possession game with 6 seconds to go.

DeRozan missed his next two free throws, but without a timeout the Spurs couldn’t advance the ball and missed the Hail Mary three at the buzzer for the 86-83 loss. On a night when, as Matt Bonner said afterwards, the Spurs couldn’t throw the ball into Lake Ontario with Aldridge and Mills (1-9 from three) ice cold, just getting within a possession against the surging Raptors felt like something for this road-weary squad.

No one will ever be happy with a loss, but hopefully this was a team building experience, and the Spurs will be ready to take off on their up-coming homestand. After going 5-6 on a stretch of 9 of 11 road games without any consecutive wins, the good guys will be happy to return home for seven of their next eight games, where they can hopefully turn both their game and health fortunes around before the Rodeo Road Trip.

It’s really tough giving this one to someone who shot just 6-25 from the field, but he didn’t get down on himself and the effort was there all night. That’s not something that could be said very often last year.

The only other possible candidate would be Gasol, who was the only player besides Forbes to hit more than half of his shots on the way to 15 points and 9 rebounds, but his performance just didn’t feel as impactful as Aldridge’s. Even though he got the Spurs going with his early eight points and scored seven clutch points in the final 2:30 to help with that near-comeback, he wasn’t there in the middle of the game when the Spurs were seriously struggling to score, and as stated above Aldridge is the main reason the Spurs even got back in this one, so I’m giving it to him.

Once again, there’s not much to like about a loss, but I will say this is one I’m not really upset about. Some of that is simply coming from expecting a loss on the road against one of the few teams with a better record while extremely short-handed, but also this wasn’t one of the Spurs’ typically bad road showings. Their defense was excellent and the effort was there. A few more friendly bounces or simply a poor instead of extremely-poor shooting night from Aldridge or Mills and this game could have easily gone the other way.

I just didn’t like some of Pop’s rotations. Obviously that happens with the Spurs being so shorthanded on the wing, but on a night where they were extremely offensively challenged, it felt like Forbes, who was 3-3 for the night, should have seen more court time. Of course that puts the defense at risk, but part of Aldridge’s shooting woes came from frequent double-teams due to the lack of three-point shooters, especially when he shared the court with Murray and Kyle Anderson. It just feels like more than 19 minutes apiece from Forbes and Davis Bertans may have helped the offense a little more.

The Spurs return the AT&T Center on Sunday to take on the Indiana Pacers. Tip-off will be at 6:00 PM CT.