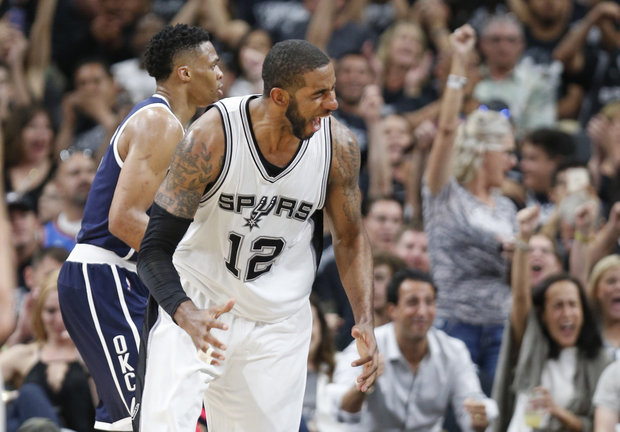 SAN ANTONIO — If they needed a reminder, the Spurs could always dig deep into the NBA annals to the 1985 Finals where Magic Johnson, Kareem Abdul-Jabbar and the Lakers were thumped 148-114 at Boston Garden in the series opener by the Celtics. It became known as the Memorial Day Massacre.

It was memorable, indeed. Mostly for the way the Lakers came back to win the next game and went on to claim the crown, the first time they ever beat Boston in the playoffs.

For a dive not nearly as deep into history, the Spurs could look back just a year ago to a 100-73 thumping they laid on the Clippers for a 2-1 series lead. Then the Clippers came right back to win Game 4 in San Antonio and went on to eliminate the Spurs in the first round.

In other words, it’s one game.

One big, ugly, hurtful bruise of a 124-92 haymaker that the Spurs delivered to the jaws of the Thunder Saturday night in Game 1 of the Western Conference semifinals. But the veteran club isn’t expecting OKC to roll over again.

The Spurs shot 60.7 percent in the opener, hit 9 of 15 shots from 3-point range, scoring 73 points by halftime and building a lead that reached a ridiculous 43 points. LaMarcus Aldridge went 18-for-23 for his 38 points and Kawhi Leonard was a two-way monster.

“I think that after a game like that you are worried,” said Manu Ginobili. “I mean, the tendency is to be satisfied so you get to worry about the next one because it’s a natural tendency. Hopefully, we don’t fall for that……Read More