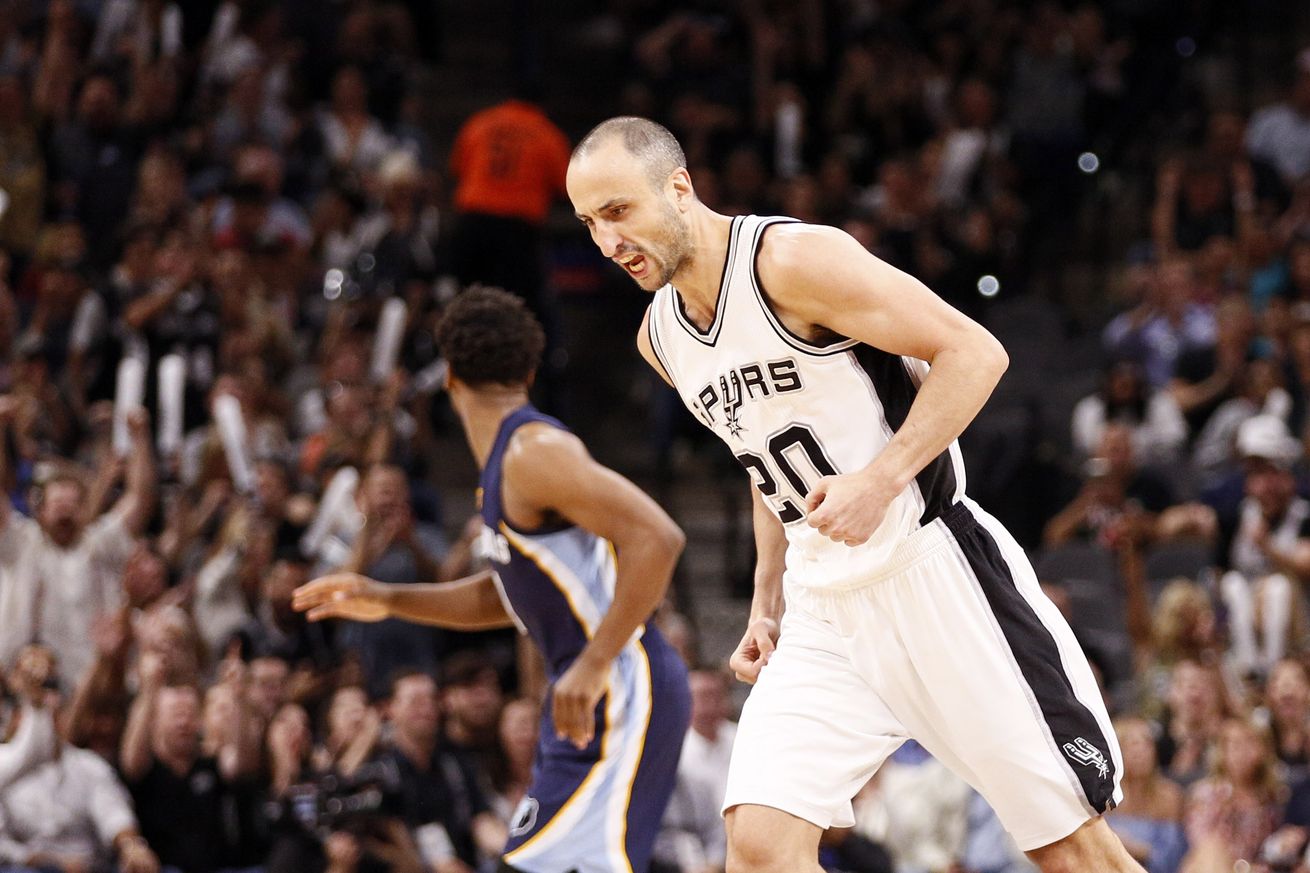 San Antonio took a 3-2 series advantage over the Grizzlies with a balanced effort from the team.

Gregg Popovich is now 6-0 in first-round game-fives when the teams are tied two games apiece.

Pop’s perfect streak was helped by solid team play from the Spurs, with six players scoring in double figures. It was a nice sight after a tough game-four loss that saw a superhuman performance from Kawhi Leonard and not much from the rest of the Spurs.

But in game five, Kawhi, who dropped 28 on 16 shots, got help from a rejuvenated Manu Ginobili. Gino scored his first points of the series, bringing what Patty Mills called “Grandpa Juice” and fired up his teammates. Pop called Manu “fantastic” and and said that “[Manu] having a good night, starting out the way he did, was really a big boost.”

Manu Ginobili FINALLY scores his first points of the series (after four games and 59 minutes of playing time)! #GoSpursGo pic.twitter.com/TrIOWAsHQb

Manu did most of his scoring damage early, dropping eight of his ten points in the first quarter on that and-one, a triple and this beautiful bucket.

The Spurs opened the game up a little in the second quarter, outscoring the Grizz 32-26, with some quality shooting. The team shot 63% in the period and hit six of their nine triples (the Spurs hit 14 triples for the game on 50% shooting).

A quick 4-0 Tony Parker run put the Spurs up 10 a minute into the third quarter and it looked like the Spurs were going to run away with the game as they built a lead as big as 18 with three minutes left in the quarter but the Grizz fought their way back into it.

Then a 7-0 Memphis run made it a four-point game two-and-a-half minutes into the final quarter. With their backs against the wall, Memphis pulled together a 17-3 run in about four minutes of game time, mostly with spectacular play from Mike Conley. Conley scored nine of those 17, notched a steal and assisted on a JaMychal Green corner three.

But the Spurs responded, first with this sweet dish from Kawhi to David Lee for the and-one jam.

And then Leonard and Mills put the game away as Kawhi scored eight points in the middle four minutes of the quarter and Patty chipping in by hitting four triples, the last of which put the Spurs up a comfortable 15 points with under three minutes left to play.

HAVE A 4Q, BALA! pic.twitter.com/MA7KUwwD2D

The game was noticeably less physical than the previous two contests, and both teams were better offensively, each shooting over 50% for the game. After the game Memphis coach, David Fizdale, said, “if you give up 116 points to the Spurs, you’re probably not going to win.” I expect Memphis to get back to muddying up the game when they host game six.

The whiteboard in the locker room now reads 13.

That assist. That shot. pic.twitter.com/NofTDyHe38

Have a game, bala, have a game!

20 points for @Patty_Mills tonight and a monster fourth quarter! pic.twitter.com/r20xEKhfVY

Game Six is in Memphis on Thursday night and tipoff is at 8:30 Spurs time. You can catch the game on Fox Sports Southwest and TNT.