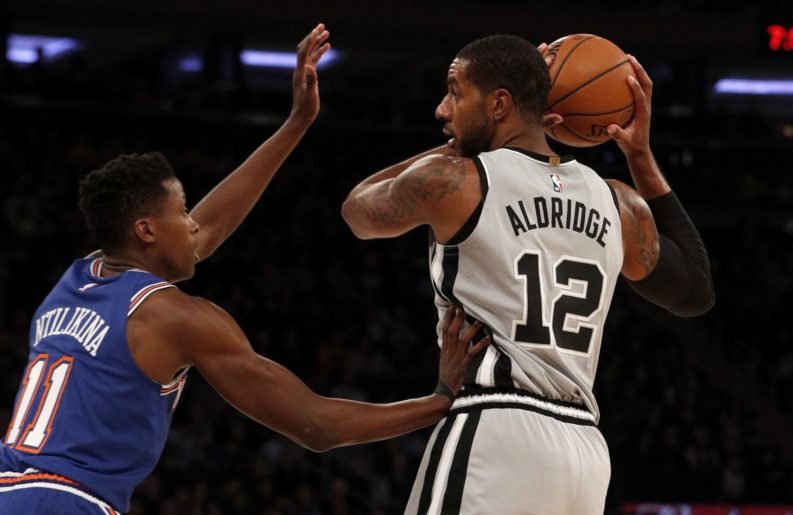 Now is the time of the year when you can typically see more and more hypothetical trade pieces start to pop up. The NBA Draft is just around the corner and teams are jockeying for their preferred positions and using players to move up and down the board. The San Antonio Spurs are not immune to this.

In a recent article for Bleacher Report,  Preston Ellis suggested that the San Antonio Spurs move DeMar DeRozan to the New York Knicks in exchange for Frank Ntilikina and the LA Clippers 2020 first-round pick. Compared to some of the other proposed deals in the article, this is a reasonable deal that could legitimately happen on draft day.

As Ellis outlined, the season suspension and financial ramifications of COVID-19 could make DeRozan less inclined to opt-out of his deal with San Antonio, setting up a situation where he would be an unrestricted free agent in the summer of 2021. If that is the path he chooses to take the Spurs would be wise to move him.

We’ve extensively covered the ramifications of DeRozan’s impending free agency, his reported unhappiness in San Antonio, and his viability as a trade asset. All in all, DeRozan’s situation in San Antonio seems shaky at best. He’s a great player, but he’s getting in the way of the development of younger guys. He’s one of the most consistent scorers on the team, but his sub-par defense isn’t helping the Spurs tally meaningful wins with him leading the way.

While Ntilikina isn’t what the Spurs need right now, it would be better to get him and a first-round pick in return than to see DeRozan walk away next summer. Yes, Ntilikina’s fit on the Spurs would be even more questionable than DeRozan’s. The team doesn’t need another point guard who specializes on defense but brings very little offensive value.

There are fair critiques of Ntilikina’s game but to be fair I don’t think he’s been in the best environment in his three years in the league. The Knicks are far from a stable franchise and don’t have a great track record of developing young talent over the past few years. Ntilikina is just 21-years old, he has plenty of time to work on his game before his best years are behind him.

If San Antonio does decide to do a deal like this, they’re not locked in to keeping Ntilikina or whatever player they get in exchange for DeRozan. They could just as easily package Ntilikina and the proposed LA Clippers with their own 2020 first in order to move up in the draft to select someone like James Wiseman.

Speaking of that Clippers pick, now is the year for late-round steals. This draft is light on All-Star level talent but you can find solid role players deep into the depths of the first round and into the second. Currently, the Knicks would be getting the 27th overall pick from the Clippers. That’s right in the range where the Spurs could select Leandro Bolmaro or Jalen Smith.

In any case, if DeRozan does decide to opt-in on the final year of his deal the San Antonio Spurs would be wise to move him before draft day. Whether its to New York or another team it makes little difference, better to get assets you can get creative with than to lose him in a year for nothing or overpay him.

Next: Spurs: Tony Parker opens up about aspirations to own NBA team

So what do you think, Spurs fans? Should the silver and black make a deal this summer to move on from DeMar DeRozan? Or should they run it back for one more year together?