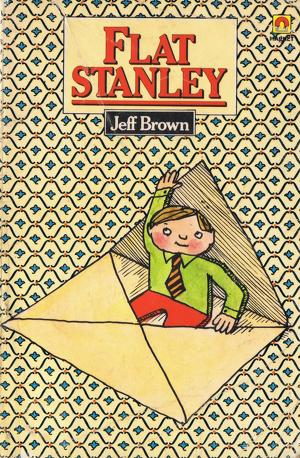 Imagine going to bed one night only to have a bulletin board fall on you while you slept. Rotten luck, isn’t it? Makes you wonder why someone put it there in the first place. But now imagine you had some seriously heavy stuff pinned to that bulletin board, like bricks, and when it landed on you, it flattened you. And I mean literally.

You wake up in the morning and look in the mirror and, OK, you’re fine from the front, but when you turn sideways, uh oh, you all but disappear. I imagine it might come as a bit of a shock. What must your internal organs look like?

But when it happened (in a make believe sense) to young Stanley, he barely faltered. He took on the moniker of Flat Stanley and in doing so discovered he could do some wonderful new things.

Forgotten your keys? Don’t worry, Stanley can now slip under your door and open it from the other side – and because it’s a children’s story there’s nothing weird or sinister about that. Thieves stealing paintings from your art gallery? Don’t worry, Stan can disguise himself as a painting and wait, watch, and catch the culprit.

He can fly on the breeze like a kite, roll himself up like a poster, god knows why, and even hop into an envelope and be posted as a letter to anywhere in the world, saving himself hundreds of pounds on standard air travel every year. He is the total (weighed and correctly priced) package.

Why haven’t we played as someone like him yet? He’d make a brilliant detective. Think of all the doors he could slip under, and the hiding spots he’d find when the suspect inevitably returned. He’d even make a great villain. You could hardly keep him behind bars, could you?

Equally, I’d settle for floating around as Stan in a breezy and papery platform world. And I think it’s that, that inherent cheeriness, I remember most about the books. Incidentally, I was surprised to find out the books stretch all the way back to America in 1964, where author Jeff Brown created them. I always thought they were an obscure British thing from the 1980s, from my childhood, which is probably exactly what you expect a British person to say. But I was wrong. Those books must have graced many childhoods, and I wonder if they had a hand in teaching those children something about the world, too.

Because within the world of Flat Stanley, there’s always the sense everything will be OK. Even when plucky Stan’s enthusiasm falters – as inevitably it would, having undergone a life-changing bulletin-board trauma such as he did – he has someone there to pick him back up. Or rather, pump him back up. It’s his brother. His brother with a bicycle pump. Thanks, bro. I really needed someone and you were there.

Being with Stan was a nice place to be.