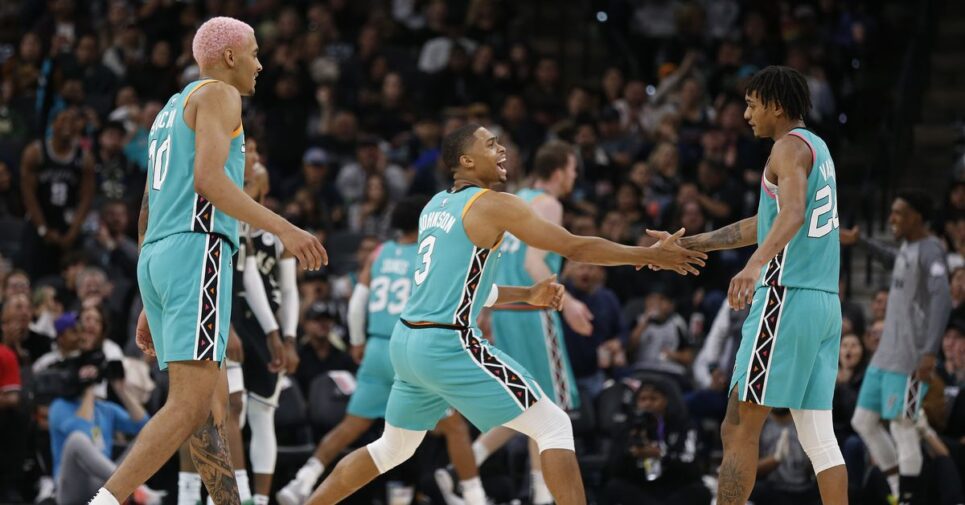 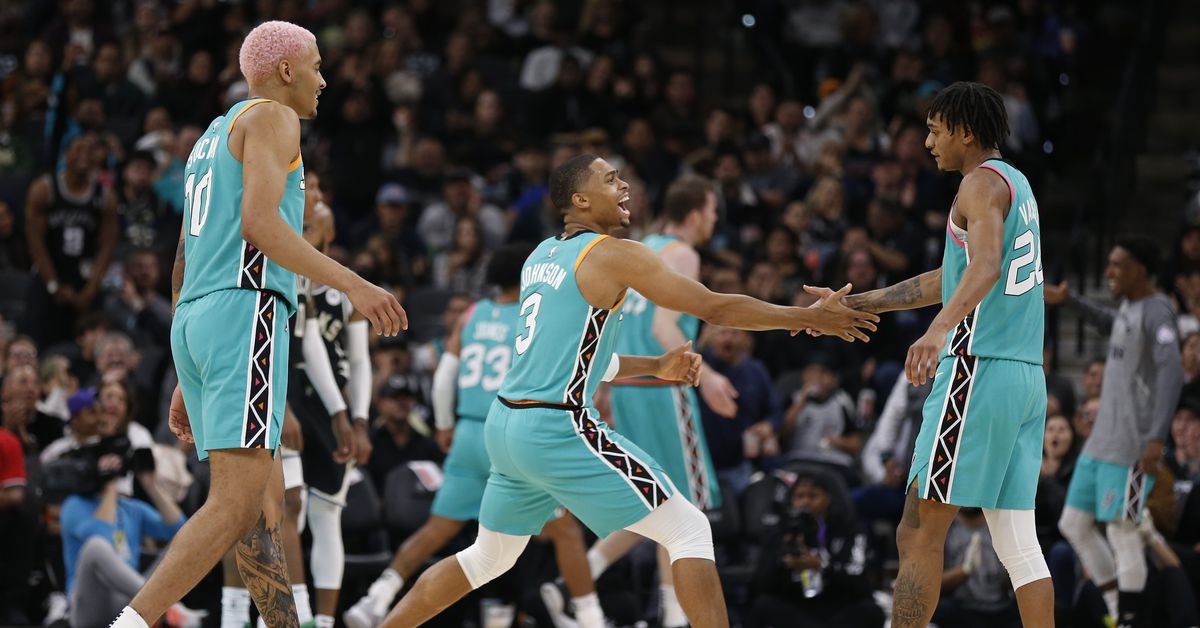 After a hot start to the season, the Spurs have come back to earth, losing eight of their last 10 games and sitting outside the play-in spots. Although there have been some injuries and a scandal that have complicated things in San Antonio, the standings seem to show that the Silver and Black were probably overachieving early,

Not everything is bad, though. There are moments in most games that show the Spurs have some good pieces and the right attitude, and even some stats that show they are probably on the right path in some regards. Let’s take a look at them.

The starting lineup has a positive net rating

The Spurs as a team have the second-worst net rating in the league after 16 games, ahead of only the Pistons. It makes sense when you consider that they have been on the wrong end of some serious blowouts and have the worst-rated defense in the entire NBA so far. What’s a little surprising is that their starting lineup has actually been good.

The Tre Jones, Devin Vassell, Keldon Johnson, Jeremy Sochan and Jakob Poeltl quintet has actually outscored opponents so far this season by 1.7 points. For comparison, that’s better than the 10-6 Utah Jazz starters and the eighth best among the 20 five-man units who have shared the court for at least 100 minutes. Only 13 teams have a better net rating for the season than the Spurs’ starters have had so far. San Antonio’s most-used lineup is not elite, but it’s pretty good and not at all responsible for the team’s struggles, which is great news because it features some of the players that the franchise intends to build around.

Whether Tre Jones is actually a starting-caliber point guard on a good team remains to be seen, and Jakob Poeltl might be moved before his contract expires or leave in unrestricted free agency next offseason, but knowing that Vassell, Johnson and Sochan can play major parts on a solid, highly used starting unit is a good sign.

Some core tenets of Spurs’ basketball are still alive and well

Over the past few decades, the Spurs establish an identity that revolved around some consistent features. Some of the more notable ones were ball movement, quick decision-making, and aversion to fouling. Those traits are still present in this young team that has had a lot of roster turnover, which is encouraging.

The Spurs so far allow the third-fewest amount of free throws per game, behind only Mike Bundeholzer’s Bucks and the Heat, and third in total personal fouls committed. They rank second in assists per game and assist percentage and are tied for fifth in most passes made per game and fourth in secondary assists. They rank sixth in both average time of possession per touch and average dribbles per touch, which shows they don’t pound the ball, and first in distance and average speed on offense, which shows everyone moves a lot and with purpose.

There are other areas that the Spurs typically excelled at, like avoiding turnovers, rebounding on their own end and generally playing competent defense in which this version of the team struggles, but most of those can be explained away by other factors. Expecting an extremely young team that is pushing the pace to not make mistakes is unreasonable. The perimeter defense being bad is concerning, but it helps explain why the defensive rebounding has been bad since big men have to contest and there are no great rebounding forwards on the roster to swoop in when the center commits. If the defense improves, the rebounding should follow.

This new iteration of the team will have to form its own identity but it’s good to see some of the core tenets that made the Spurs successful in the past still present. There’s still a lot of work to do, but at least part of the foundation seems in place.

The Spurs have two efficient 20+ point scorers under 23

Beyond already having a semblance of identity in place and a core lineup that can compete with anyone, the Spurs also have two versatile and prolific scorers. Both Keldon Johnson and Devin Vassell made a massive leap and have become reliable bucket-getters for an offense that doesn’t have many other self-creators.

Vassell in particular has shown tremendous progress when it comes to manufacturing his own shots, with under a third of them coming assisted compared to over two thirds last season. He has one of the deadliest mid-range jumpers in the league and is making over 40 percent of his three-pointers.

Johnson has not made the same type of jump as a creator for himself, but he has become a much better set-up man for others while remaining efficient on a higher usage, which has been a pleasant surprise. Johnson is still shooting the three and finishing at the rim at a high level but he has also almost doubled his assist percentage, becoming a more well-rounded offensive threat.

Both young wings still have areas to improve as well on offense, with finishing at the rim at the top of his priorities for Vassell and cutting down on turnovers up on Johnson’s list, but that’s actually a good thing since it signals they might still have another gear. It would be fun to watch them try to reach it, even in losses.