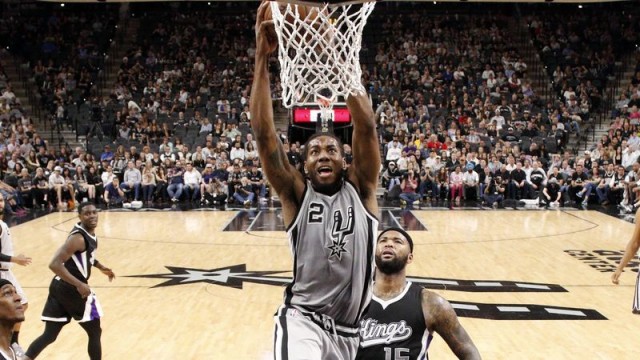 SAN ANTONIO (AP) — Manu Ginobili returned to give the short-handed San Antonio Spurs a needed boost as they remained perfect at home and extended the franchise’s best start.

Kawhi Leonard had 25 points and 13 rebounds and Ginobili added a season-high 22 points in his return from a gruesome injury, leading San Antonio to a 104-94 victory over the Sacramento Kings on Saturday night as the Spurs improved to 30-0 at home this season.

San Antonio won its eighth straight and extended its franchise-record start through 62 games to 53-9 despite the absence of starters LaMarcus Aldridge, Tim Duncan and Danny Green.

Ginobili played 15 minutes in his return from a 12-game absence, shooting 8-for-11 and showing no physical or psychological effects from testicle surgery on Feb. 5.

“What happened on the court was very unexpected,” Ginobili said. “When (Spurs coach Gregg Popovich) told me I was going to play a few minutes, I said, ‘Great.’ It’s OK if I don’t shoot, I just want to play, and then the game developed like that. It felt good.”…….Read More