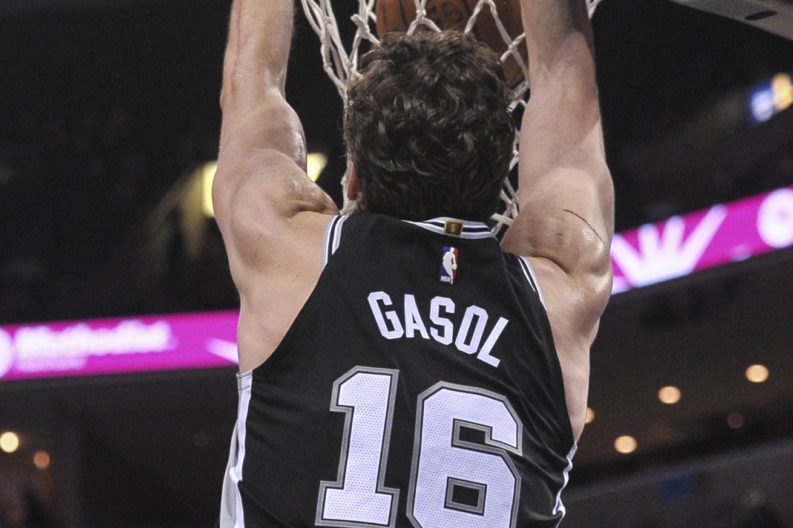 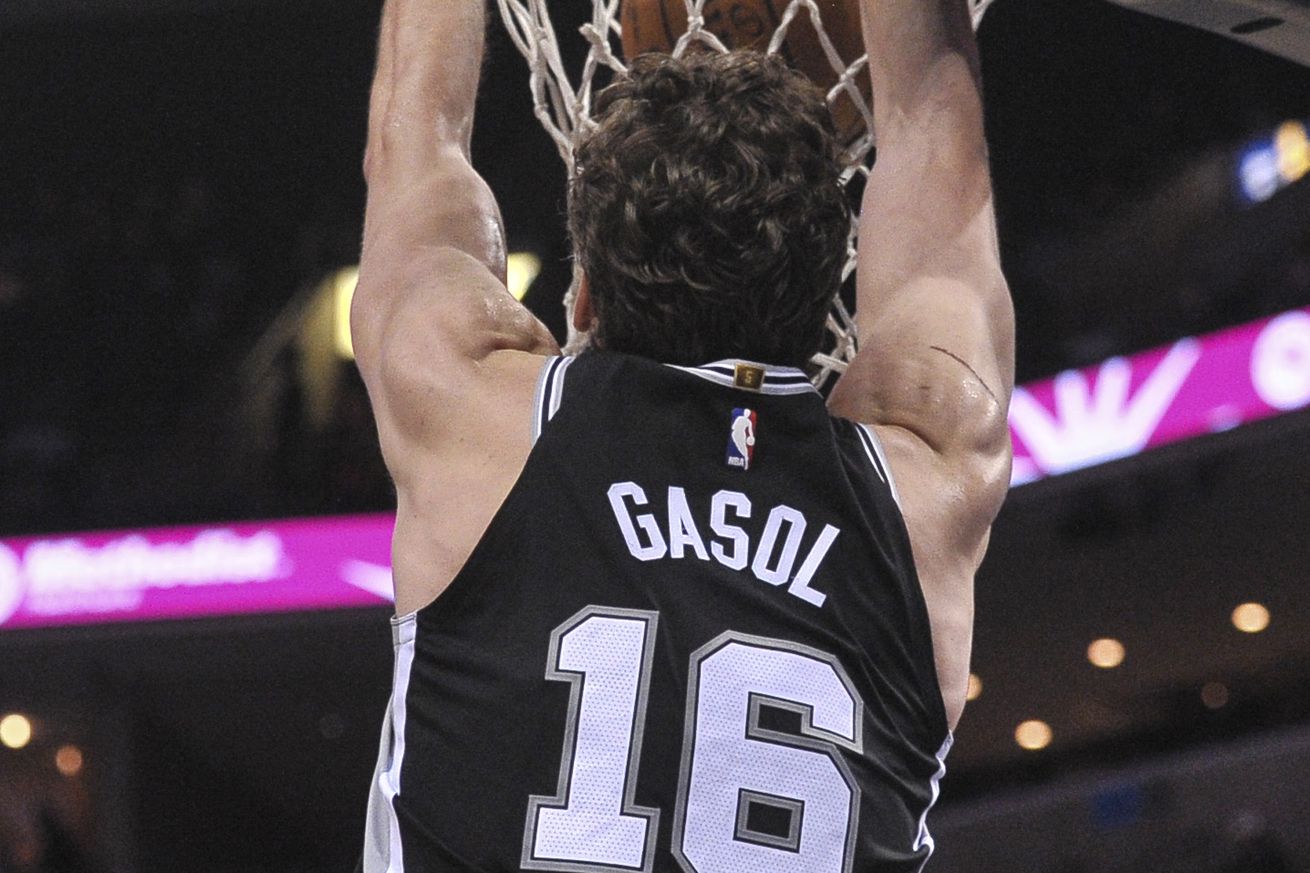 Pau Gasol returns from injury and shines against former team

In a war of attrition, the shorthanded Spurs more than handled their business against a shallow Memphis squad by playing smart basketball on both ends of the floor and easily winning the 3-point battle. After an inconsistent start to 2018, the Spurs will take any win they can get.

With Kawhi Leonard, Manu Ginobili, Rudy Gay, and LaMarcus Aldridge sitting out due to various ailments and injury management, on the second night of a back-to-back no less, the Spurs looked a little sluggish to start the game. The sputtering offense struggled, the Grizzlies turned the game into a slog early on with physical defense and ball pressure, and the Spurs found themselves in the familiar setting of a competitive game in Memphis.

However, 37-year-old near-triple-double machine Pau Gasol returned from a wrist injury to lead a Spurs team that has struggled on offense as of late, and his impact on the floor was immediately felt. Aside from bullying mismatches for buckets in the paint and defending his little brother Marc credibly all night, Pau picked the Grizzlies defense apart all night with nifty backdoor passes to cutters, flings from over his shoulder to players with deep post positioning, and perfect handoffs to shooters around the arc. The former Grizzly looked fresh and in complete control of whirring offense comprised of shooters and cutters, and seemed to relish his opportunity as the primary offensive cog all night.

Aside from Gasol, the Spurs also received promising performances from Davis Bertans and Dejounte Murray. Let’s first address the former.

Though he has drawn comparisons to former fan favorite Matt Bonner, Bertans only resembles the Red Rocket in hair color and ability to stretch the floor with shooting. Starting in his second-consecutive game, Bertans put his opportunity to good use by repeatedly showcasing his athleticism and playmaking off the dribble. He had two powerful dunks in the second half, including a one-handed flush after beating his defender from the 3-point line to the hoop, and looked for teammates dotting the perimeter while driving to the hoop. While Bonner eventually developed a nifty little floater in the paint late in his career, he never had the foot speed or ballhandling that Bertans has flashed.

Bertans was also an effective defender Wednesday night, protecting the rim without fouling and getting out to contest midrange jumpers and floaters from perimeter players. At 6-10, Bertans is not exactly undersized, but he is also not operating from a place of elite size or explosiveness. To make up for his deficiencies, he has defended the hoop by extending both arms straight up as he jumps straight up, as if he is a volleyball player defending the net, to mostly positive results.

For Dejounte Murray, his ability to read the defense in transition has completely transformed the way in which he impacts the game. After a fiery start to the season, Murray was benched and had to prove he could handle the ball without coughing it up constantly. He was a bit cavalier with passes around the perimeter, he often telegraphed his decisions in two-on-one situations, and he struggled to consistently hit shooters right in the mitts with his passes after dribble penetration. He looked like a player that had less than a full season under his belt and as a result, found himself getting yanked out of the game at times.

Since the rockiest stretch, Dejounte seems to have figured out how to feel the game more than think it, and he is making good on his promotion to the starting five. Against the Grizzlies, he turned a single-digit game into a double-digit lead in the second quarter after repeatedly attacking in transition and creating opportunities for teammates, and he seemed comfortable creating late in the shot clock on a couple different occasions. His care of the ball might be the difference between sitting on the bench and being in the game, and so far in his second stint as a starter, he has shown that he’s up for the larger role.

It has become ho-hum for the Spurs to transform unproven talents into competent role players, but it would be incorrect to suggest that the passing IQ in the frontcourt is simply a result of Pop’s system. With Pau, Joffrey Lauvergne, Bertans, and Kyle Anderson manning the power forward and center positions Wednesday night, the offense made up for a lack in perimeter shot creation through precise passing from the elbows and the arc, and put pressure on a battered Memphis defense to defend multiple actions for 24 seconds at a time. Slick-passing big men have been and will continue to be a consistent part of the Spurs’ success this season.

On the second night of a back-to-back, Tony Parker looked closer to game shape than he has perhaps all season, which should encourage Spurs fans. Even against bigger, longer Memphis defenders, Parker patiently worked his way into his sweet spot of teardrops and pullup jumpers, and found cracks in the defense to attack. He once again provided a spark off the bench on offense, and looks comfortable finding his rhythm with the second unit.

After stringing together consecutive wins for the first time in 2018, the Spurs seem to be on the upswing. Despite being short a few players, they got almost any look they wanted against a proud Memphis defense, and finally have some momentum to build on before their upcoming annual rodeo road trip. Hopefully that injured list will begin to shrink.

-The play of the game could have been a few things, but my pick is the Tony Parker-to-Pau Gasol alley-oop at the 11:35 mark of the fourth quarter.

-Moving forward, Bertans has to play. I don’t know the rotation tweaks once everyone is healthy, but Bertans has earned minutes. Same for Bryn Forbes.

–Patty Mills seems to benefit from playing off the ball with Tony in the second unit. He is now free to run and run some more until he finds opens 3s.

–Danny Green quietly put together an effective 14-8-3-2 game and looked unaffected by that nagging groin injury.

-Poor Marc Gasol. That Memphis squad is a bit ragged at this point—can we get Marc to a contender while he is still in his prime? Preferably a team in the East.