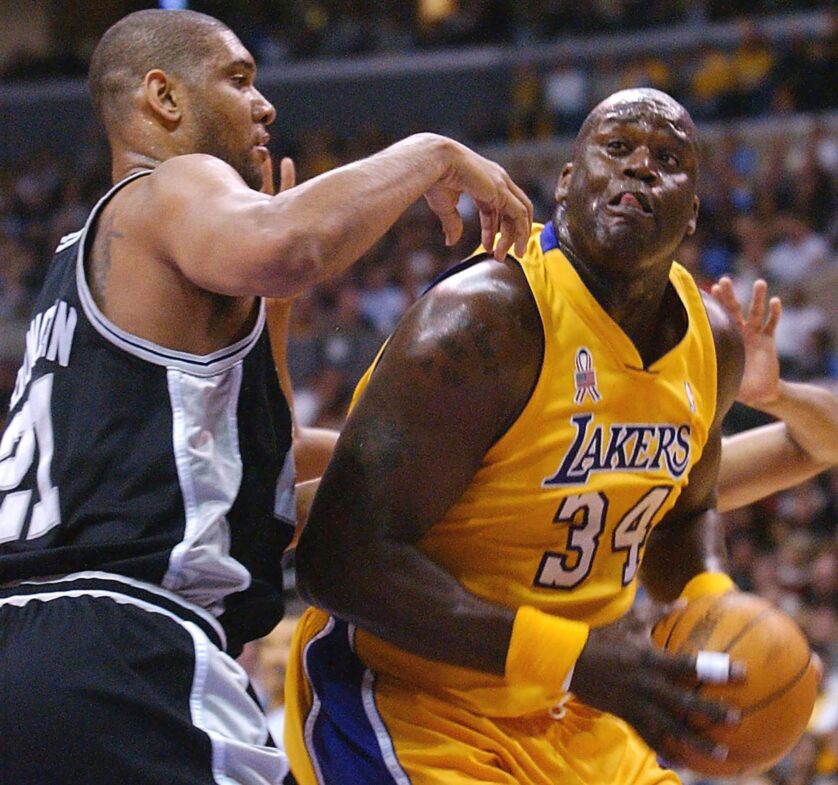 The fierce rivalry between the Los Angeles Lakers and the San Antonio Spurs is well-documented. From 1999 to 2014, the two franchises combined for ten championships, with each prevailing five times on the biggest stage. However, despite the storied friction, former Laker and Hall of Famer Shaquille O’Neal expressed admiration for their main nemesis in his latest All the Smoke interview with Matt Barnes and Stephen Jackson.

In the interview, Shaq dished on how he and Kobe Bryant could have soared to even greater heights before ego got in the way and muddled things up. He admitted that things going downhill may have been his fault but still expressed delight about how they won three out of four in their stretch from 2000-2004 despite adversity, with a three-peat highlighting their legendary run.

With the off-court issues between him and Kobe leading to perceived underachievement, Shaq expressed admiration for how their rival Spurs operated. Asking Jackson if they ever had an altercation in the team, Jackson answered no. O’Neal then remarked that the San Antonio Spurs may be the only NBA dynasty to never be entangled with the off-court problems.

“That’s probably the first time I’m hearing about a dynasty that never had no problems. All the other dynasties had problems,” said O’Neal.

Barnes then asked him about how many championships the Shaq-Kobe Lakers could have had if egos did not get in the way. The Diesel confidently answered “seven”, pointing out that what led to his eventual exit from Los Angeles in 2004 were contract disputes and not the notorious feud between him and Bryant.

Jackson then noted that Kobe even went as far as saying they would’ve won “close to ten” championships if it were not for the San Antonio Spurs. Shaq agreed. He then continued to lament how he could have handled things better since he would have wanted to spend his entire career with the Lakers, but his ego prompted him to walk out of town after the organization failed to meet his justifiably lofty demands.

Praise of the Spurs is new for Shaquille O’Neal

Shaquille O’Neal’s explicit appreciation for the San Antonio Spurs is quite a pleasant surprise for fans of the Silver and Black, especially with his history of downplaying the achievements of the organization.

He notably once said that the Spurs only have four championships, heckling at how the 1999 title has an asterisk given the lockout-shortened season That year, his Lakers were swept by Tim Duncan and David Robinson’s squad en route to the franchise’s first NBA title.

Given all the smoke (no pun intended), it is nice and fresh for a longtime Spurs adversary like Shaq to appreciate how San Antonio admirably operated in a league that has been littered with drama hounding basketball royalties, like what he experienced first-hand with the Los Angeles Lakers.

That being said, watch above as Shaq has a heartfelt and entertaining exchange with Matt Barnes and former Spur Stephen Jackson. In it, he tackles his disgruntling year in 2020, his relationship with the late Bryant, his college run and early years with Orlando, his short but eventful stint in Miami with Dwyane Wade, his transitioning to media, his favorites in today’s NBA, and more.