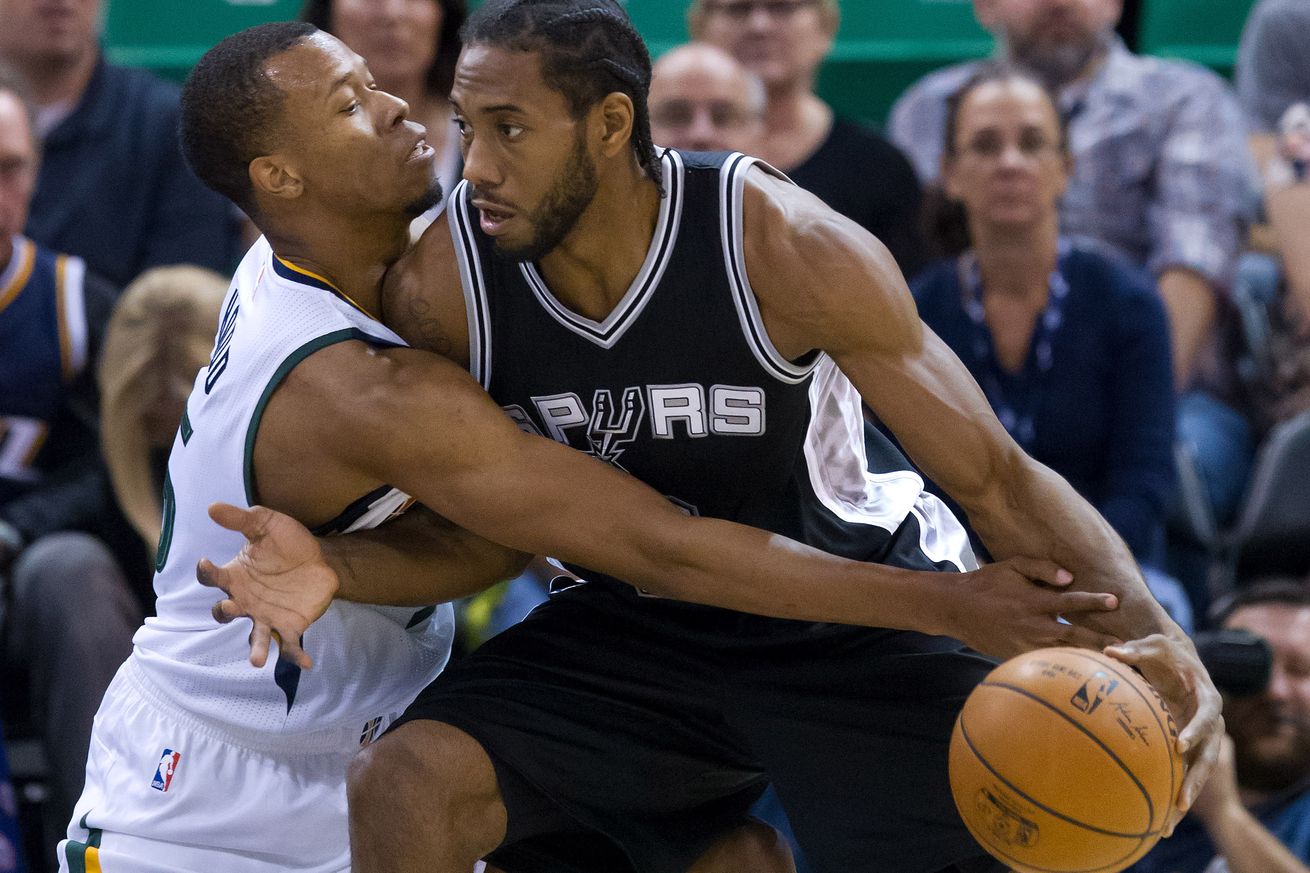 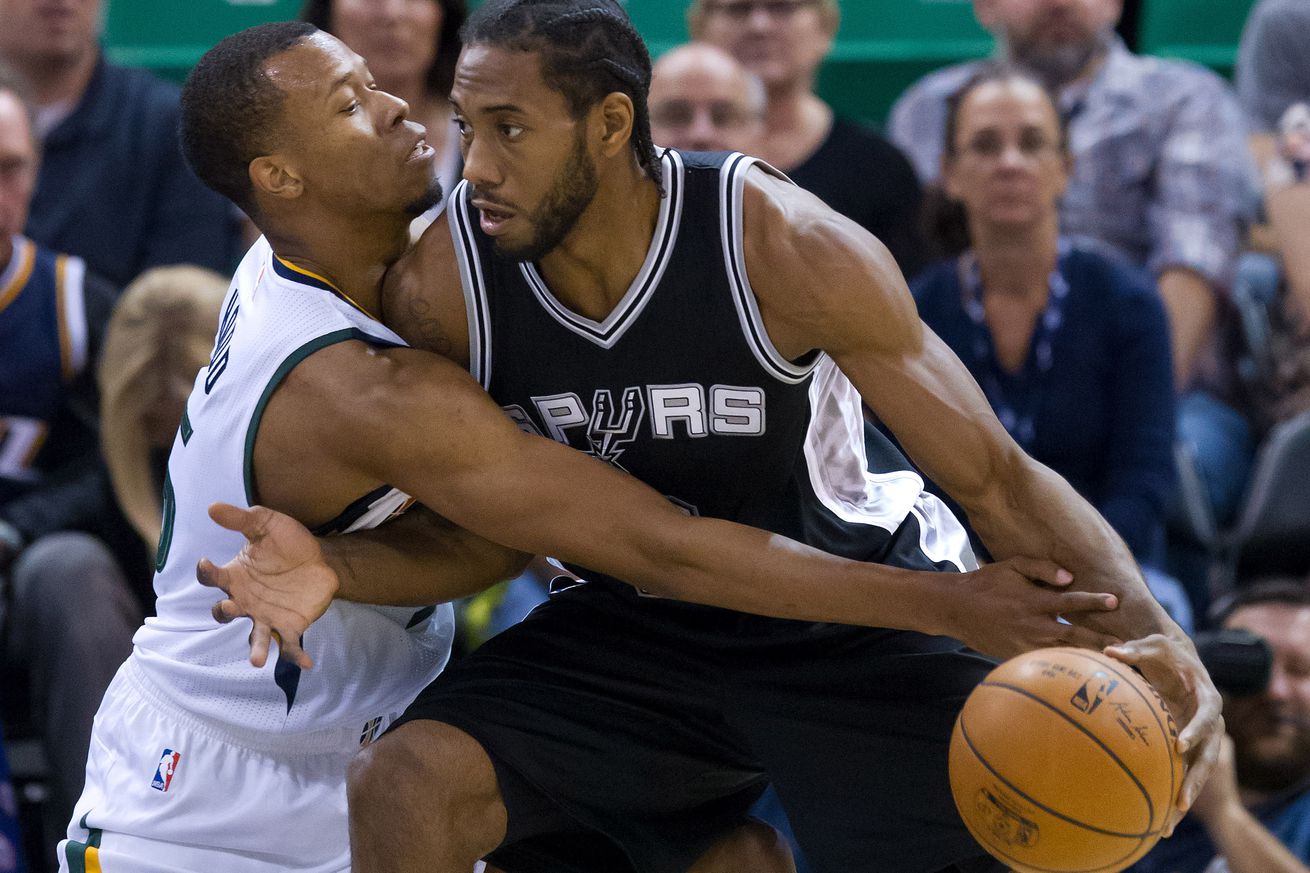 Great performances from Parker, Simmons, Leonard and Gasol help the short-handed Spurs eke out a win.

Sunday afternoon, Coach Pop opted to sit Manu Ginobili, LaMarcus Aldridge, Danny Green, Patty Mills and David Lee. This was a practical decision for the Spurs as they are effectively locked in for the two seed. It was also a welcome sign for Utah, who looked to maintain their two game lead over the Clippers for the four seed.

It was Boris Diaw’s first game in San Antonio as a member of the Jazz, and he started off aggressively with two buckets and an offensive rebound.

The Spurs countered Diaw’s play with some sharp performances of their own, particularly Tony Parker, who kicked off the game with an and-1 layup and a jumper. Dewayne Dedmon contributed some great rim protection, including a fantastic rejection on a monstrous Gobert dunk attempt.

That block represented one of the few stops in the quarter. In a battle between two defensive titans, neither team could miss. Hot shooting from Davis Bertans, Bryn Forbes and Pau Gasol was met with much of the same from Joe Johnson, Rudy Gobert and Gordon Hayward. Utah hit 55% of their shots, which was actually dwarfed by San Antonio’s 65%.

Parker’s solid play continued in the second quarter. He started off the quarter by breaking down the defense and finding Pau with a nifty pass for a wide-open dunk. Parker followed with a pull-up jumper and a few assists to help build an early 17 point lead.

But if the last two games have taught us anything, it’s that big, early leads can disappear fast. Hayward and Dante Exum limited guard penetration and Gobert shut down the paint. With the amped-up defense and some efficient pick-and-roll offense, Utah was back in the game. A devastating Exum dunk and Ingles three helped build a 21-4 run to even the game at 50 near the end of the half.

After scoring 46 points by the eight minute mark of the second quarter, San Antonio could only muster eight points the rest of the quarter. They led 54-52 at intermission.

As you may have noticed, Kawhi’s shooting percentages have plummeted over the last few months. Since the All-Star Break, Leonard has knocked down 28% of his threes. This is a concerning trend that has been a recurring incident the past few seasons. It looked like this poor shooting was going to continue today after the first half, where Kawhi managed six points on 2-of-7 shooting.

The second half was very much a different story. With dunks, layups and jumpers, Leonard put up eight points to start the third to help build a 10 point lead. The gap would have been larger if not for some more great play from Diaw, who chipped in a quick eight points of his own that eventually prompted a Spurs’ timeout.

The scoring battle between the former teammates continued after the TO. Kawhi hit a three and Diaw followed with an open layup. While Boris slowed down after this shot, Leonard kept going and finished with 19 points in the quarter. This helped the Spurs extend the lead to 10 after three, 88-78.

The final period started off with the teams trading buckets. The Spurs couldn’t contain the pick-and-roll and had a tough time slowing the high-low action between Diaw and Gobert. On the other end, Simmons and Gasol hit several key shots to maintain a safe double-digit gap.

Tony also kept up his great play. He put the cherry on top of his game by avoiding a double team, blowing past Exum and knocking down a contested tear drop. This was arguably his finest game of the season.

However, Utah is a tough team and they weren’t going to go away easily in a game with such great implications for their playoff seeding. At around the five minute mark, the Jazz re-amped their defense by causing a pair of turnovers and inducing several missed shots.

A long-two fadeaway jumper from Joe Johnson helped cap a 12-4 run to cut the deficit to four with 2:24 left. Gasol found Simmons on the ensuing possession for a slick alley-oop to push the lead back up to six, and the game was mostly smooth sailing from there in a 109-103 victory.

Even though the Jazz were without Derrick Favors, Alec Burks and George Hill, this was an impressive win for a Spurs team missing five key rotation players. San Antonio eked out a 3-1 record this week despite a hellish quartet of opponents. The schedule doesn’t get much easier on Tuesday in a potential first-round battle with the Grizzlies.