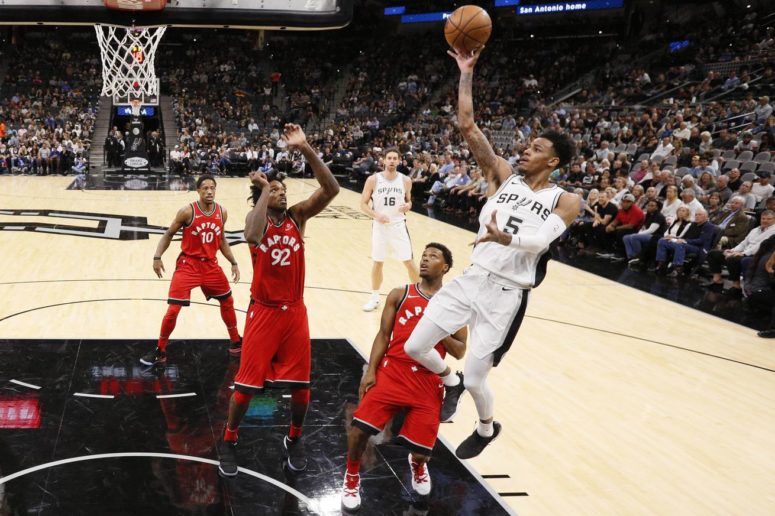 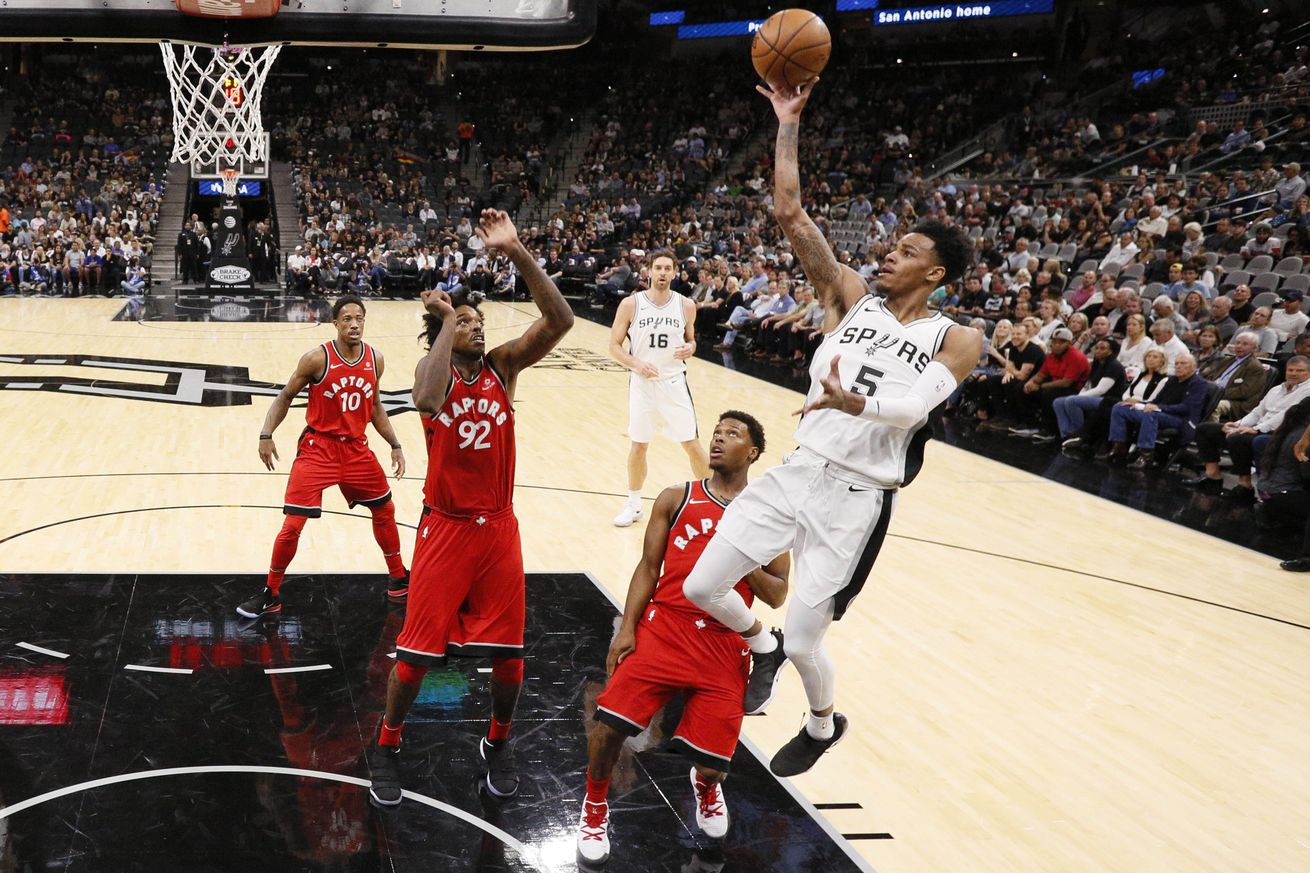 Dejounte Murray gets his firat career double-double and holds Lowry to a sub-par game in a win over the Raps.

The game began with sloppy passing by the Spurs, shown by a toss out of bounds by Murray after a really nice block by Anderson on a Lowry three. That was the Spurs’ 4thearly TO, and they ended the first quarter with 6. Anderson had a second block after Toronto went on a bit of a run to take a 12-9 lead. Danny showed off his improved off-the-dribble game with a reverse lay in and-1. The Spurs got the lead back after Lauvergne made a strong move off his own miss, along with yet another 3 by Manu. The Spurs ended the sloppy and defensive quarter down 23-21.

Rudy Gay lit a fire with his first three as a Spur to tie it up at 27, and then Old Man Manu had a beautiful drive and lay in, followed by taking the charge on the other end. Patty gave the lead back on a long two, and then a nice pass from Pau to a wide up Rudy Gay under the basketfor the dunk. Toronto called time at 35-30 and then turned it over off a foul on the inbounds pass. San Antonio slowed down the TOs in the second, with their first of the quarter not coming till almost 5 minutes in, but still ended the first half with 12. After the Raptors regained the lead after a 6-0 run, the Spurs then went on a run of their own, including a big three and then a block on 7-footer Jakob Poeltl by Danny Green. The last minute of the half just saw mad scrambles until a steal by Norman Powell almost gave the Raptors the lead at the half, but he didn’t get it off in time, and we went into halftime 50-50.

After a fourth block by Danny Green (he ended with 5 on the night), Dejounte Murray opened up the scoring in the second half on a hard drive to the paint, but then Kyle Lowrey answered with a 3. Demar Derozan posterizedAldridge, and Murray answered by luring Ibaka into his second goaltending call of the game. After Pau dropped the ball off for a second Danny three, Murray hit a beautiful floater, leading the Raptors to call time. The standard Spurs ball movement was encapsulated with Aldridge posting up, Lauvergne driving and getting the wide-open dunk of the great feed by Aldridge. At the end of the 3rd, the Spurs were out-rebounding the Raptors 47-22, but also had 18 turnovers to the Raptors’ 8, negating much meaning for the board advantage. The Spurs still led after 3 though, 75-74.

Toronto built up an 81-75 lead after a clear path foul by Patty Mills, and then a 3 by CJ Miles. After Pop called time, the Spurs went on a quick run, and Aldridge tied it up on a fadaway, and then took the lead on a pick-and-pop from the line. Danny Green gave the Spurs a three pointlead after the fake, dribble, and shot which again proves how good he’s gotten off the dribble. After Danny drove into the paint, spun, and dropped in the floater, Toronto called the timeout, and Ibaka and Aldridge started a shoving match which got the crowd way into the game, but luckily didn’t warrant any techs-just some good hard ball. With less than 2 minutes left, Aldridge got the ball on the elbow and spun around Ibaka for the and-1 and Ibaka’s 6thfoul, knocking him out of the game. More importantly, it gave the Spurs a 10 point lead, the biggest of the game for either team, with 1:48 left in the game. DejounteMurray iced the game with two free throws to give the Spurs a 99-91 lead with 20.9 seconds left, and to give him 14 points to go along with his career-high 15 boards. The Spurs only had 2 turnovers in the fourth quarter to put away the Raptors, but still ended with 20 on the night. Aldridge had 20 on the night, but for my money the player of the game is Dejounte Murray, who had 16 points and 15 boards, and disrupted the Raptors all night with his length.

The Spurs are in Miami Wednesday, see you then!