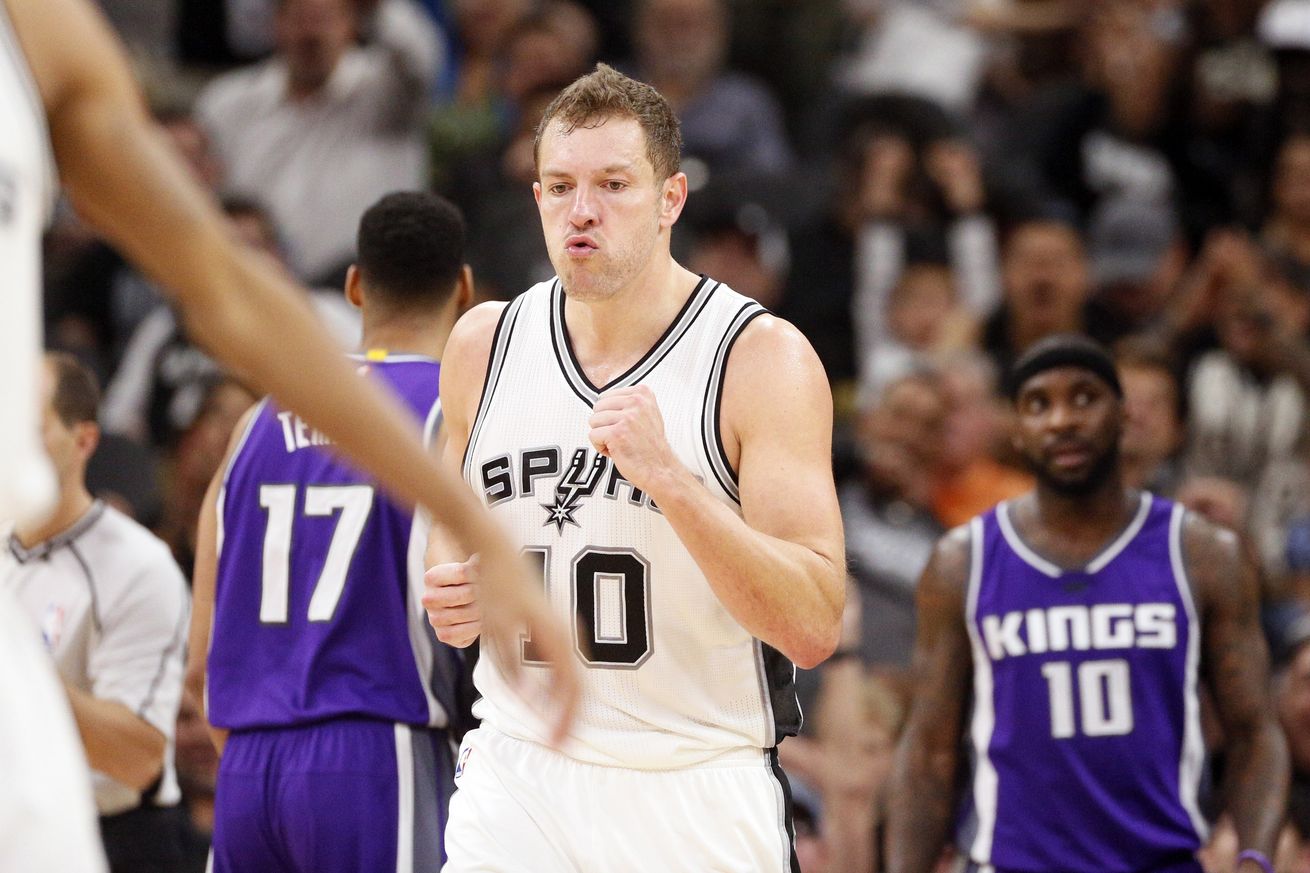 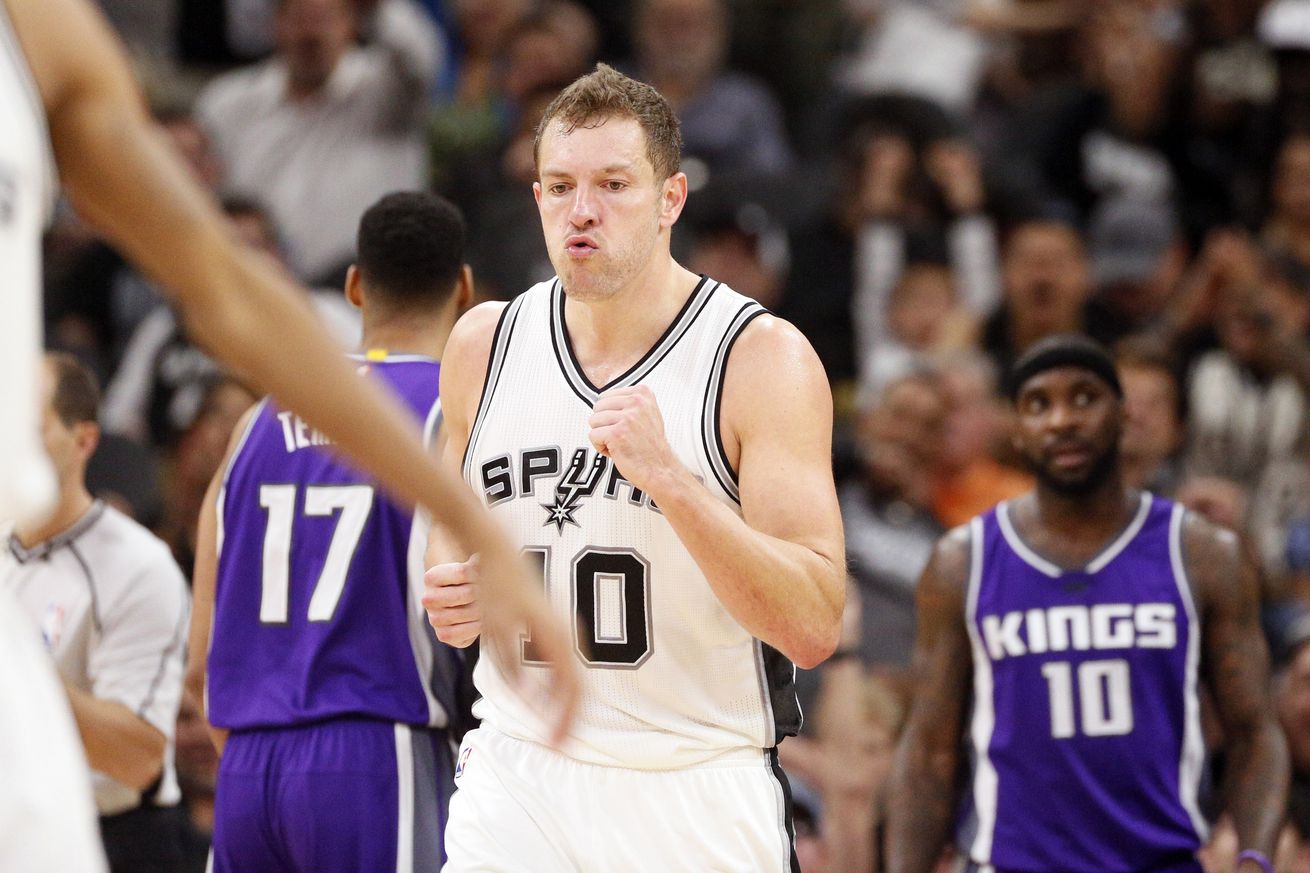 Without Leonard and Aldridge, the Spurs overcame a 28 point deficit to win their ninth in a row.

After playing 37 to 43 minutes in each of the last thee games, LaMarcus Aldridge and Kawhi Leonard got the night off, with David Lee and Jonathon Simmons starting in their places. It was a tale of two halves as everything went right for the Kings in the first half and vice versa for the Spurs in the second. After falling behind by as many 28 in the first half, the Spurs found their resolve and chipped all the way back for the largest comeback in the NBA this season and their largest in the Gregg Popovich era.

The Kings scored the first 7 points of the game, and Pop called his first timeout less than three minutes in with the Spurs already in an 11-4 hole. Tyreke Evans got hot from three, and the Spurs were once again down big, 24-8 with 5:44 left, in the first quarter. The bench wasn’t much better, and Manu Ginobili picked rare a rare technical after arguing a no-call with the Spurs down 31-15. The Kings continued to soar while the Spurs faltered with horrible defense and an inability to put the ball through the hoop. By the time the first quarter mercifully came to an end, the Spurs were down 37-15 and shooting just 27% (6-23).

The Kings stretched lead as far as 25 to open the second quarter. Simmons finally took and made an open three to cut the deficit to 20, 49-29, with 7:11 left, but Kings took it right back to 25 at the midway point. The Spurs couldn’t catch a break on anything, the best example being a jump ball that the Spurs initially won but had to be redone because the clock didn’t start, and this time the Kings won it and got a three-pointer from Buddy Hield, which stretched the lead to it’s largest margin at 59-31. The effort finally picked up in the final minutes of the half, and the Spurs went on a 17-4 run, capped by a three by Kyle Anderson, to miraculously only be down 63-48 at intermission.

The Spurs started the third quarter attacking the paint with much more determination and defending better, gradually chipping into the Kings lead. Even though Evans remained hot, the Spurs had multiple opportunities to cut the lead to single digits but couldn’t quite get over the hump before a Kings timeout with 5:13 left. A Patty Mills three with just over 3 minutes left finally got the Spurs within single digits for the first time since the score was 15-6, and a Ginobili three cut the deficit to two, 80-78. Pau Gasol tied things up with 37 sec left, but a Skal Labissiere jumper at the buzzer got the Kings an 86-82 lead heading into the final frame.

The Kings got the lead back to six before David Lee scored six straight points to tie things back up. After the Spurs blew a number of chances to take their first lead of the game, Pop called timeout to regain control with the game tied 92-92 with 6:43 left. The Spurs came back and finally got that lead off a Mills three. A four-point play by the Aussie gave the Spurs what felt like a huge 99-94 lead with 3:36 left. Danny Green hit two straight threes to extend the lead to eight with 1:28 left, and the Spurs won their ninth game in a row, 114-104.

Lee and Mills each posted double-doubles, Ginobili scored a season high 19, and Simmons and Green chipped in 14 apiece.

Check back later for more on this one. The Spurs will be in OKC tomorrow for nationally televised 7pm tip-off against the Thunder.