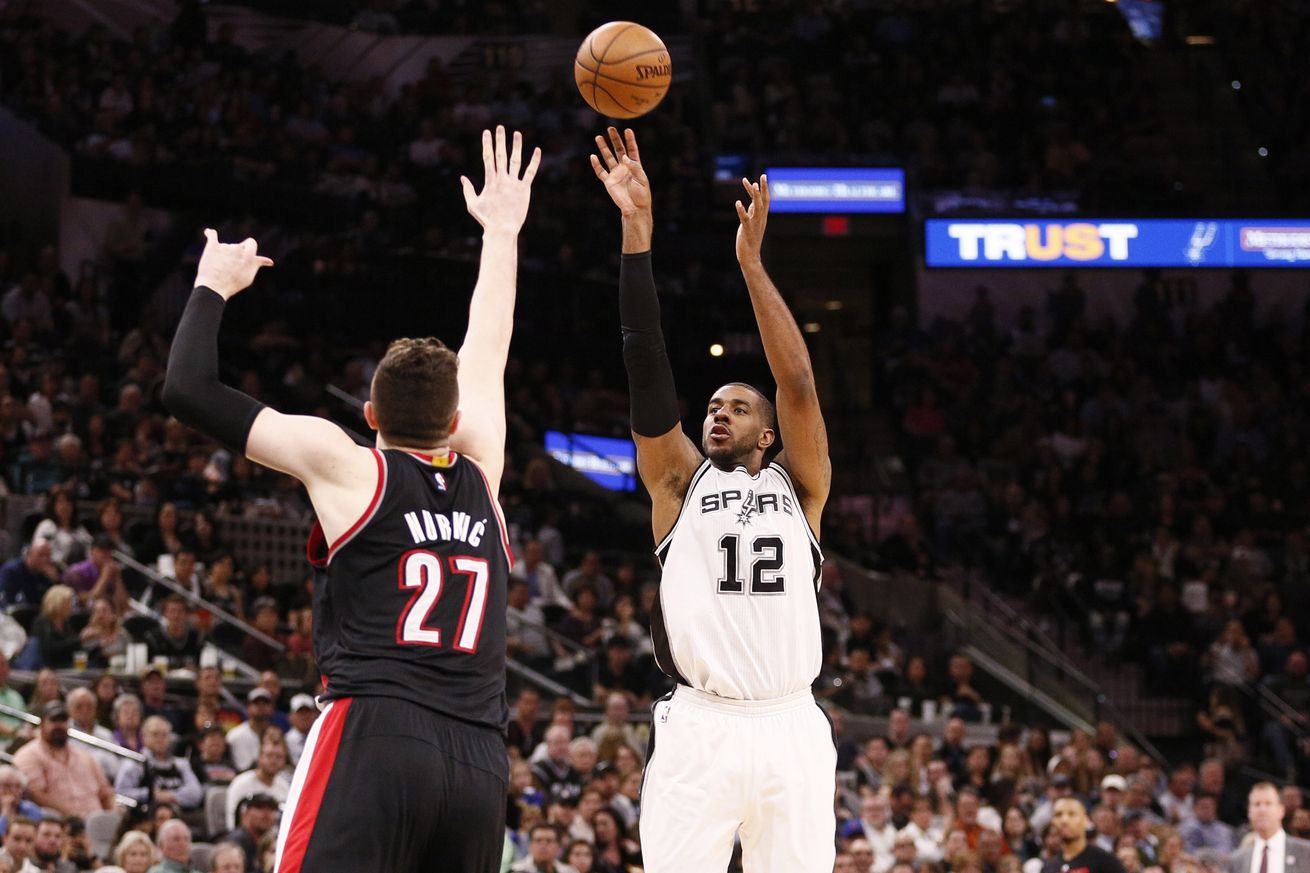 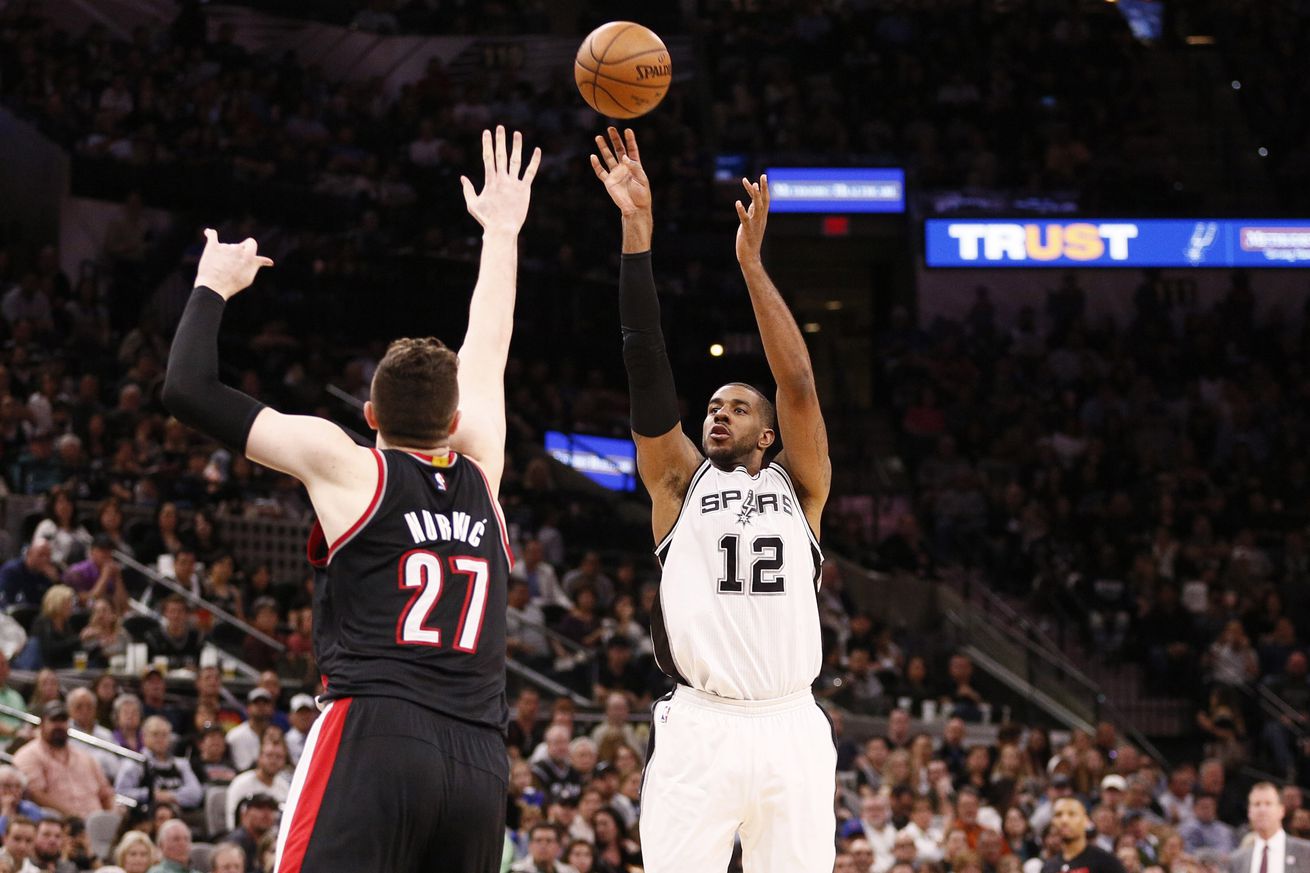 The Spurs started the day with a pleasant bit of news with the return of LaMarcus Aldridge from his recent heart scare, but that would be it. Tony Parker and Dejounte Murray remained out, and the Spurs looked lethargic on both ends, failing to take advantage of a tired Portland team on a SEGABABA. The loss moves the Warriors back to first place by a game.

Aldridge made his return…coincidentally against his old team…known right away with a smooth jumper on the first possession. Dewayne Dedmon woke up from a recent slump with two alley-oops, and Terry Stotts called his first timeout with the Spurs up 14-7 after just four minutes. The Blazers responded with an 11-2 run on the back of nine of points from Damian Lillard, leading to Pop’s first timeout with 4:52 left in the quarter and the Spurs down 16-18. Pau Gasol came in off the bench and did what he’s been doing lately, scoring 9 points in all forms to give the Spurs a 29-28 lead at the end of the first quarter.

The bench started the quarter well but got a little careless after pulling ahead by as much as six multiple times. Portland hung in there and took advantage of these lapses, tying things back up at 38 apiece midway through the quarter. Kawhi Leonard went into MVP mode from there, scoring 11 points down the stretch. The Spurs built a seven point lead with two minutes left, but once again the Blazers had an answer, cutting the Spurs lead to just 55-54 at the half. The Spurs shot 53.7% and dominated the boards but also committed ten turnovers and allowed the Blazers to shoot 50%.

Pop didn’t like his team’s execution and called timeout one minute into the third quarter. The teams traded buckets and the lead for a while, including back-two-back dunks from Leonard: one a high flying dunk from outside the restricted area, followed by a 180-degree reverse dunk over Jusuf Nurkic. A couple of jumpers and a breakaway dunk for Leonard stretched the Spurs lead back to 71-66 with five minutes left in the quarter. Lillard once again took over, scoring 16 points, scrambling the Spurs’ defense, and getting to the line at will. The Spurs couldn’t do anything right down the stretch and were fortunate to only be down 80-82 heading into the final frame.

Manu Ginobili hit a three off a pump fake to start the fourth quarter, and another three by Leonard put the Spurs back in front. The teams continued to trade haymakers before Portland got it’s largest lead at 96-91, leading to a Pop timeout with 6:39 left. The Blazers got the lead to seven a few times, including inside the final two minutes as the Spurs continued with poor ball movement, shot selection, and lackadaisical defense.

However, a few Portland mistakes opened the door, and the Spurs got within two with 0:53 left thanks to five straight points by Aldridge. Leonard missed a chance to tie things up, and Portland got the offensive rebound off their own miss with 0:19 left. The refs missed an intentional Spurs foul on Nurkic, who had just missed two free throws, before a timeout, and McCollum made both free throws to make it a 105-101 game with 0:15 left. Mills hit a three to cut the lead to one, and after the Blazers made their freebies, Nurkic fouled Ginobili, sending him to the line and preventing a chance to tie things up with a three with two sec left. Unfortunately, Manu missed his first and made his second free throw, ruining the opportunity for a quick rebound and putback to tie the game, and Portland won 110-106.

Beware of The Klaw. pic.twitter.com/cWkMcDk4jm

Check back later for more on this one. The Spurs return to action on Saturday for an 8 pm tip-off in Memphis.