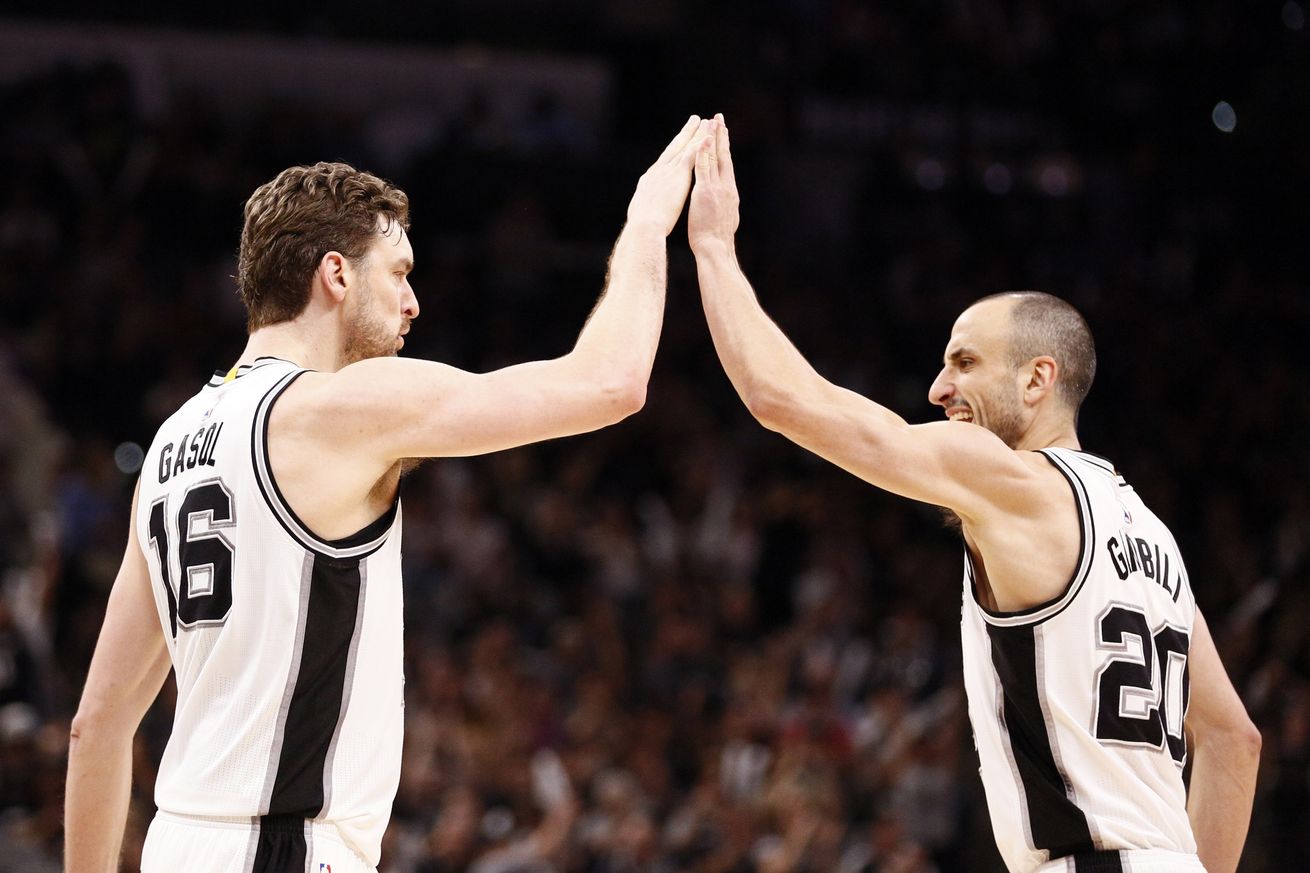 The bench showed up, and the Spurs rediscovered their mojo on the way to an emphatic victory.

The Spurs came back home in desperate need of a win after losing Games 3 and 4 in Memphis, and they responded in emphatic fashion. It was much more of a team effort with five players scoring in double digits, led by 28 from Kawhi Leonard, and the defense was better (if not great) as the Spurs held everyone beyond Mike Conley relatively in check on the way to another convincing win at home.

Most importantly, while it wasn’t one of his epic Game 5’s, Manu Ginobili finally found his groove and gave his team the shot in the arm they so desperately needed. Memphis fought hard all game, but the Spurs with more than just two or three players showing up was just too much.

James Ennis scored Memphis’ first five points as Leonard helped off of him to double-team, and the Spurs looked timid out of the gate as they fell into an early 10-4 hole. Manu Ginobili came in and finally hit his first shots of the series: an and-one layup followed by a three-pointer, and predictably the energy immediately picked up. His eight points in the quarter were part of a 15-5 run to get the Spurs their first lead before a string of free throws helped the Grizzlies recover and tie things back up at 23 to end the first quarter.

Jonathon Simmons got some early run and started the second quarter with a floater, followed by threes from Patty Mills and Tony Parker, but the Grizzlies continued to make their living at the free throw line and off of Spurs mistakes to keep things close. A Zach Randolph lay-up got the Grizzlies back within one, 38-37, after the Spurs had led by as much as six, leading to a Pop timeout just past the midway mark. Leonard, Danny Green, and Pau Gasol responded with consecutive threes, and the Spurs gradually built the lead as high as eight. Memphis did just enough to keep the Spurs from pulling away any more, and the half ended with the Spurs up 55-49.

Parker started the quarter with a driving lay-up and jumper for the Spurs first double-digit lead of the game, leading to an immediate timeout for Memphis. Conley had the Grizzlies first five points of the quarter, and again they were able to stay just close enough despite the Spurs seemingly getting anything on offense. Pop called a timeout with 5:45 left after a turnover allowed Memphis to get back within single-digits at 69-61. The Spurs responded with a Leonard three and three-point plays for Gasol and Mills, and the Spurs went on a 15-5 run to get the lead to 18. Conley continued to be Memphis’ only hope and scored seven points in the final minute to cut the lead back down to eleven, and the score was 87-76 heading into the final frame.

The Grizzlies scored the first seven points of the fourth quarter to cap a 22-3 run and get within four before an-one dunk by David Lee stopped the bleeding. JaMychal Green had himself a quarter with eight early points, Mills had two threes, and both teams traded blow after blow on offense before Memphis called a timeout with the Spurs up 102-95 and 5:20 left to play. The Spurs responded with a 13-2 run, six of which came from Mills for 12 points in the quarter a playoff career high of 20 points, and finally the Grizzlies were out of answers (or at least time). The Spurs emptied their bench with just over two minutes left and went on to win 116-103.

Check back later for more on this one. The Spurs haven taken a 3-2 lead inn the series and head back to Memphis hoping to close things out in Game 6 on Thursday at 8:30 CT.