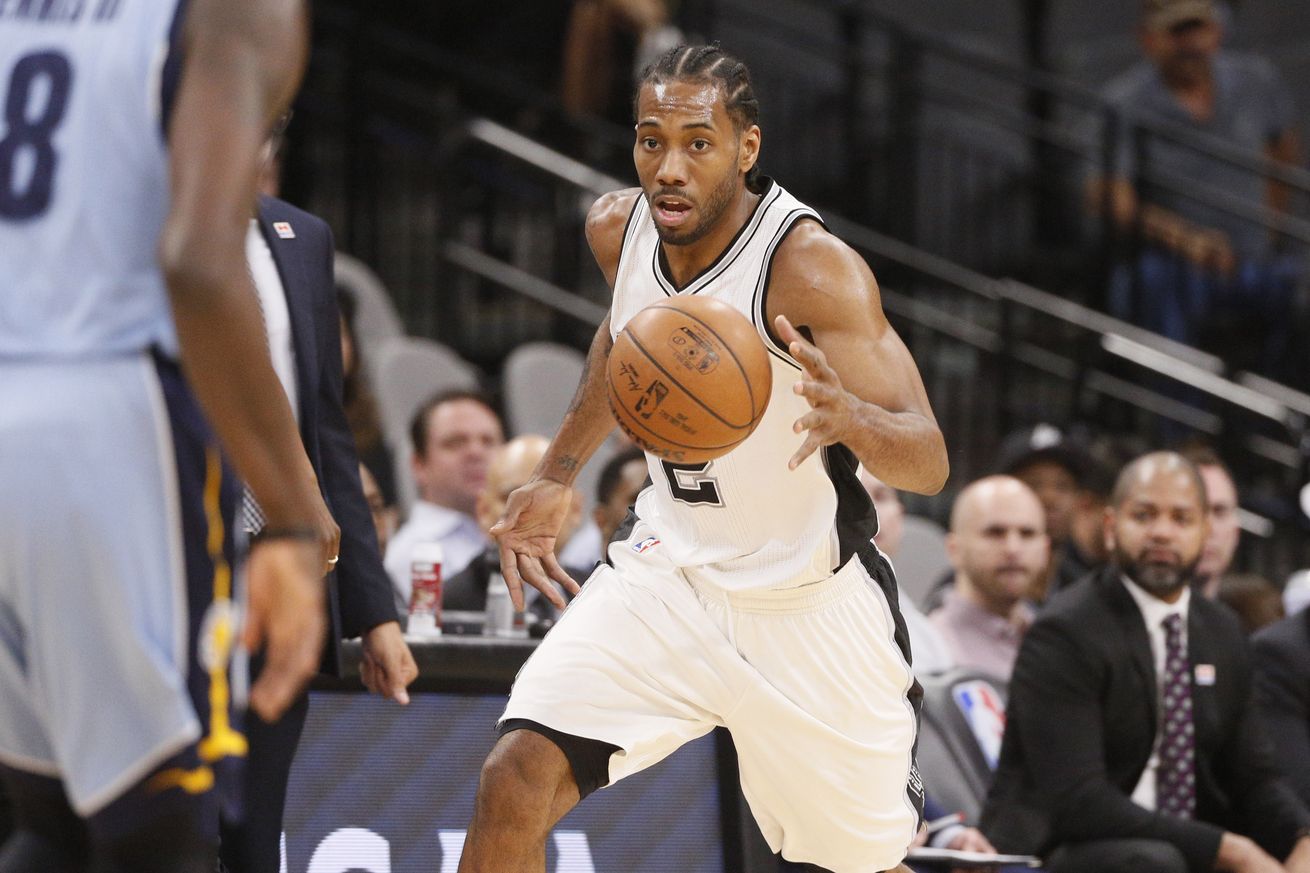 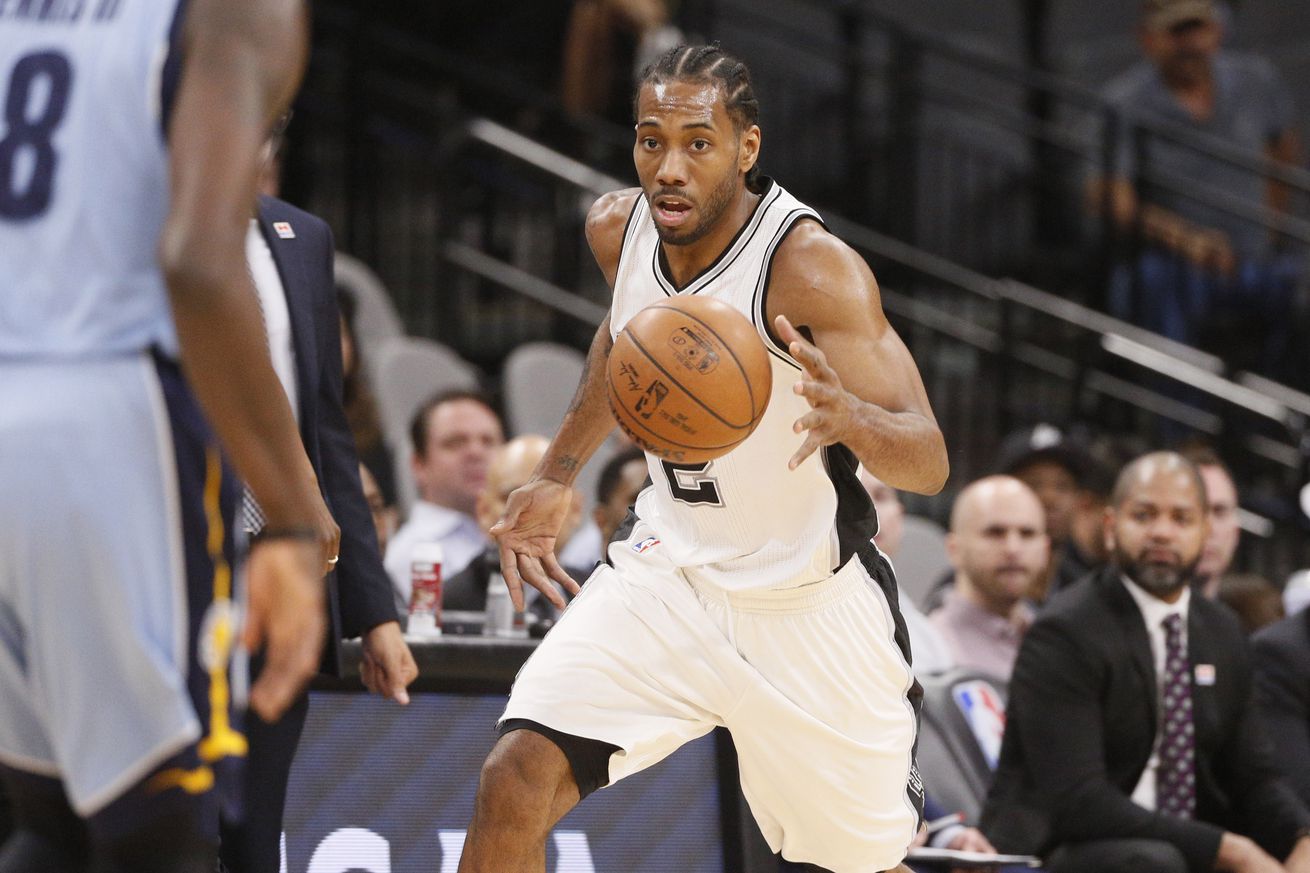 The Spurs won a close game in overtime against their likely first round playoff opponent, the Memphis Grizzlies, because their best player Kawhi Leonard made the plays when they were needed.

The Spurs played an entertaining game tonight against their likely first round playoff opponent, the Memphis Grizzlies, as the contest went to an overtime period where Kawhi Leonard made the key plays to seal the 60th win of the season for the Silver and Black. There were a few scary moments as key players hit the floor, but nothing appeared serious for the long term prospects of the Spurs.

The teams started off trading baskets between James Ennis III and Dewayne Dedmon, but then the Spurs went on an 8-0 run led by Tony Parker and Kawhi Leonard. After another exchange of baskets, the Grizzlies, led by Mike Conley, went on an 8-0 run of their own to tie the score at 14 each. Then both teams went extremely cold, with the only score a Zach Randolph putback under the basket. After one quarter, the Grizzlies led 16-14.

The Spurs scoring drought continued for the first two and half minutes of the second quarter until Jonathon Simmons finally scored on a two on one fast break with a nice behind the back assist from Tony Parker. But the worst news was Manu Ginobili taking a knee to the thigh from Troy Daniels, which hopefully only caused a bruise. If this turns into a lingering issue, it’s just the sort of thing that you didn’t want to come out of a game that means nothing to the Spurs’ playoff run.

About four minutes into the second quarter, the Spurs were still stuck on 16 points, on pace for a blistering 48 points for the game. But LaMarcus Aldridge brought the Spurs back by hitting mid-range shots. Tony Parker was able to get all the way to the basket for layups on a couple of occasions, but both teams struggled to score. If not for a couple of steals and fast break baskets from Kawhi Leonard, the Spurs might have been held scoreless for most of the quarter. At the half, the Grizzlies led 35-33, as both teams scored 19 points. That sounds bad, but it was more than they scored in the first. It was an amazing display of … something.

The Spurs started off the second half with a Kawhi Leonard three-point shot. And then he hit another, as the Spurs jumped out to a 39-35 lead. Marc Gasol brought Memphis back, but the Spurs looked a little sharper than they had in the first half and began to build a lead, with Kawhi’s shooting and Parker’s drives. Pau hit his threes and a deceptive drive by Kyle Anderson propelled the Spurs to a 56-50 lead with just over 2 minutes left in the third. The Spurs continued to pour it on as the quarter expired and led 60-51 after three.

The Memphis bigs started off the fourth quarter with crisp ball movement leading to good shots for Z-Bo under the basket and a Vince Carter three to bring them to within five. But back to back three-point shots from LaMarcus and Kawhi put the Spurs up by double digits, leading to a David Fizdale timeout. Memphis started to fight their way back with the big play being a deep three point shot from Vince Carter to beat the shot clock buzzer. They stepped up their defense, and sloppy ball handling from the Spurs allowed them to climb back into the game.

Then Conley and Leonard banged heads under the basket, leading to another scary moment for Spurs fans as Leonard fell to the court holding his head. But Conley got the worst of it as he cut his eyelid and started to bleed profusely onto the court. Conley needed stitches, but Kawhi stayed in the game, so apparently he was OK.

There was still a basketball game to play, and with the Spurs up 77-71, and almost 4 minutes to play, it was a long way from being decided. Wayne Seldon and Marc Gasol scored and then a Troy Daniels three-point shot put the Grizzlies up by a point. A pair of free throws from Kawhi brought the Spurs back, but Marc Gasol answered with a jumper. The Spurs missed on their next trip, and the Grizzlies used an offensive rebound to get the ball back with 15 seconds left to force a foul from the Silver and Black. After hitting a free throw, the Grizz led 82-80 with 13.7 seconds left. Leonard hit a silky stepback jumper to tie up the game with 4.9 seconds left.

The Grizzlies got Z-Bo open for a short jumper to regain the lead with 2.7 seconds left. But the Spurs still had life, with an alley-oop to Aldridge on the inbounds to even up the score with 1.6 left. Z-Bo was able to get up a shot at the buzzer, but it fell short and the game went to overtime tied at 84.

Simmons scored the first points for the Silver and Black in the extra period, and Troy Daniels answered for the Grizz. Both teams had trouble scoring, but a triple from Pau Gasol from the key put the Spurs up, and then a Patty three extended the lead to 6 with 1:44 left. With Conley still in the locker room getting stitches, the Grizzlies were in trouble. But they weren’t dead yet. A free throw from Seldon and a pair of free throws from Z-Bo brought them to within three. But Patty Mills kept them from getting even closer by drawing a charge to get the ball back with the shot clock off. The Grizzlies had to foul, and Kawhi sunk a pair to put the Spurs up by five with 17 seconds left.

Kawhi decided to put an end to the contest by ripping the ball away from Daniels, drawing a foul. He hit one of two free throws and the Spurs led by six with 13 seconds to go. The Grizzlies were unable to answer, and the Spurs win 95-89.

In a couple of weeks, the Spurs will be likely traveling to Memphis. What’s that smell? It’s only the river.

The Spurs have a rare home back-to-back, meeting the Los Angeles Lakers tomorrow night at 7:30 pm in the AT&T Center. The Lakers are in serious tanking mode right now, while the Spurs will be trying to strike a balance between resting players and trying to ready them for the playoffs, which should be a challenge for the Spurs coaching staff. After that they head to Dallas on Friday night for the first of another back to back. The Saturday game is against the Clippers, then they play Portland who are fighting for the final playoff spot in the west. The regular season finally comes to an end next Wednesday with a game in Utah against the Jazz.