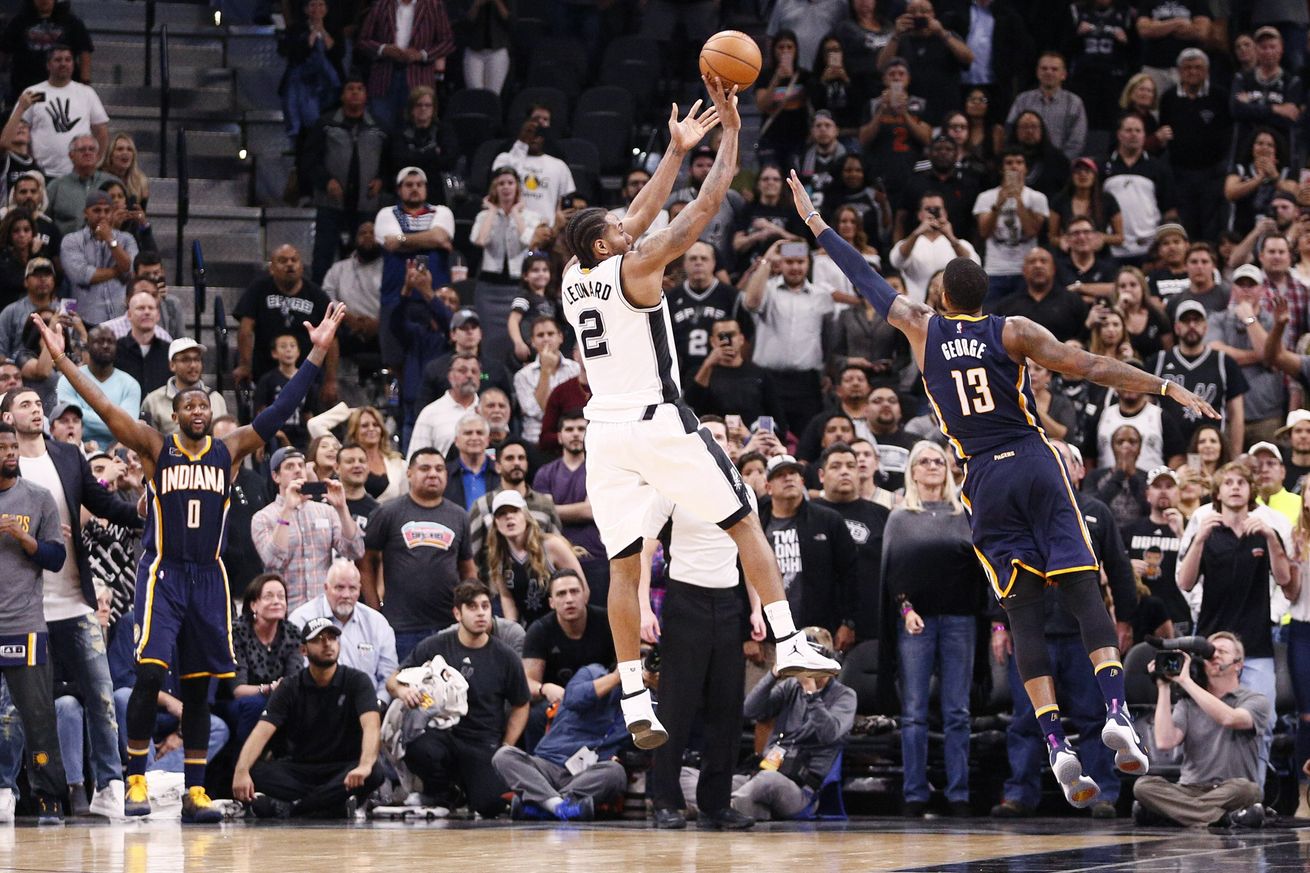 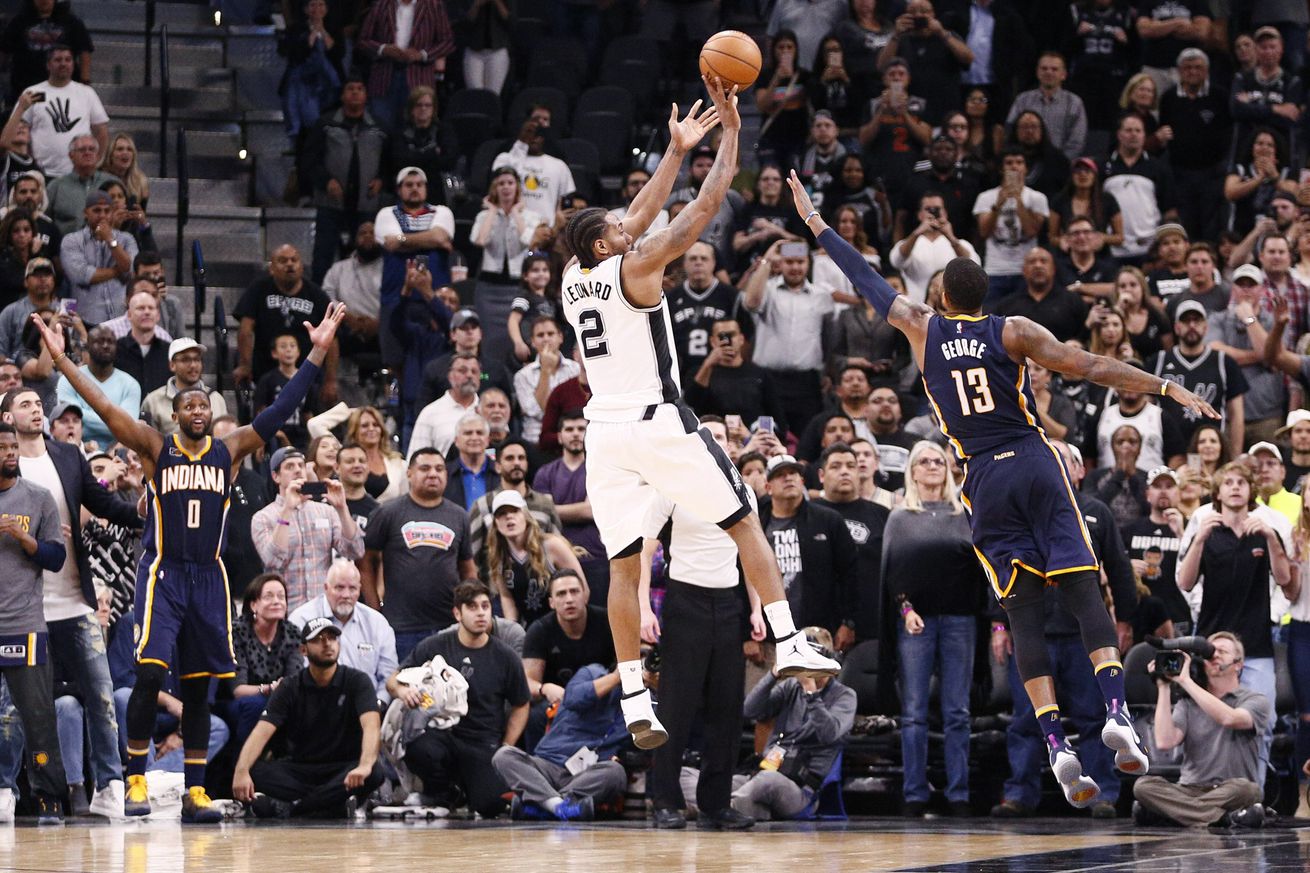 The Spurs shook off the Rodeo stench to win a thriller against the Pacers.

Playing in their first home game in a month, the Spurs looked lost in unfamiliar territory for much of the night. Without Tony Parker (sore quad), the offense was often stagnant and directionless, but aided by 18 points apiece from Pau Gasol and David Lee off the bench, Kawhi Leonard put on an MVP performance in the fourth quarter to lead the Spurs to a last-second victory over the Indiana Pacers.

The Western Conference Coach of the Month wasted barely two minutes in getting his first technical of the game after a bad offensive foul call on Murray. The Spurs did a good job of attacking the paint on offense but were just as bad defending it on the other end, leading to Pop’s first timeout at the 7:18 mark and the score knotted up at 13 apiece. The Spurs remained out of sync, hitting just one of their next nine shots on a put-back slap by Leonard. Gasol came in and lit a spark off the bench with a three, turnaround jumper and assist to Lee. A Manu Ginobili three-point play at the end of the quarter gave the Spurs lead, 29-28 after trailing by as much as seven.

The Spurs opened the second quarter with more energy but were still sloppy. Murray got a dunk off a Danny Green steal to expand the lead to three, but the Pacers quickly retook it at 36-35. The starters returned after a timeout with 8:15 left, but their shooting remained off. After another timeout, a Leonard three stopped a 10-2 run by Indy, and another and-one by Manu regained the lead for the Spurs, 43-42, with four minutes left in the half. Paul George responded with five straight points, and the Pacers stretched the lead up to six before four free throws in the final minute got the Spurs back within two, 49-47, at the half despite only shooting 39.5%.

Pop again called an early timeout, this time 52 sec into the third quarter, after the Spurs started the half by turning the ball over and allowing a four-point possession to the Pacers on a dead-ball foul and open three by C.J. Miles. Another three by Miles gave the Pacers their largest lead at 56-47 before a Leonard three-point stopped the bleeding. Gasol came in and again sparked the team with three blocks and better ball movement. Two threes from Kawhi tied things back up at 58-58 with 7:37 left. Another Gasol three gave the Spurs the lead again, but per usual Indiana had a response. Leonard picked up his fourth foul on incidental contact while going for a loose ball and had to sit. The Spurs entered the final frame down 76-73.

Davis Bertans opened the fourth quarter with a three to tie things back up again. Yet again, the Pacers responded with four straight points, and it was another early Pop timeout with 10:00 left. Lee scored six points, and Murray and Ginobili hit threes to tie the game back up at 89-89 with 6:56 left. A baseline jumper and three-point play by Leonard tied the Spurs largest lead since early in the first at 96-91 with four minutes left. An improbable banked three at the buzzer by Miles and a Myles Turner layup gave the lead back to the Pacer,s 99-98, with 1:35 left. The Spurs never got a shot on three straight possessions in the final minute, but Monta Ellis missed two free throws with 0:10 left to keep the lead stuck at one. Leonard backed down George and hit a turnaround jumper for with 2.4 sec left, George missed a three at the buzzer, and the Spurs eked out a thrilling victory, 100-99.

Check back later for more on this one. The Spurs hit the road again to take on the New Orleans Pelicans on Friday.