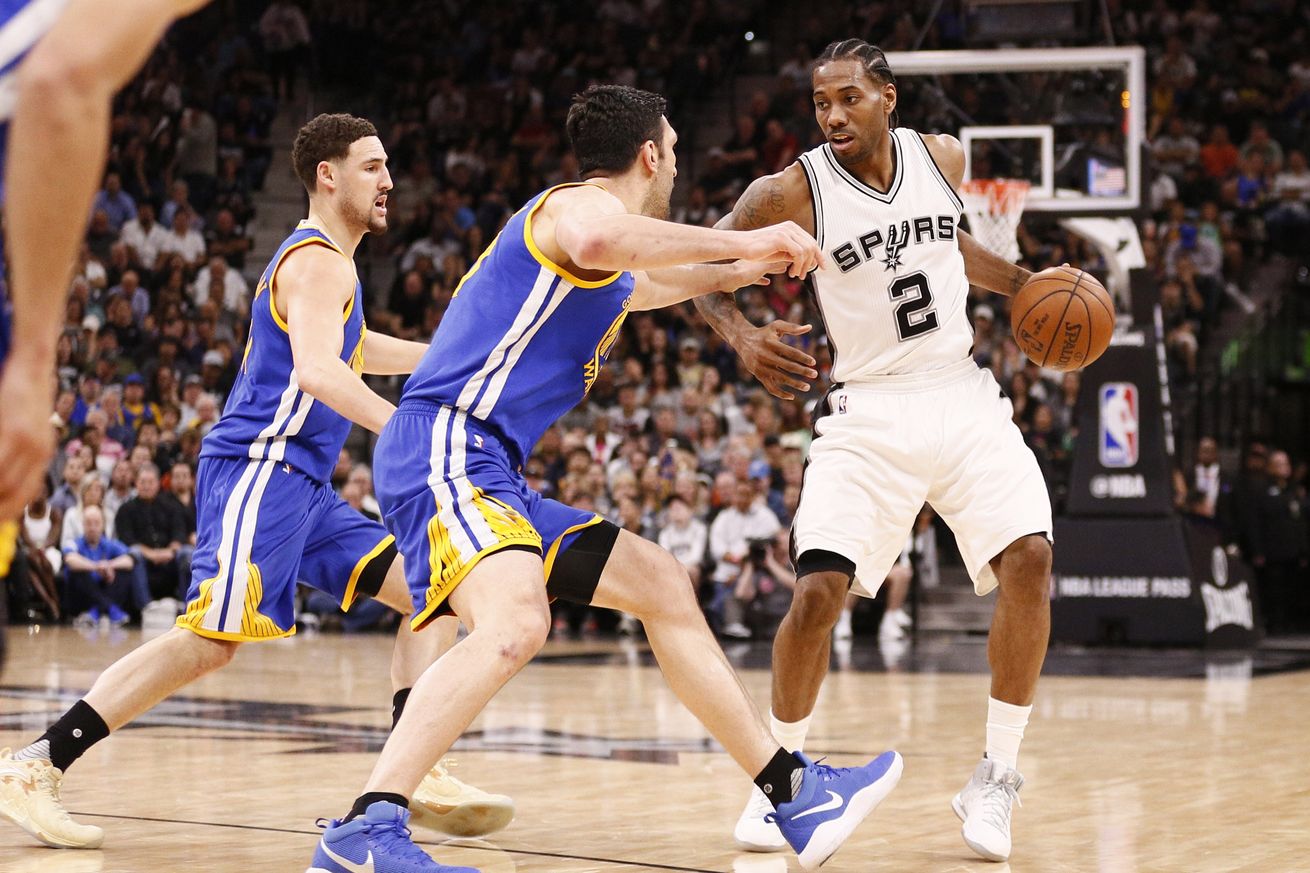 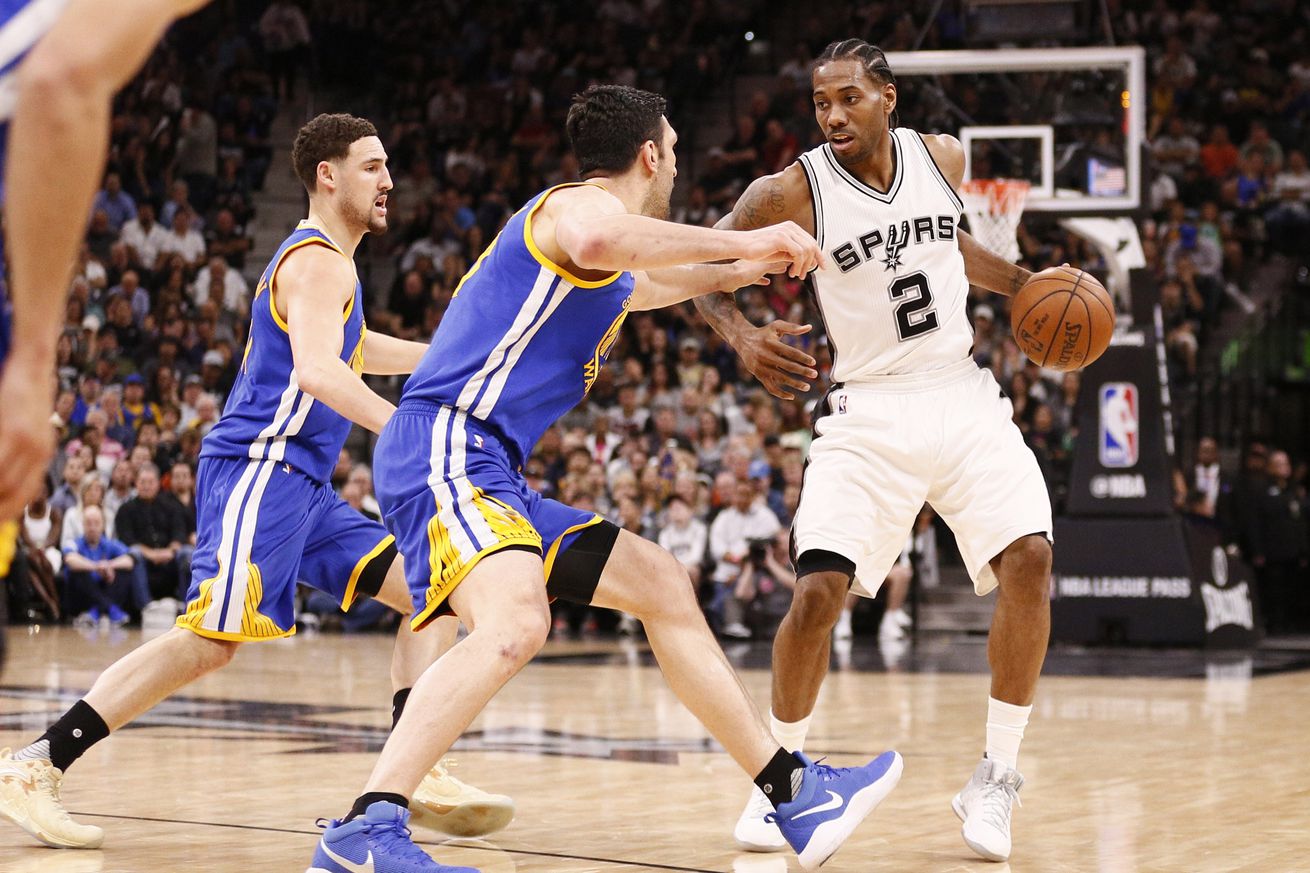 San Antonio led by as much as 22, but the Warriors made up ground quickly

San Antonio would have appreciated such a scorching fourth quarter from David West a year ago, but not Wednesday night.

Not when West, last year a Spur but now a Warrior, buried five shots in the fourth — for 15 points total — in Golden State’s 110-98 win over the Spurs in San Antonio, helping keep the Spurs at arm’s length in the second half.

With the win, Golden State now holds a 3.5-game lead on the Spurs for the top spot in the Western Conference.

The final 24 minutes, when Golden State almost never trailed, would have shocked anyone who bore witness to the game’s first 24 — the Spurs’ start was nothing short of scintillating.

They raced out to a 15-0 lead — behind three triples from Green — before the Warriors finally got on the board, but San Antonio’s blitz was far from over. Scores from Leonard and Aldridge swelled the Spurs’ lead to 23-3.

An off-balance triple from Aldridge gave San Antonio its largest lead of the game, at 22, before Gasol later tipped in a Leonard miss for a 33-13 lead.

The Spurs out-rebounded Golden State 14-4 in the first, including six offensive boards.

But the Warriors made an almost immediate dent in the lead in the second. Four Golden State buckets sandwiched around a dunk from Gasol trimmed the Spurs’ lead to 10.

Such is where the Spurs’ lead hovered for the next several minutes of the second stanza — that is, until the Warriors turned it on. A 7-0 Golden State run cut the deficit to single digits, then after Green tipped in a miss, the visitors ripped off a 9-0 run to tie things at 45-all.

The AT&T Center then descended into silence, roused soon after upon Gasol’s 3-ball.

Manu Ginobili got a friendly bounce on a triple to stretch his team’s lead back to seven, before Thompson responded with a triple and the teams traded baskets to end the frame.

The result was a 57-54 Spurs lead at the intermission.

The Spurs’ offense didn’t look to be trending upward in the span, either. After Green missed a contested jumper, Curry drilled a 3 on the other end for a 67-59 lead with 7:33 in the third period.

The lead never changed hands for the remainder of the third quarter, a product of the Warriors’ hot shooting — but the clubs did trade baskets. Aldridge threw down a dunk plus a foul to tie it at 72-all, but Golden State got buckets from West, Javale McGee and Iguodala to stretch its advantage back to 78-73.

The Warriors carried an 84-77 lead into the fourth frame.

The way Golden State held San Antonio at bay in the third — hitting shots — was the same way it did in the opening minutes of the fourth. Ginobili canned an early triple, only for Thompson to register one on the other end.

So went the fourth quarter, the Spurs cashing in shots only to be met by that and more from Golden State, until San Antonio’s offense ran out of gas and the Warriors kept their foot on it.

The Spurs, who have won five of their last six, return to action Friday night at Oklahoma City.