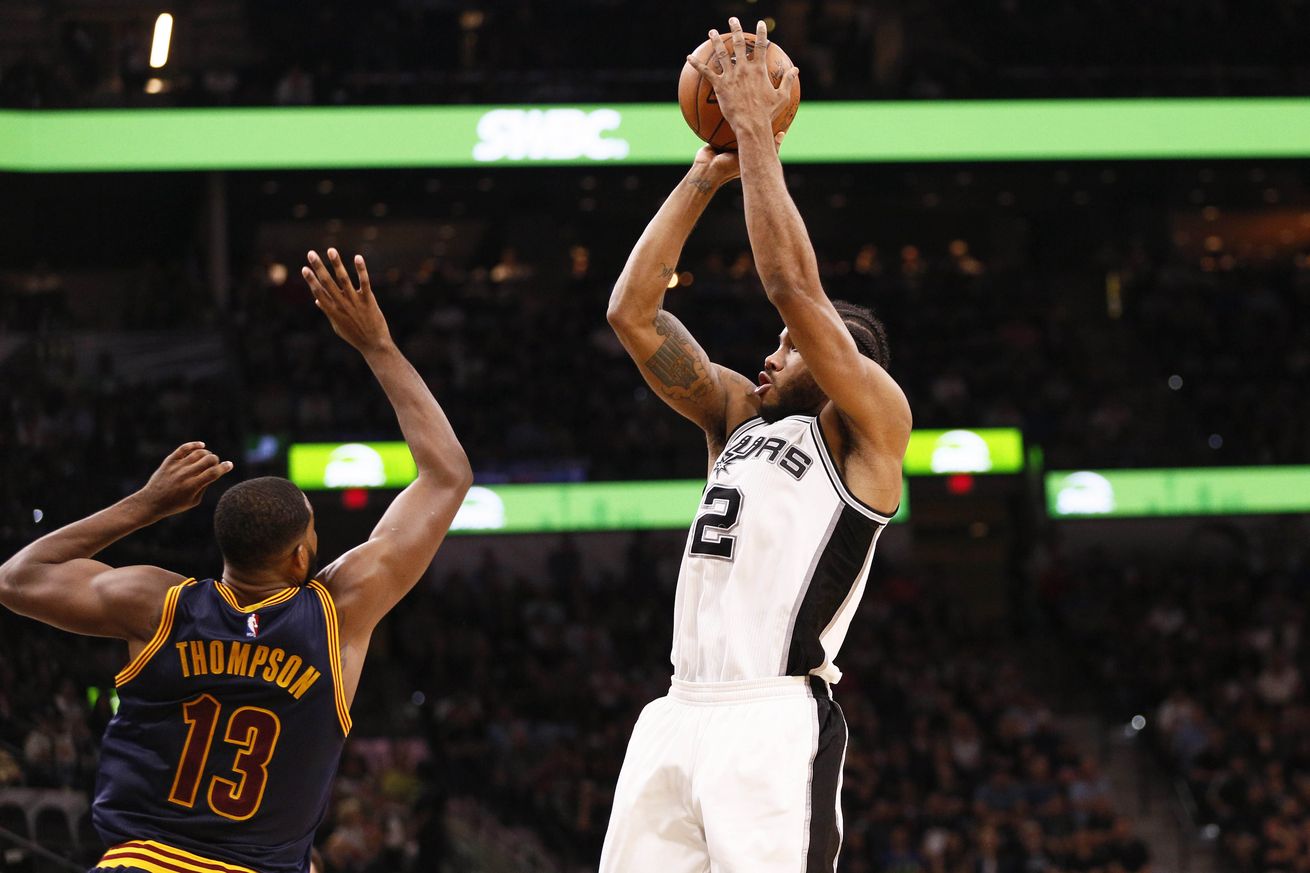 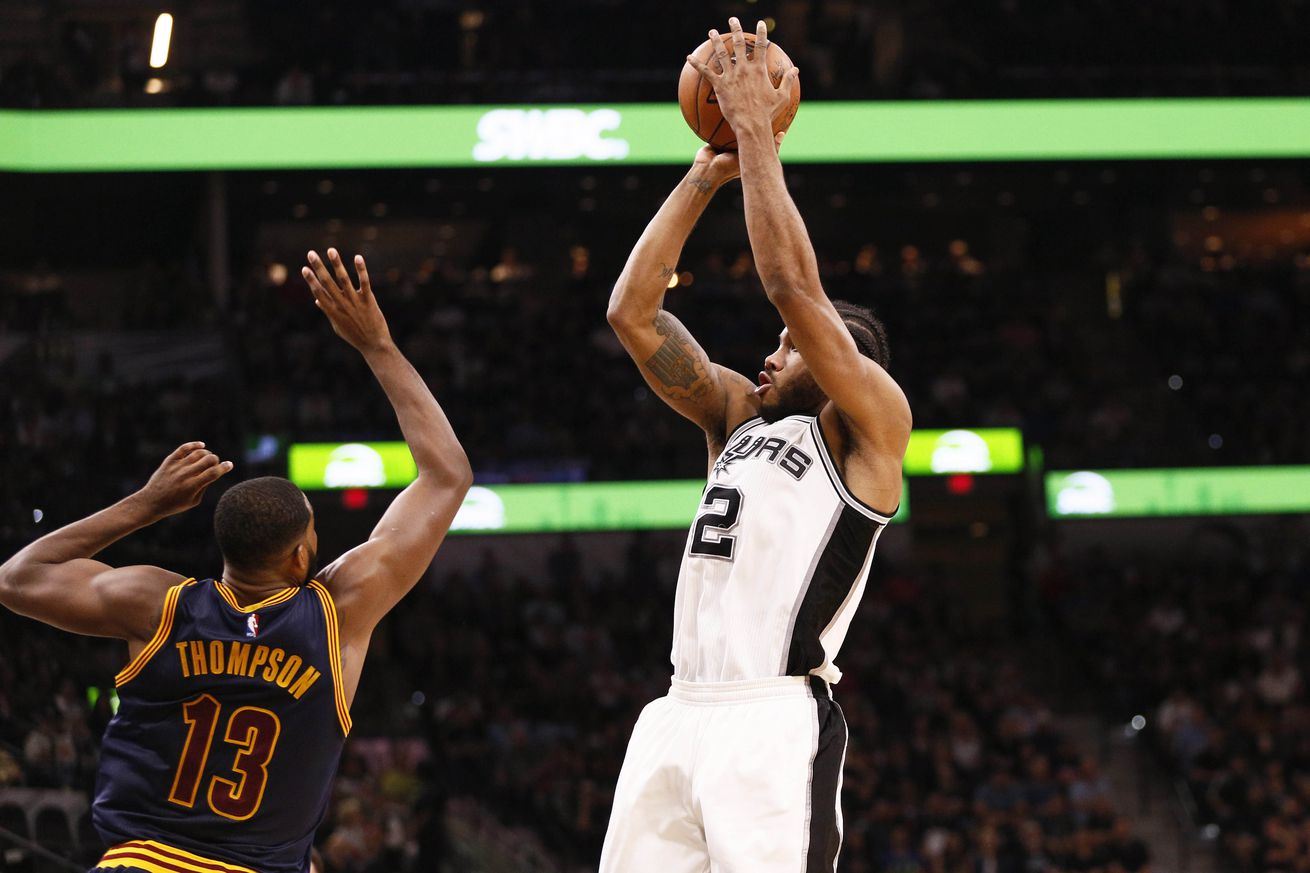 The Spurs swept the season series vs the reigning champs Monday Night, winning in resounding fashion

The Spurs began their Week Of Hell (CLE, GSW, OKC, UTA) with a resounding win against the Cavaliers Monday Night. In order to take control of first place in the West, San Antonio needs at least 3 wins this week with only 10 left before the playoffs, and a win against the struggling, but still reigning champ Cavs certainly aids in that goal.

Dewayne Dedmon started the night with a bang, dunking off a great pass from Lamarcus Aldridge to give us a taste of the great ball movement to come. The Spurs offense was sloppy at the start, with their second field goal not coming until almost three and a half minutes into the game, on a beautiful fadeaway from Kawhi. But then they game came alive. Pau had a wide open 3 to give the Spurs the lead, and then Kawhi stole a bad pass from LeBron for a Tony layup. LeBron had a beautiful move inside which was summarily blocked in beautiful fashion by Kawhi. Pau ended the first with another wide open 3, to give the Spurs a 28-18 lead.

LeBron began the 2nd by flying past the entire Spurs team and throwing down a hammer over Pau. The second unit for the Spurs had a great first half, although the struggling Cavs offense also made them look good. Pop got a well-deserved tech after arguing about a foul on LeBron’s dunk on an inbound pass. Kawhi was a great facilitator, getting his teammates the ball in great positions, and ending the first half with 4 assists. The Spurs bench outscored the Cavs’ 28-0 in the first half, and as Quixem predicted, the Cavs really struggled defensively in the few minutes LeBron was on the bench, as the Spurs’ lead ballooned to 16, thanks to a 10-0 run, as well as 5 Cavs turnovers. Manu gave us flashbacks of his old self, capping off a 22-6 run with an alley-oop lay-in (alley-in?) from Patty to give the Spurs a 24 point lead. Cleveland had 9 turnovers in the first half, to the Spurs’ one, gifting the Spurs 11 points off those turnovers. The Cavs’ 22 points scored this quarter would prove to be their best period of the night. The first half ended with a beautiful Kawhi hook at the buzzer to give the Spurs a 64-40 lead after 2.

Cleveland came out with much more intensity to start the third, but neither team could hit a shot. Danny Green had two HUGE blocks in the first half of the third quarter, one on LeBron and the other on Kyrie Irving, the latter leading to a cherry picking Kawhi dunk to inflate the Spurs lead to 27. They were still in control thorughout the quarter, but only scored 17 points in the quarter. They only allowed 18 from the Cavs, to take a 81-58 lead into the final frame. LeBron went down late in the third after being elbowed by David Lee while going for a rebound, and stayed out for the remainder of the game.

Before the benches were cleared for both teams with about 10 minutes left, the Spurs bench outscored the Cavs’ 39-10, which has to be a huge concern for the Cavs going into the playoffs. After getting “MVP!” chants all night, Kawhi sat down with 25 points and 3 huge steals. LA and Pau ended the night with 14 a piece, Manu had 12, and Danny Green sat with 4 blocks, every one of which will make the highlight reel. LeBron led Cleveland with 17. Cleveland is now in second place in the East for the first time since November 2015.

San Antonio has now won 5 straight games, and continues their Week Of Hell Wednesday at home vs the Warriors