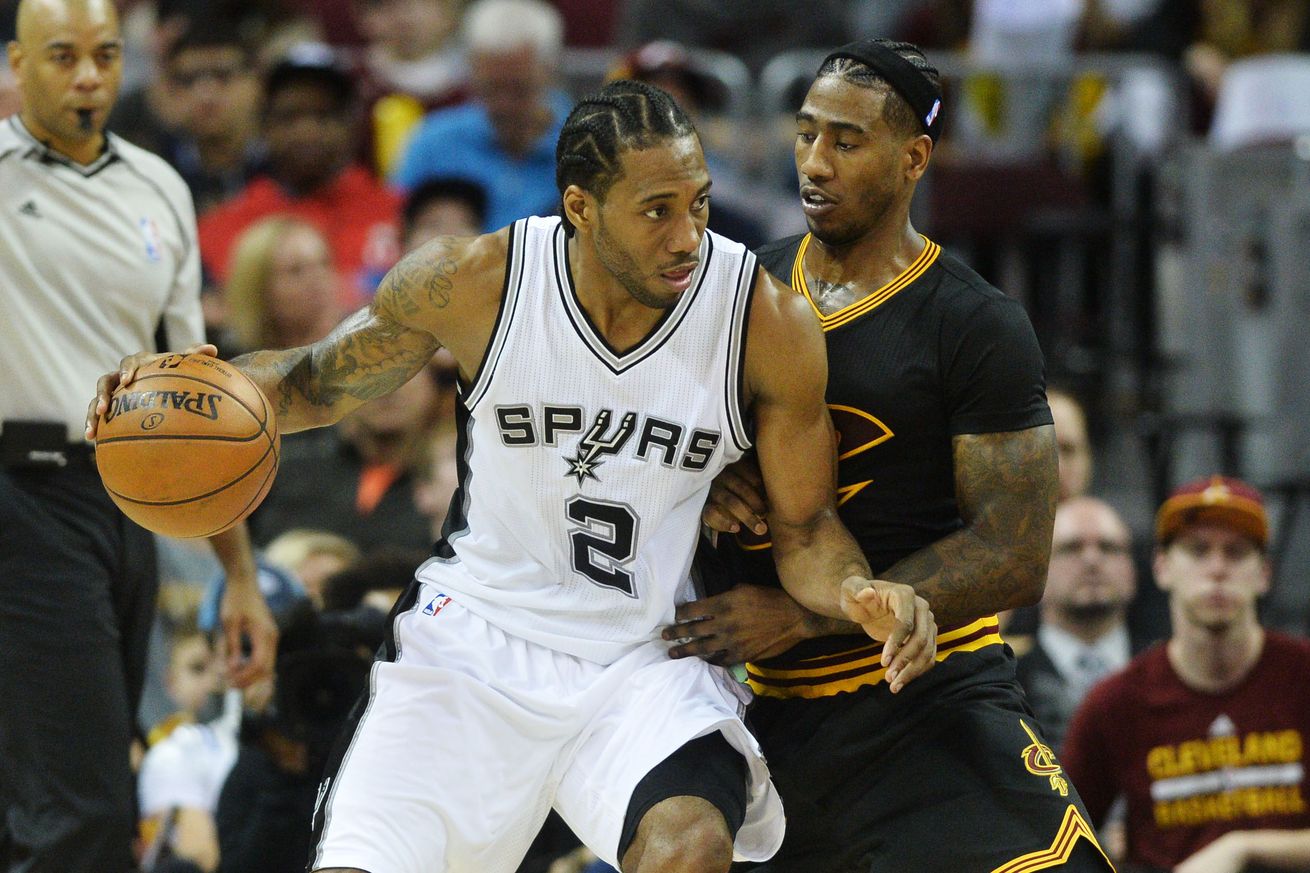 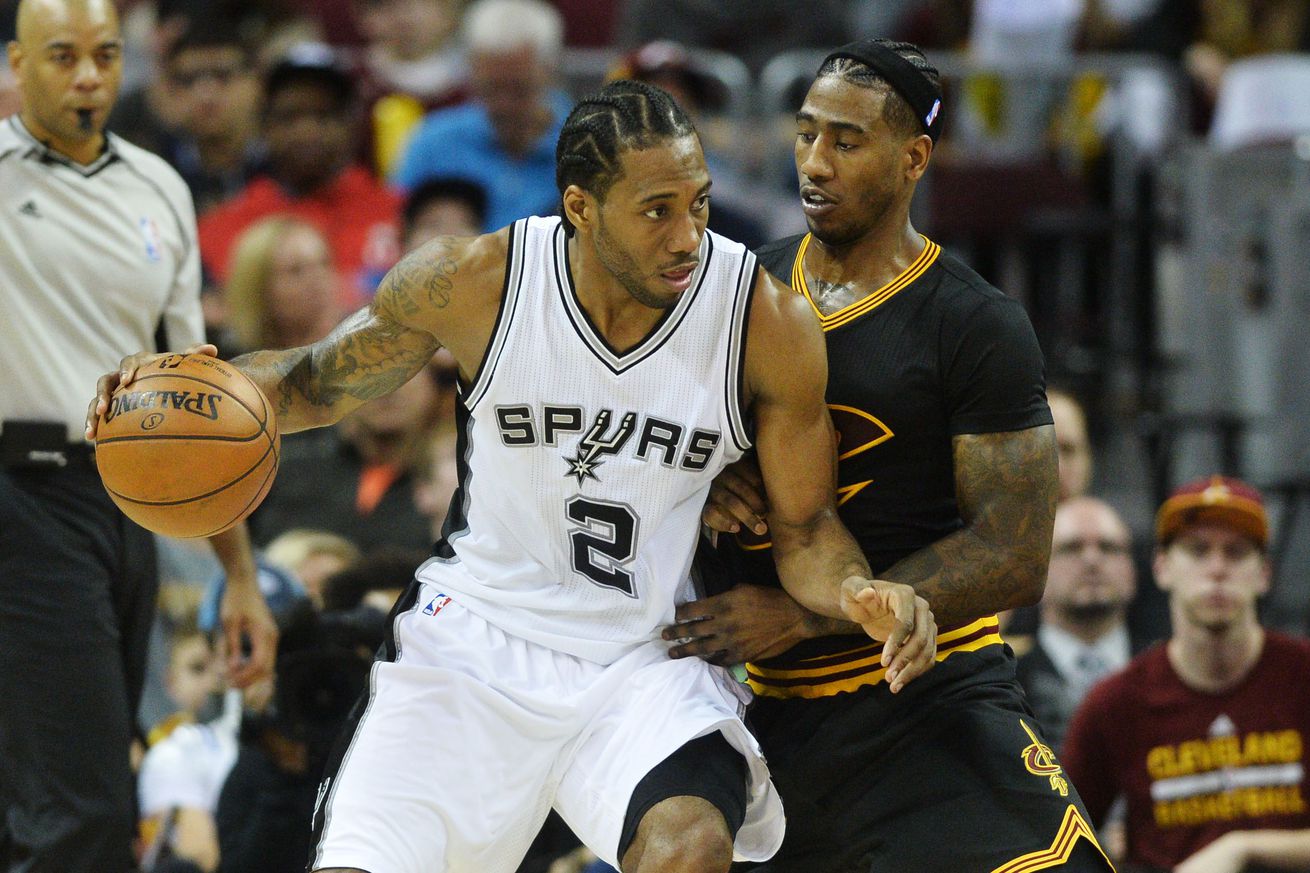 Short-handed Spurs defeat the defending champs on the road in an overtime thriller.

Despite playing without Tony Parker and Pau Gasol, the Spurs entered the domain of the defending champion Cleveland Cavaliers hoping to make their biggest statement of the season since an opening-night win at Golden State. After a back-and-forth game that 48 minutes couldn’t decide, the Spurs won it in overtime on the back of Kawhi Leonard’s first career 40-point game.

The Cavs opened the game hitting two threes on their first three possessions while the Spurs struggled to get any open looks early, leading Pop to call a timeout with his team in an early 12-4 hole. The Spurs came back with an 8-2 run by pushing the Cavs in transition, and Tyrone Lue to called a timeout with 6:26 left in the first quarter. The Cavs responded with a 10-0 run to stretch the lead to 24-14 before a Dewayne Dedmon dunk temporarily stopped the bleeding. Careless and timid offense and poor roll coverage on defense kept the Spurs from getting any closer, and they ended the quarter down 33-22.

Pop said during his sideline interview that the Spurs needed to make shots and stay in front of their men more defense, and the bench responded by opening the second quarter with a 19-2 run to gain their first lead, 41-35. The offense, especially Dejounte Murray, stayed hot, but two straight threes by Kyle Korver kept the Cavs within striking distance. LeBron James picked up his third foul with three minutes left in the half and sat down, but the Spurs couldn’t take advantage and entered the half down 58-57 despite hitting 14 of 17 from the field in the quarter. Leonard led all scorers with 14 points, and Murray had 10 points in 12 minutes of action.

Both teams continued to trade baskets to start the third quarter. Murray remained impressive despite the Cavs putting LeBron on him on defense. A three by Iman Shumpert put the Cavs up 73-70 with with 7:09 left, leading to a Spurs timeout. The entire quarter was a back-and-fourth affair, but the Cavs were in the bonus relatively early. Fortunately they shot their free throws poorly, because the threes kept raining in for them. Threes by Kyrie Irving and Shumpert in the final minute gave the Cavs the lead, 89-84, heading into the final frame.

The Spurs defense stiffened up to start the fourth quarter, and Leonard scored seven straight points to reach his sixth straight 30 point game as the Spurs regained a four-point lead. He asked to come out after getting whacked on the hand by Richard Jefferson but returned following a timeout and scored immediately. A Patty Mills three and Aldridge put-back with just over five minutes left gave the Spurs their largest lead of the game at 105-96. The Cavs responded with a 5-0 run, and after the score was stuck at 107-102 for a while, a couple of free throws and a long three by James tied things up with 34 sec left. Neither Leonard or James could hit shots for the win, and the Spurs entered their second overtime game of the season.

The Spurs opened the overtime period with three turnovers sandwiched around four points from Leonard to keep it tied, 111-111. Irving had the first six points of the period for the Cavs. The Spurs led 114-113 with 1:08 left, and a timeout was called as Manu Ginobili left holding his back. Aldridge hit a baseline jumper to stretch the lead to three, and the Cavs called a timeout with 25 sec left. James threw the ball away on a miscommunication, Leonard got a dunk off a jumpball for a career high 41 points, and the Spurs won 118-115.

Check back later for more on this thriller! The Spurs return to action on Monday in Brooklyn.