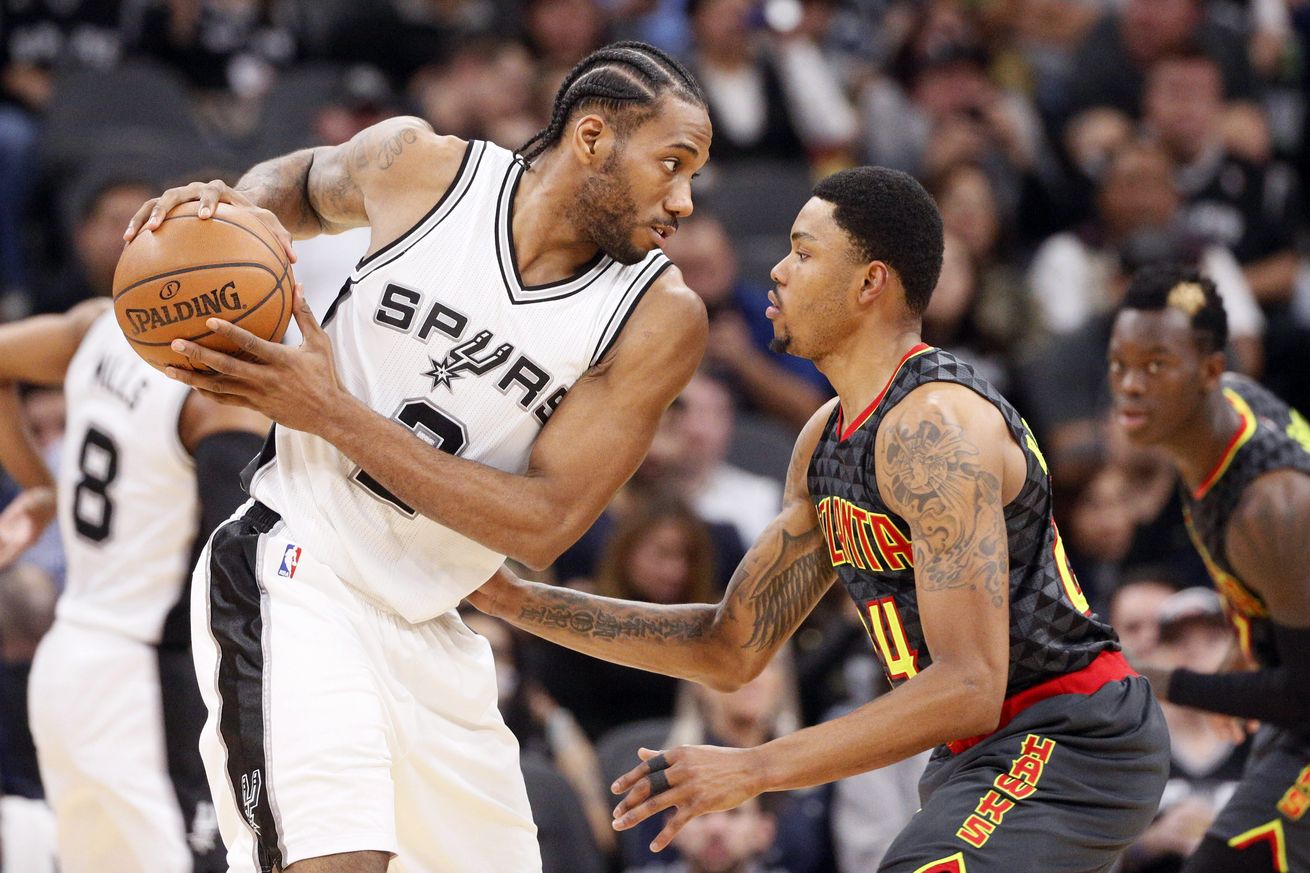 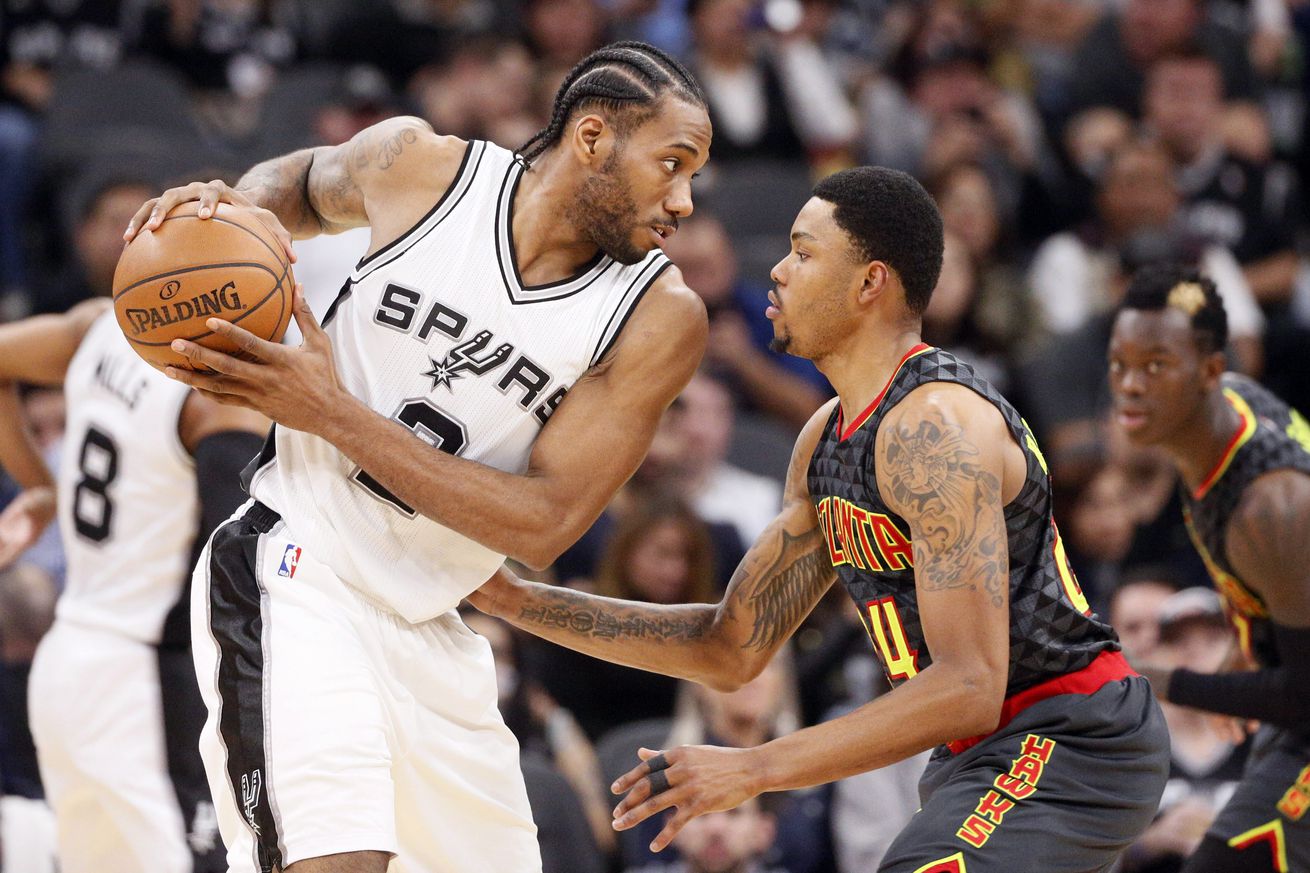 Atlanta got as close as one, but the Spurs exerted themselves and kept the visitors at arm’s length

Kawhi Leonard bolstered his MVP resume Monday night, if in a small way.

His team ahead of Atlanta 97-91 with under two minutes to play, the Spurs forward crossed over a few times — the shot clock ticking under 5 seconds — before pulling up and draining a 3-pointer.

The trey gave his team a nine-point lead, and Spurs guard Patty Mills sunk a fadeaway jumper on his team’s next possession to, more or less, ice the Spurs’ 107-99 win over the Hawks in San Antonio.

The Hawks never pulled within six after the two shots.

Leonard totaled 31 points in the win, while Mills (15), Danny Green (14 behind three triples), David Lee (14) and Pau Gasol (13) all tallied double-digit points for the Spurs.

The Hawks entered the fourth the same way they ended the third: pulling back into the game. After trailing by as much as 15, Atlanta clawed within 86-85 around the 8-minute mark of the fourth period, but the Spurs responded with triples from Bryn Forbes and Green to widen the lead back to a comfortable margin.

Schroeder later scored to make it 97-91, but that’s when Leonard drilled the dagger 3-pointer.

The Spurs vacillated between a wide and narrow margins, but they started out staring up from a hole.

They made just 1 of their first 5 shots — good for an 8-2 deficit — but it didn’t take long for them to turn things around. Mills gave San Antonio its first lead, at 11-10, later inflated upon a 3-ball from Gasol.

Paul Millsap later used a free throw to cut the lead to 23-18, but San Antonio got a triple from Davis Bertans and a buzzer-beating, pullup jumper from Leonard to secure a 28-18 Spurs lead headed into the second stanza.

The Hawks’ field goal drought that began with a shade over three minutes to play in the first carried on well into the second, a span that afforded the Spurs a sizable lead. Bertans first scored to widen the margin to double digits — 31-18 — before the Hawks later got a jumper from Ersan Ilyasova to trim the lead to 31-23.

Atlanta went 9:24 without a field goal.

After the teams traded buckets for a few possessions, Ilyasova used a trey to cut San Antonio’s advantage to 36-29.

The teams then began swapping baskets again — the only difference was that the Spurs’ came in 3-point plays. First it was Leonard hitting all three free throws before he Euro-stepped his way into the lane and finished an and-one with his left hand.

The old-fashioned 3-point play lifted the Spurs to a 41-29, but their 3-point onslaught was far from over.

After Atlanta squeezed off a quick 4-0 run, Leonard again notched a 3, this one to give San Antonio a 44-33 lead. Gasol and Ginobili then both hit triples, the second of which ballooned the Spurs’ advantage to 14.

Lee and Schroeder each scored on back-to-back occasions for their teams, but Schroeder deposited a layup right before halftime, slicing the Spurs’ lead to 54-43 at the intermission.

The Spurs’ lead hovered around 12 and 13 for the first few minutes of the third frame, reaching an apex at 15 when Leonard drilled a 17-footer.

From there, though, the Hawks began to chip away at the lead. Schroeder’s jumper minutes later made it a 10-point game, and after Dewayne Dedmon laid in a basket following some slick ball movement, the Hawks made it an 8-point game when Millsap scored.

Three turnovers plagued the Spurs in the third, but they entered the fourth up 81-73.