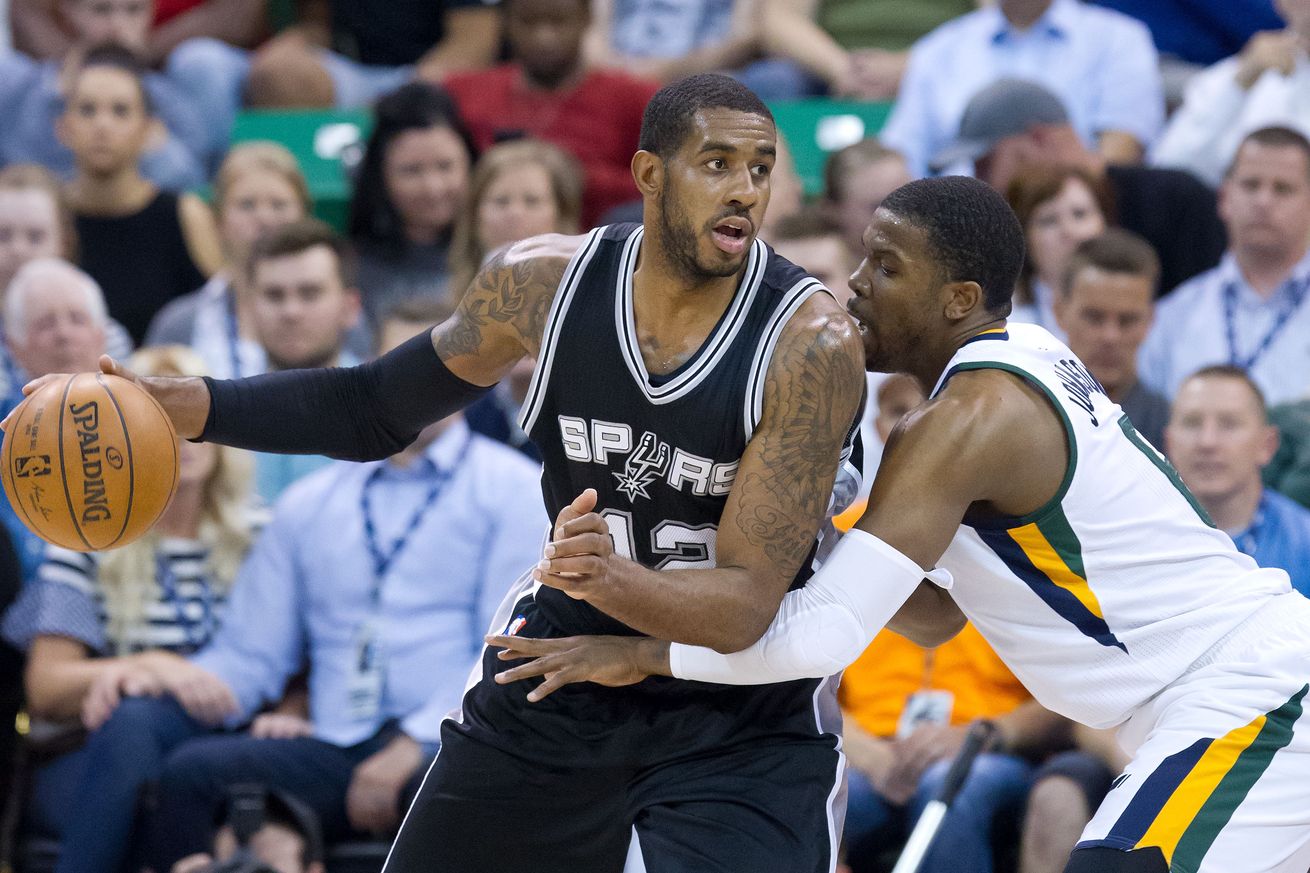 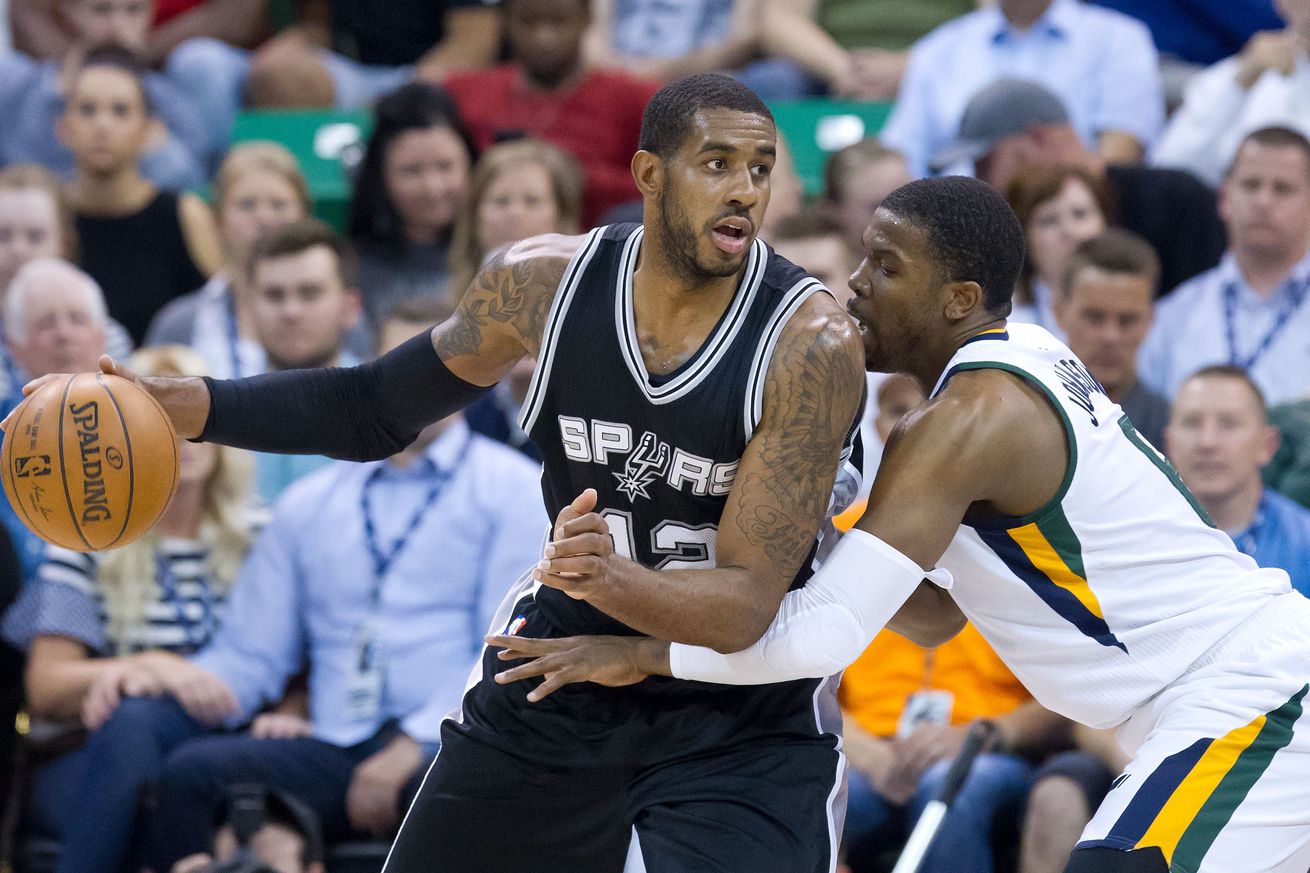 The Spurs lost to a hungry Jazz team in their final regular season tune up.

In a game that meant very little for the Spurs and a great deal for the Jazz, San Antonio dropped a close one, 101-97. LaMarcus Aldridge led the Spurs with 18 points, with Kawhi Leonard and Tony Parker chipping in 14 apiece.

The Spurs didn’t have an ideal start, as the former Spur Hill knocked in a deep three and followed it up with a steal and dish to Gobert for a dunk. Coach Popovich called a timeout after that play, just 45 seconds into the game. After the break the Spurs settled down a little, but neither offense was able to get much traction. Parker hit his first three shots and scored 6 of the first 8 Spurs points. Once the bench units came in the game began to open up, which is to be expected in a game between two of the league’s best defenses. The Spurs got a couple of three pointers from Patty Mills sandwiched around another from Manu Ginobili. The issue was Utah, who shot the lights out and hit 4 triples of their own, including a long buzzer beating banker by Rodney Hood. The Spurs trailed 32-23 after the quarter.

It was surprising to see the Spurs shoot 52.6% from the field and the Jazz shoot 56.5%, given the usual stinginess of both teams on defense.

Review (Goble): Hood’s made shot in Q1 of #SASatUTA was ruled a 3 and confirmed, 3-point FG. pic.twitter.com/e1x5cAcxjf

Coach Pop made an interesting lineup decision to start the second quarter, as Aldridge and Green joined Mills, Jonathon Simmons, and David Lee on the floor. Pop and several players have said these last few games are for executing game plans the team will use in the playoffs, so the decision to stagger the perimeter defense of Leonard and Green and the scoring of Leonard and Aldridge could be a sneak peek at the playoff rotations. Or it’s just a random occurrence in a mostly meaningless game where the Spurs weren’t getting much going on either end of the floor. As always, trust in Pop and things usually work themselves out.

Turnovers were a problem throughout the first half, so despite solid shooting, the Spurs weren’t able to gain much ground. Hill led a balanced Utah attack that featured 5 players scoring 8 points or more, and the Spurs were down 53-46 at halftime.

5 San Antonio turnovers in the quarter led to 7 Utah points. For the half, both teams committed 10 turnovers, but the Spurs were only able to convert those into 4 points versus 13 for the Jazz.

The third quarter began much like the first two, with both teams playing deliberately and scoring coming slowly. Parker showed some aggressiveness, knifing into the lane for a vintage layup, nailing a jumper, and knocking in a pair of free throws after being fouled on another drive. Pau Gasol and Ingles got into a bit of a skirmish midway through the period, with both players earning personal fouls for jostling with each other on a possession. A lengthy review by the officials showed Gasol also shoved Ingles in the back, earning Pau a technical foul as well, his first of the season. Gasol did record his 20,000th career point late in the period, becoming just the 43rd player to perform that feat. The teams continued playing slowly but shooting well throughout the rest of the quarter, and the Spurs were behind 82-72 after three.

Both teams tend to play slowly relative to the rest of the league, and through three quarters the total fast break points for the game were 2 for San Antonio and 4 for Utah. Somehow it actually felt like less than that.

A few days ago Pop said he would mostly play standard rotations and minutes, but even so it was a bit surprising to see Aldridge and Parker starting the final quarter. They were joined by Simmons, Kyle Anderson, and Davis Bertans, and that group made a little run to pull within 4. Kawhi made a brief appearance in the quarter, as well.

Anderson, in particular, had a nice run late in the third and through the fourth quarter. He drilled a corner three after a classic “good to great” type possession, and picked Dante Exum’s pocket leading to a run out assist on a dunk for Simmons. He then tied the game at 88 on a bucket with about 5 minutes remaining. A couple minutes later, Anderson drove the lane and kicked to Bertans who drilled a three and got fouled, converting the free throw to put the Spurs back in front. The game unexpectedly got really entertaining and exciting down the stretch, as Bertans and Alec Burks traded deep balls. Bertans had another try to tie the game late, but it rimmed out and the Spurs lost 101-97.

16. That’s the number of wins left to bring the trophy home, and that matters more than any stat from this game.

throw it down, J Simms! pic.twitter.com/0F182BHShV

Up next for the Spurs: Finally, the playoffs! The Spurs will host the Memphis Grizzlies for Game 1 Saturday night at 7:00 PM CST.