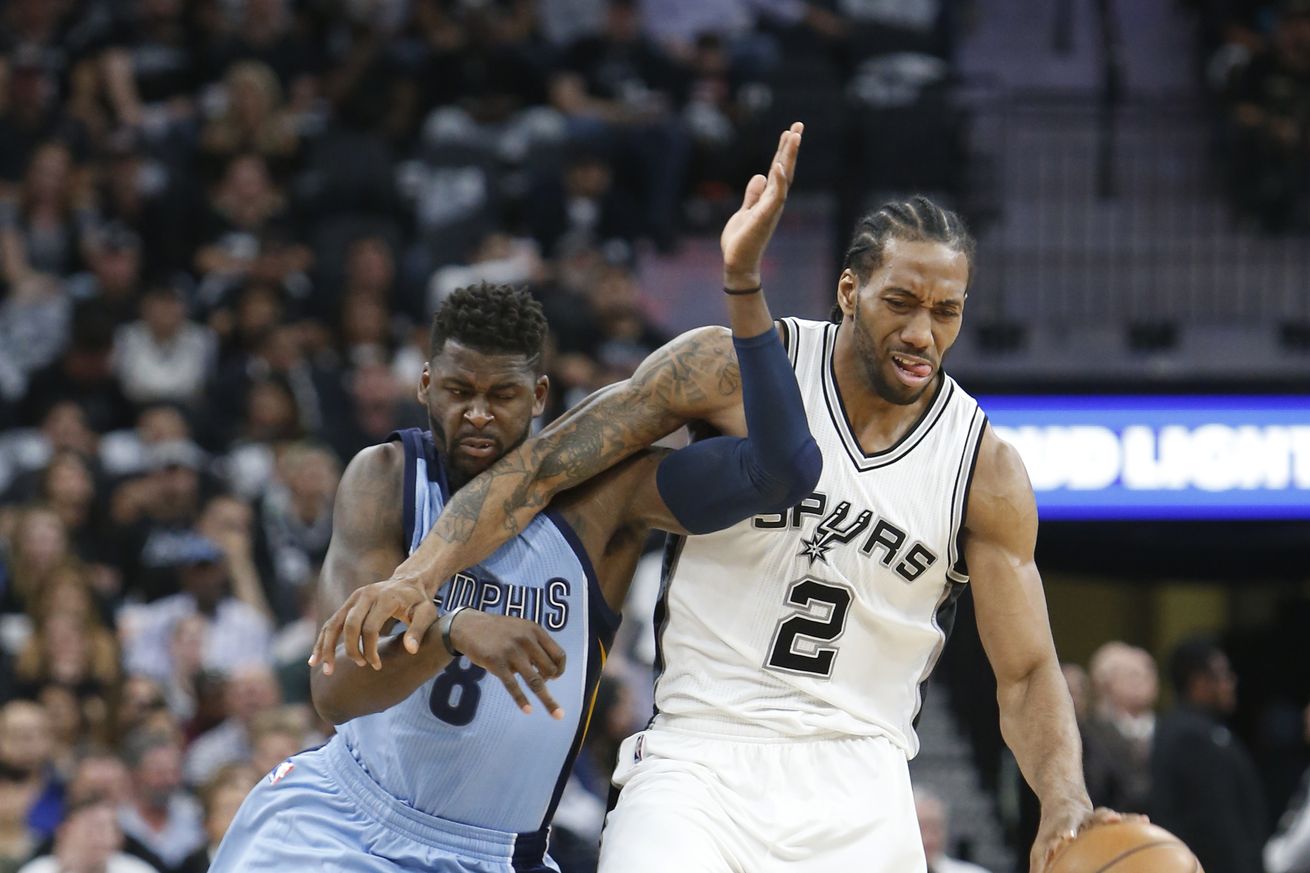 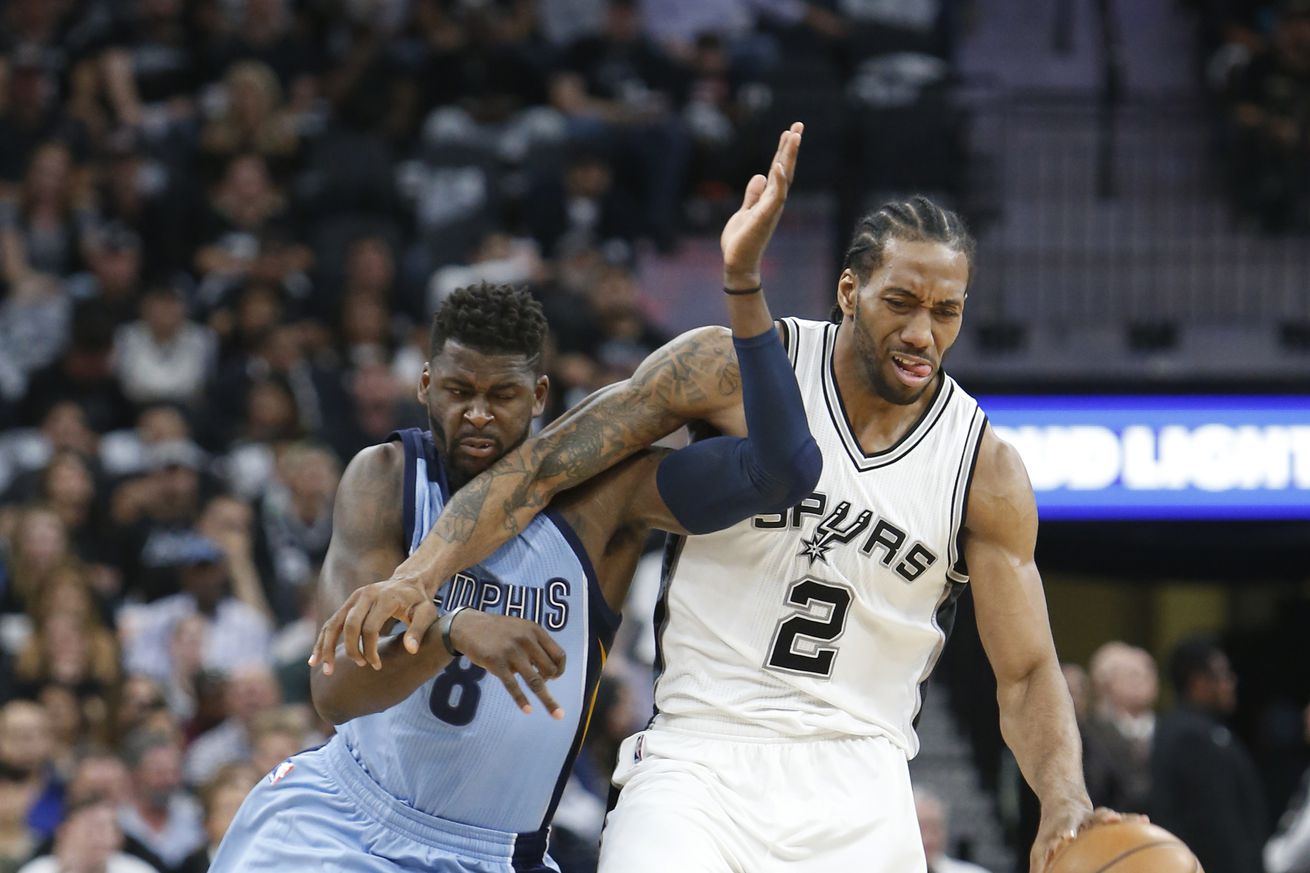 The Spurs got a test from Memphis in the second half and passed it with good play down the stretch.

With their 96-82 win over Memphis, the Spurs have now won their last 10 playoff games against the Grizzlies.

The first half of this game played out like the last three quarters of the first game of the series with the Spurs playing smothering defense and making the Grizzlies’ life on offense a complete nightmare.

Memphis scored just 54 points in the final three quarters of the first game, an average of 18 points per quarter, and in the first half on Monday night they managed only 37. It looked like it would be another blowout with the Spurs leading by as much as 26 in the second quarter before the Grizz finished the quarter with a 7-0 run to cut it to 19 at the break, 56-37.

But Memphis took that small run and built on it as the game resumed in the third, starting the quarter with noticeably more intensity on the defensive end. Over the first six minutes of the period they managed to hold the Spurs to just five points. After the game Gregg Popovich said that during that stretch “our offense went in the toilet because of their great defense”.

Combine that six-minute stretch with their 7-0 run to finish the first half and all of a sudden the Spurs’ 26-point lead was down to just 11 with tons of game left to play.

It was a good test for the Spurs that the Grizz fought themselves back into the game. By the end of the third it was a 10 point game.

A 6-0 run to start the fourth from the Grizz made the game very interesting and gave the Spurs a scare. San Antonio responded well, refocusing on defense and running some spread pick-and-roll on offense to get them going. They held the Grizzlies to just 11 points in the final 10 minutes of the game and the home team put 19 on the board in the last eight-and-a-half minutes.

Danny Green had a nice sequence with the Spurs up five with six minutes to play. He drilled a deep three and then blocked a Mike Conley layup on the other end. Kawhi scored off the block and it was back to a 10-point lead for SA. They never looked back, pushing it to 13 on a Pau Gasol triple on their next possession.

I mean, it’s not great that the Spurs allowed a 26-point advantage to get cut to just four, but it is absolutely great that they didn’t wilt and let Memphis come all the way back. They settled in and dug deep to get a good playoff win at the AT&T Center on Monday night. It’s the playoffs, it’s not going to be easy. It’s been a good start for the good guys.

The number on the whiteboard in the Spurs locker room now reads 14.

Kawhi Leonard is the only player to score 35+ points on less than 15 shots in a playoff game in the last 30 years.

Most of Fizdale. You could tell he was boiling from jump: pic.twitter.com/b8ihdw5MmM

Besides thoroughly enjoying that show from my seat, I also started to think about what he was saying.

Now, I know that was a $50,000 fine he took for his players, to show them that he’s absolutely with them, and not really for the officials but when he said “explain it to me”, my first thought was this:

Field goal attempts in the paint don’t count fouls. If a player is fouled attempting a shot in the paint, he’ll go to the charity stripe. There will be no mention of the attempt in the scoresheet. So a player attempting 20 shots in the paint and getting hacked on all of them would read: zero shots in paint, 40 free throw attempts.

My second thought was this, if you’re strategy is to play incredibly physically on the perimeter (and everywhere), be prepared to get whistled. Without Tony Allen, the Grizz have had to try to guard Kawhi with a number of people that simply aren’t equipped for the task. Kawhi has become elite at getting to the line, finishing 11th in the league in free throw attempts per game in the regular season. He’s probably going to continue to get the the line. For what it’s worth, he shot 89.5% from the free throw line this season, it’s probably best to try to keep him off of it.

The Spurs, for their part, make a point of emphasizing great defense while making it a point to not commit fouls. Each year the team is near the bottom of the league in fouls per game (they were 24th this season).

Is Kawhi getting the benefit of the doubt with whistles? Sure, some, as MVP candidates do.

Is Kawhi being aggressive when he’s guarded by James Ennis, JaMychal Green, Vince Carter and even Marc Gasol? Absolutely, and it’s working.

Kawhi is going to get his one way or the other, Memphis just doesn’t have an answer to him without Tony Allen available.

The Spurs will get two days off before they travel to Memphis for Game Three. You can catch that game on Thursday at 8:30 Spurs time on TNT or Fox Sports Southwest.