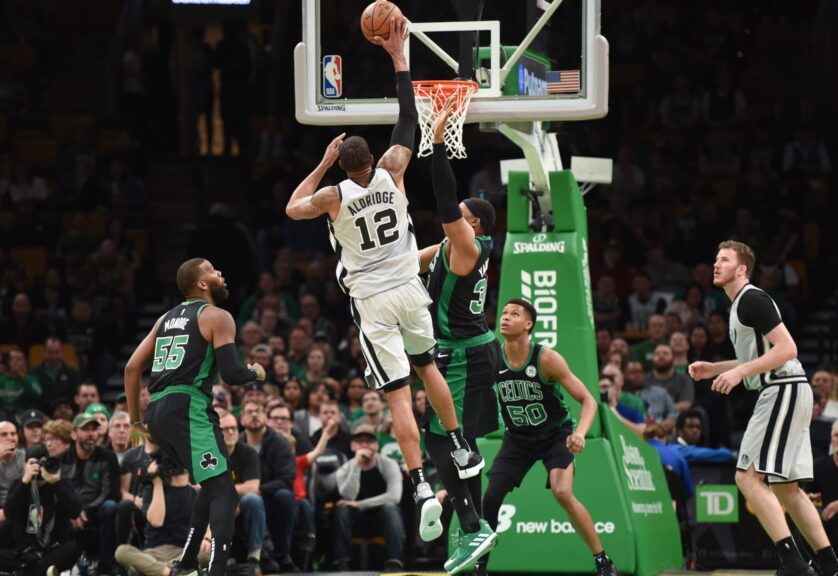 While the San Antonio Spurs have outperformed expectations and made some preseason predictions look foolish, other teams around the league haven’t been quite as fortunate. And no team takes the underwhelming cake this year more than the Boston Celtics.

After being just two games away from the NBA Finals last year, the Celtics are floundering this year. Forget contending for a championship, this team is just trying to keep its head above water. Danny Ainge has been up-front about the team’s struggles and it seems like the team is primed to shake things up before the trade deadline.

If “Trader Danny” wants to keep fiddling, the San Antonio Spurs have veterans who can help. Here is why the Celtics should be making calls to Brian Wright and gauging what it would take to acquire one of the Spurs vets.

Before we get into exactly how the Spurs veterans can help the Celtics, let’s cover where Boston is coming up short. With Jaylen Brown and Jayson Tatum leading the charge, you’d think that the Celtics would be able to have a dangerous offense. Unfortunately for the Boston faithful, that hasn’t been the case.

On the season, the Celtics rank 28th in the league in assists per night. The loss of Gordon Hayward to the Hornets and Marcus Smart to injury have really hurt them in that area. Tatum and Brown have both improved as facilitators but the combined loss of Smart and the regression of Kemba Walker as a playmaker have taken the edge off this once potent offense.

Another area where the Celtics have struggled is on the glass. Outside of Tacko Fall (who hardly ever sees the floor), Boston doesn’t have a single player over 6’10. Height hasn’t stopped the trio of Tristan Thompson, Daniel Theis, and Robert Williams from cleaning up rebounds in the past but the three haven’t been able to get it done this year.

This has really hurt them on the defensive end of the floor where the Celtics have struggled to close out possessions. They’re 25th in the NBA in defensive rebounding numbers and correspondingly give up the 5th most second-chance points in the league. They’re simply giving their opponents too many bites at the apple.

The only playmaking veteran the Spurs could offer Boston would be Patty Mills. And barring an absolute haul, I don’t see the Spurs giving him up. He means too much to the franchise and is such a crucial part of their second unit that the chances of them trading him are just about zero at this point.

The most appealing Spurs veteran from the Celtics’ point of view is probably LaMarcus Aldridge. He’s got the height they need, could help solve their rebounding problem and would give them an additional scoring threat outside of their big three. He also adds a splash of rim protection as a bonus.

Let’s be blunt though, Aldridge has lost a step or two and the addition of him alone likely doesn’t elevate the Celtics to contender status. But it’s a start and it surely wouldn’t cost Boston much to pull him away from San Antonio.

He’s an unrestricted free agent at the end of the season and the writing is on the wall of the AT&T Center. He’s not coming back next year, at least he shouldn’t. If the Celtics offered a young player such as Romeo Langford and a 2nd round pick would the Spurs really say no? I can’t be certain but I’m willing to bet they’d give it consideration.

I’m not going to pretend that trading for one of the San Antonio Spurs veterans would solve all of the Boston Celtics’ problems. But it’s a start. And given the dire position that the Celtics find themselves in, nothing should be off the table at this point. Trader Danny, make the call.