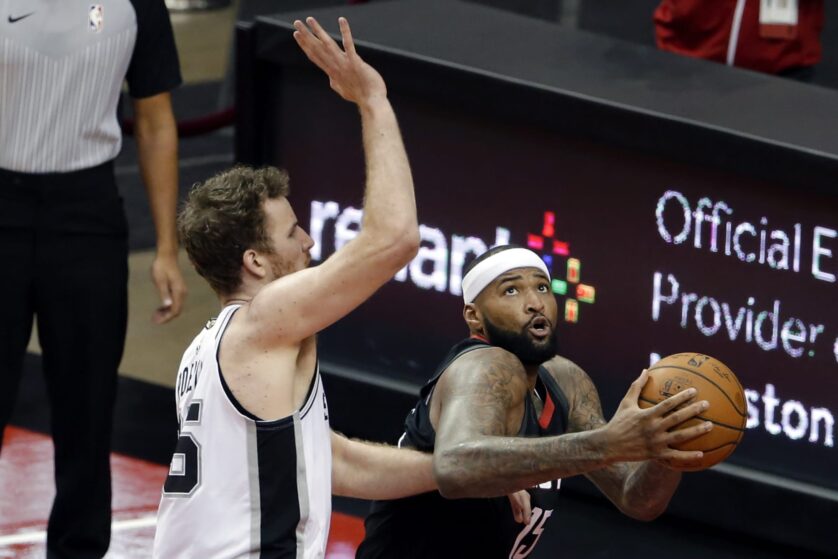 Like many of you, there was a time where I was pushing for the San Antonio Spurs to acquire DeMarcus Cousins pretty heavily. Even as recently last year I was in favor of the Spurs bringing Boogie in for a playoff push. But a lot has changed over the last 9 months, my stance on Cousins included.

After playing serviceably with the Houston Rockets up until this point, Cousins is parting with the Rockets to pursue other options. Shams Charania was the first to report that the two parties were splitting in order to allow the Rockets to go younger in the frontcourt while also rewarding Cousins for his solid play and professionalism by letting him choose where he spends the rest of his season.

Evidently, some of the Spurs fans who have previously wanted the team to go after Cousins still feel the same way today. It wasn’t long after the news broke that you started to see people suggesting that the Spurs should try to sign him. Here’s why that would be a mistake.

The biggest hurdle between a Spurs and Boogie union is that Cousins probably doesn’t want to sign with San Antonio in the first place. Early speculation is that he will end up with either the Lakers or Nets. Given the amount of Team USA connections Cousins has on both teams and their status as title contenders, the two coastal franchises are clearly the frontrunners to land the former All-Star.

But just for the sake of the argument, let’s say that Cousins was open to signing with San Antonio. Even if that was the case it still wouldn’t make sense for the Spurs to add him.

It’s similar to the argument that I made recently for why the Spurs shouldn’t be interested in Andre Drummond either. Cousins just isn’t demonstrably better than anyone the Spurs have in areas that they’re lacking right now.

The only frontcourt players the Spurs should be interested in right now are ones who can space the floor and open up more driving lanes for their guards and wings to exploit and those who can protect the rim at a high level when Jakob Poeltl sits. Cousins doesn’t fit into either of those camps.

Defense has never been the selling point of Boogie’s game. Recent injuries to his Achilles and ACL have sapped him of some of the athleticism that made him one of the most dominant big men in the game for much of the past decade. Together that’s made him more of a defensive liability than an intimidatior on that end of the floor.

As a floor spacer, Cousins would provide some value. He shot 33.6 percent from behind the arc in his 25 games in Houston which isn’t horrible for a big man who isn’t known for being a three-point threat but it’s not enough for it to be your main rationale for adding him to your team.

All in all, Cousins just isn’t what the Spurs need right now. And that’s completely fine. They’ve found ways to remain competitive and in the playoff hunt. If for some reason they miss the playoffs I highly doubt we’re going to look back and point to their decision not to pursue Cousins as the main reason for why that happened.

If we were back in 2018 I’d be all for this move. But it’s 2021 and the window for the San Antonio Spurs to smartly sign DeMarcus Cousins is long closed.