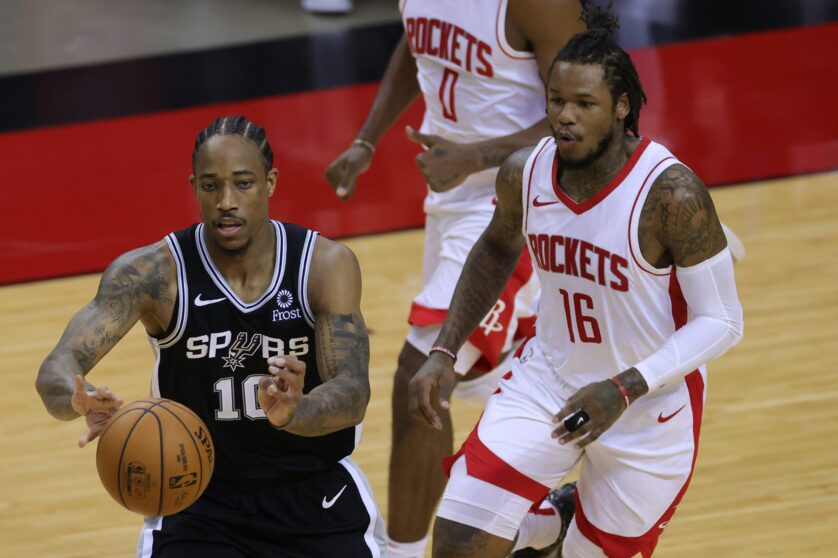 The San Antonio Spurs return home for back-to-back games against the Rockets to highlight their week four schedule. Here’s how I predict they’ll fare.

As the San Antonio Spurs look to begin their week by closing out a successful five-game road trip after starting 3-0, their chemistry seems to be growing more and more each day. After facing the defending champions three times in nine days, they’ve still fought their way to a 5-4 record heading into a four-game week.

LaMarcus Aldridge’s return has been a welcome sight for the team, who are now 5-1 with him back in the lineup. While he’s been a milder version of himself to start the season, his 28-point performance in which he nailed 3-of-7 from deep against the Lakers showed he still has plenty to offer.

Meanwhile, DeMar DeRozan is doing what we’ve grown accustomed to him doing — closing out ballgames. DeMar put the team on his back in game one against the Timberwolves on a night where the Spurs gave up 50-percent shooting from both the field and 3-point range.

Last week’s shining supporting cast featured a heavy dose of Patty Mills, Dejounte Murray, and Keldon Johnson — all of which made clutch plays on both ends of the floor to get San Antonio back above .500 for the season.

As will be the case all month, the Spurs will be playing every other day this week, beginning with a Sunday evening rematch with the Minnesota Timberwolves. They’ll then travel to Oklahoma City Tuesday before making their return to the AT&T Center for a two-game homestand against the Houston Rockets on Thursday and Saturday.

As San Antonio looks to get some separation from the .500 mark, here are my predictions for how they’ll do this week.

The Spurs are coming off a narrow 125-122 overtime victory over the Timberwolves, who shot lights out but coughed the ball up just enough for San Antonio to prevail. As was announced Sunday afternoon, DeMar DeRozan won’t be with the team due to flying to Los Angeles to tend to his ill father. Best wishes to him and his family as he deals with something more important than basketball.

Karl Anthony-Towns, meanwhile, who lit up the Spurs in his return to the court, didn’t look all that comfortable with his injury, stating after the game that he couldn’t really use his left hand. Things will undoubtedly look different from last night, so the biggest factor might come down to if KAT plays in this one as well.

If the Timberwolves want to protect their franchise guy, they should opt to rest him on the second night of a back-to-back after playing 37 minutes Saturday. Assuming this happens, I’m predicting another Spurs win, assuming Malik Beasley has come back down to earth.