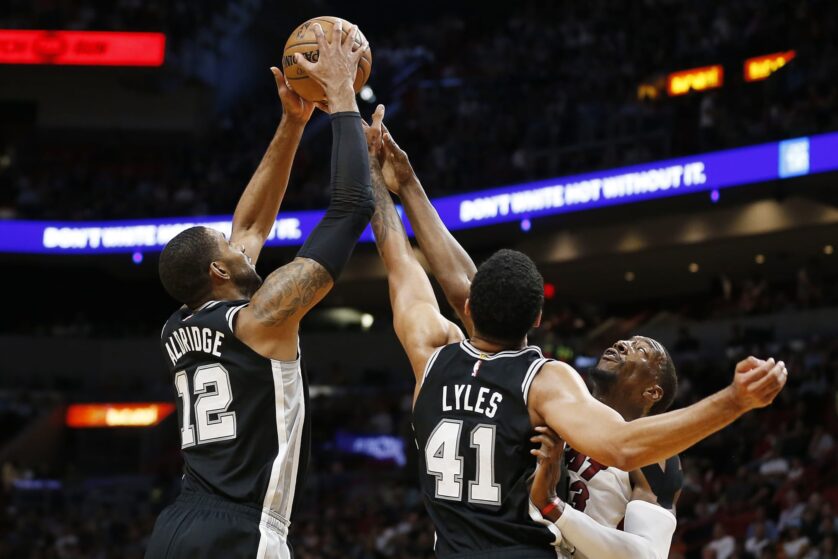 The San Antonio Spurs are playing well together as a team, but is it concerning that their guards are grabbing more boards than their big men?

The San Antonio Spurs are one of 10 teams with a .500 or better record early in the season, thanks in part to their historically good start taking care of the ball. Limiting turnovers and sharing the ball has been the name of the game so far, but things have been far from perfect in San Antonio.

The Spurs have been outrebounded in their last eight games and twice by double digits. In Minnesota on Sunday, they couldn’t overcome a 52-45 disadvantage on the glass, falling to the Timberwolves 96-88. In their loss to Utah, they gave up a whopping 57 boards while securing only 45 themselves.

So why has rebounding become an issue for the Spurs? To get to the bottom of this, let’s look at the production from the center and power forward positions compared to last season.

So far, only Jakob Poeltl is surpassing his rebounding rate from last season, with the other three dropping by an average of 1.3 rebounds per game collectively. Of course, Aldridge is playing four minutes per game fewer than last season, while Trey’s minutes have dropped by seven.

Should the San Antonio Spurs be worried?

The bigger picture to focus on here is how the team as a whole is performing on the glass. Despite their frontcourt shortcomings, the Spurs are still a respectable 11th in the NBA in total rebounds per game with 45.4. Last season, they finished 15th with an average of 44.6.

So how is San Antonio still near the top 10 in rebounding when two of their primary rebounders have dipped? The answer comes from their small forward and point guard positions — mainly Keldon Johnson and Dejounte Murray.

Johnson is currently leading the team in rebounds per game with 7.4, while Murray is right behind him with 7.2. DeMar DeRozan is also pitching in 5.6 boards per game. With all three being 6-6 or shorter, it’s clear the Spurs are covering up their frontcourt’s lack of production with team rebounding.

Is a style in which the smaller guys are leading the team in boards sustainable? It’s tough to know for sure. As a whole, the league is going smaller and quicker more and more each year.

Teams are also firing away from downtown at a higher rate, which results in long rebounds that frequently land in the hands of backcourt players.

When it comes to playing teams with intimidating height like the Los Angeles Lakers, the Spurs won’t be able to get away with their bigs being abused on the glass very often.

Against a team like the Houston Rockets, however, rebounding shouldn’t be as big an issue.

Overall, it’s great to see such production on the boards from some of the smaller guys on the team, but it’s hard to believe that will last all season. On top of that, San Antonio’s frontcourt not coming away with rebounds currently has the team at dead-last in total rebounds allowed per game at 50.4.

Could this be an early-season trend due to having to face the Lakers three times in their first 10 games? Possibly, but it’s still something to keep an eye on as the season continues.