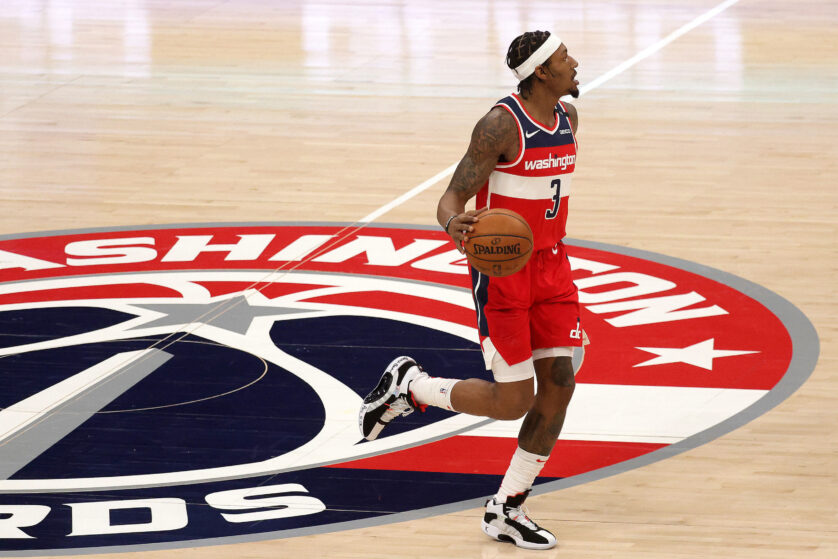 Dec 31, 2020; Washington, DC, USA; Bradley Beal #3 of the Washington Wizards dribbles the ball against the Chicago Bulls in the first half at Capital One Arena. Mandatory Credit: Rob Carr/Pool Photo-USA TODAY Sports

With James Harden officially a member of the Brooklyn Nets, the eyes of trade conspiracy theorists everywhere are solely focused on Bradley Beal. The Washington Wizards star is one of the best players in the league stuck on one of the worst teams. Could the San Antonio Spurs swoop in the save him?

In preparation for an article he published on The Ringer, Kevin O’Connor spoke to 14 front office executives about which teams come to mind as a sleeper in the hunt for Beal. The San Antonio Spurs were one of the team’s mentioned.

San Antonio’s legendary avoidance of trades would seemingly preclude them from any deal of this magnitude but frankly, the timing couldn’t be better for the Spurs to make a move.

The Spurs have a great group of young players who have impressed us this season but the one thing that this group seems to be missing is a true superstar who can take them over the top. At times, Keldon Johnson and Lonnie Walker have looked like they could grow into consistent 20+ points per game scorers. But why settle for uncertainty when the real thing is waiting for you in Washington?

Spurs players and coaches have made it clear that returning to the playoffs isn’t just the goal, it’s the expectation. If San Antonio wants to make that a near certainty, trading for Bradley Beal is certainly one way to make that happen.

Let’s explore what the Spurs would likely have to give up to acquire Beal and what they could look like if they brought this misplaced star to the Alamo City.