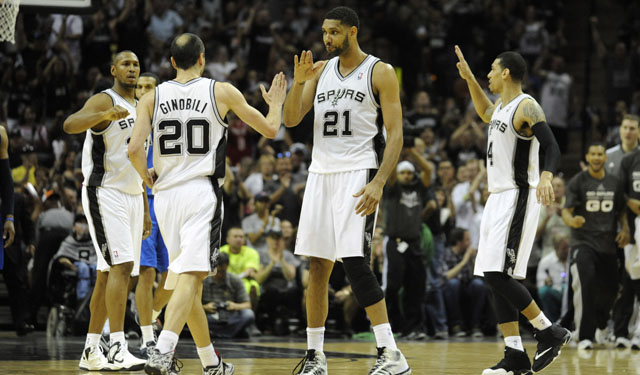 The question for San Antonio Spurs fans before the season even starts is how good will the team be? The answer is a collective ” The Best Team In The NBA” when you factor in the re-signing of key veteran players with the addition of LaMarcus Aldridge and David West. The San Antonio Spurs are tops in the NBA and finally the media is recognizing our teams greatness. Take a look at our second starting five David West, Manu Ginobili,Patty Mills, Boris Diaw, and Kyle Anderson. This second team is a starting five anywhere in the NBA and makes the playoffs in the Western and Eastern Conference. When you factor in the starting lineup of Tim Duncan, Tony Parker, LaMarcus Aldridge, Kawhi Leonard and Danny Green the Spurs are a scary team. Even teams like the Cavs, Dallas, Houston, Miami and the Lakers tried to steal LaMarcus from the Spurs because they knew if he became a Spur it was game over.  While the Golden State Warriors are still basking in the glow as the Champs the Spurs have constructed a monster of a team.  The San Antonio Spurs are in position to make history once again and make a run for their sixth NBA championship this season. While the rest of the NBA can only try and emulate what the Spurs do so well and that’s be a first class organization.

Spurs The Best Team In The NBA?