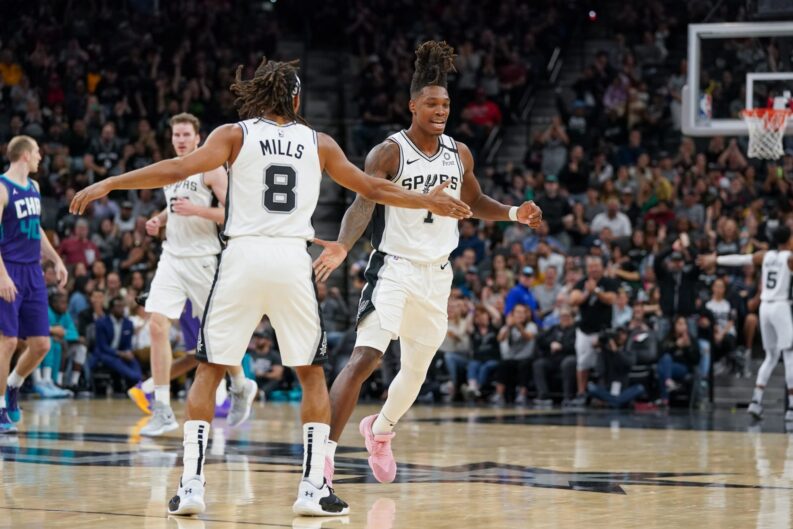 They haven’t made any splashy moves but make no mistake, the San Antonio Spurs are quietly having themselves a pretty impressive offseason.

Popovich and the front office started out by nailing both of their draft-night selections. Some fans might be upset that the team didn’t move up to the top of the draft to select someone like Deni Avdija or James Wiseman but the Spurs played their game, bided their time, and walked away from the draft with two excellent players who should be able to help right away.

Their free agency moves, while not eye-popping or particularly unexpected, checked most of the major key benchmarks for the offseason. They fully guaranteed Trey Lyles‘s deal, brought back Jakob Poeltl and Drew Eubanks, and decided to let Bryn Forbes walk. All in all, not a bad offseason so far.

All of this sets up the San Antonio Spurs to be a similar team to who they were last year, at least in the starting lineup. The second unit could be a very different story.

During the height of their domination of the Western Conference, the San Antonio Spurs consistently rolled out one of the best second units in the league. While other teams might have been satisfied with their bench players holding the position set up by the starters, the Spurs regularly looked to their bench unit to blow leads wide open.

The Spurs second unit wasn’t bad by any stretch this year – they ranked 8th in the league in total plus-minus which is nothing to be ashamed of – but it wasn’t quite up to the standards that have been set by teams of previous years.

You’d have to go all the way back to the ’08-09 season to find a year where the San Antonio Spurs didn’t finish the year with a top-five bench unit in terms of total plus-minus. But there’s good reason to believe that they can get back to that level this year.

Assuming that Derrick White keeps his role in the starting lineup, it’ll probably be Patty Mills running the second unit this season. And we couldn’t think of a better veteran leader to spearhead what should be an otherwise fairly young bench group.

Lonnie Walker, Keldon Johnson, and Devin Vassell should all play fairly sizeable roles from the get-go. I couldn’t be more excited to see what that trio can do.

Keldon is coming off of a stellar finish to his rookie season. He was shooting lights out in the bubble but don’t think that he’s let that slow his drive at all. He probably won’t shoot 64.7 percent from behind the arc as he did in Orlando but if he gets a similar amount of playing time to what he saw over the final eight games he should be a real difference-maker for San Antonio.

Keldon isn’t the only young Spur who came into his own last year. After being stuck on the bench for much of the first few weeks of the season, Lonnie Walker started to break out towards the end of the season. He forced his way into the rotation with his impressive play and after the All-Star break, he really started to cook.

After the break, Lonnie started to stroke it from deep. He’d always been known more for his athleticism and contortionist finishes but it’s his shooting ability that stood out over the final few weeks.

He was hitting an impressive 43.6 percent of his long-range attempts after the break, a mark that, if sustained across a full season, would have put him firmly in the top-ten most accurate 3-point shooters in the league.

Additionally, the Spurs were 5-0 in games where Lonnie took at least five triples. Whether he’s starting or coming off the bench, good things happen when the Spurs get Lonnie involved. Would it be too bold to say that he could contend for a Sixth Man of the Year award this year if things go his way? I don’t think so.

Rounding out the Spurs three-headed Hydra of second unit wings is the newcomer, Devin Vassell. The impressive rookie is a proven 3-point shooter and a destructive defender. It’ll be interesting to see exactly what his role looks like but this is not a player who needs to spend time in Austin and Brian Wright’s comments after draft night make it seem like the team will look to get him involved early.

And we haven’t even mentioned the man in the middle – Jakob Poeltl. It’ll be interesting to see who ends up getting the starting spot alongside LaMarcus Aldridge but if last year is any indicator of what Pop values in his starting lineup it’ll be Trey Lyles.

That’s not a knock on Poeltl by any means but Lyles spaces the floor and he doesn’t. And any starting lineup featuring Dejounte Murray and DeMar DeRozan needs all the floor spacing it can get.

This likely pushes Poeltl to the bench. Not an ideal situation for a player who has been vocal about his desire for a larger role but it’s one he should thrive in. He’s quietly grown into one of the most impressive young rim protectors in the league and, with Johnson and Vassell holding down the wings, should help make the Spurs bench one of the best defensive second units in the league.

Finally, we can’t talk about the Spurs bench mob without mentioning Rudy Gay. He’s entering the final year of his deal with San Antonio and will likely be a name to watch near the trade deadline but he should still be a key player for the second unit.

He averaged 17.6 points and 5.9 boards per game over his final ten games on 47.8 percent from the field and 40.4 percent from deep. He even showed an ability to step into a very small ball center role at times which, given all of the wings and guards the Spurs suddenly have, could be something worth exploring a little more.

With Patty running point, Walker, Johnson, and Vassell holding down the perimeter, and Rudy and Jakob locking down the paint the San Antonio Spurs bench unit is primed for a resurgent season.

Next: 25 players you may have forgotten were on the Spurs

They might not have the star power to compete with the top teams in the Western Conference but San Antonio Spurs fans should be able to look forward to seeing the bench mob return to their place among the most dangerous units in the league this year.