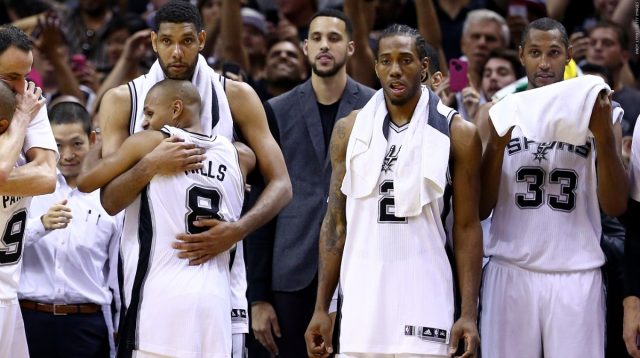 A Look At A Season Of Change.

A San Antonio Spurs team in transition is enduring a panicking fan base accustomed to the members of the 2014 championship team, but the summer of 2016 is mostly a period of changes that the team has seen before.

Antonio Daniels. Jaren Jackson. Will Perdue. Do those names mean anything to you? If so, you’ve been a San Antonio Spurs fan since at least the first championship.

If you don’t recognize those names, here are some that might be a little more familiar: Avery Johnson, Sean Elliott, Steve Kerr, Malik Rose, David Robinson andTim Duncan.

At least one of those names should stand out to you, since Tim Duncan’s still holding the team together as of this writing.

Those other names? Malik Rose went on to one more championship with Timmy. David Robinson established the character of the San Antonio Spurs. Avery Johnson and Sean Elliott formed the first championship core and have their jerseys hanging in the rafters of the SBC Center. Steve Kerr’s gone on to be a formidable coach at the head of a deadly Golden State Warriors team.

What you’ll notice is that only one man, Duncan, is still standing. He was the youngest of that group, a second-year player with a chip on his shoulder but a quiet demeanor that hid his passion. He’d go on to anchor a 2003 championship team with two players by his side that all San Antonio fans still know today: Tony Parker and Manu Ginobili. The rest of the guys around him though?

David Robinson retired that year. Stephen Jackson went on to make money elsewhere and have one of the realest Twitter accounts on the planet. Speedy Claxton, who some Spurs fans were calling for as a Tony Parker replacement, isn’t even in the league anymore, though he’s taken a respectable position on the basketball staff at Hofstra University……Read More

Source: San Antonio Spurs: A Look At A Season Of Change