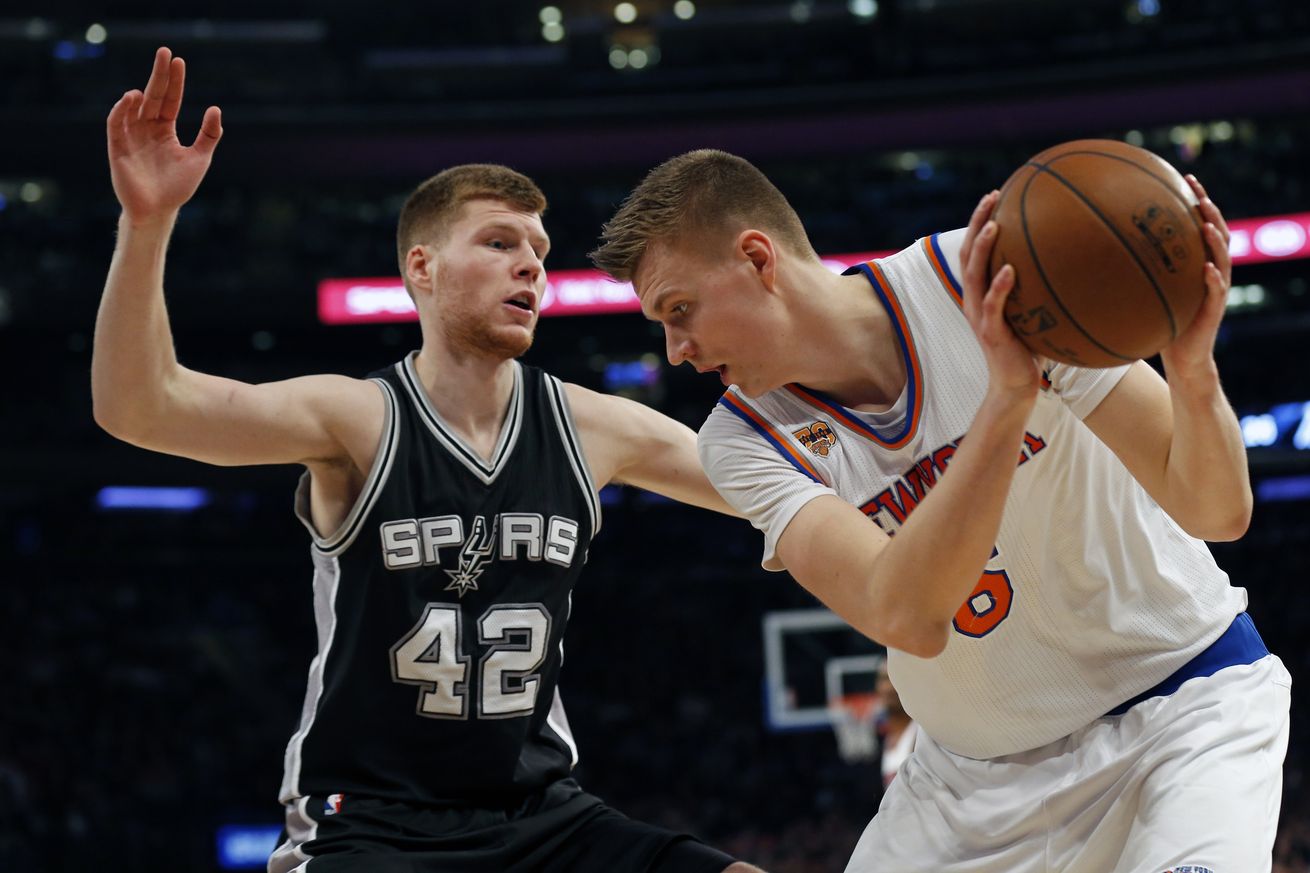 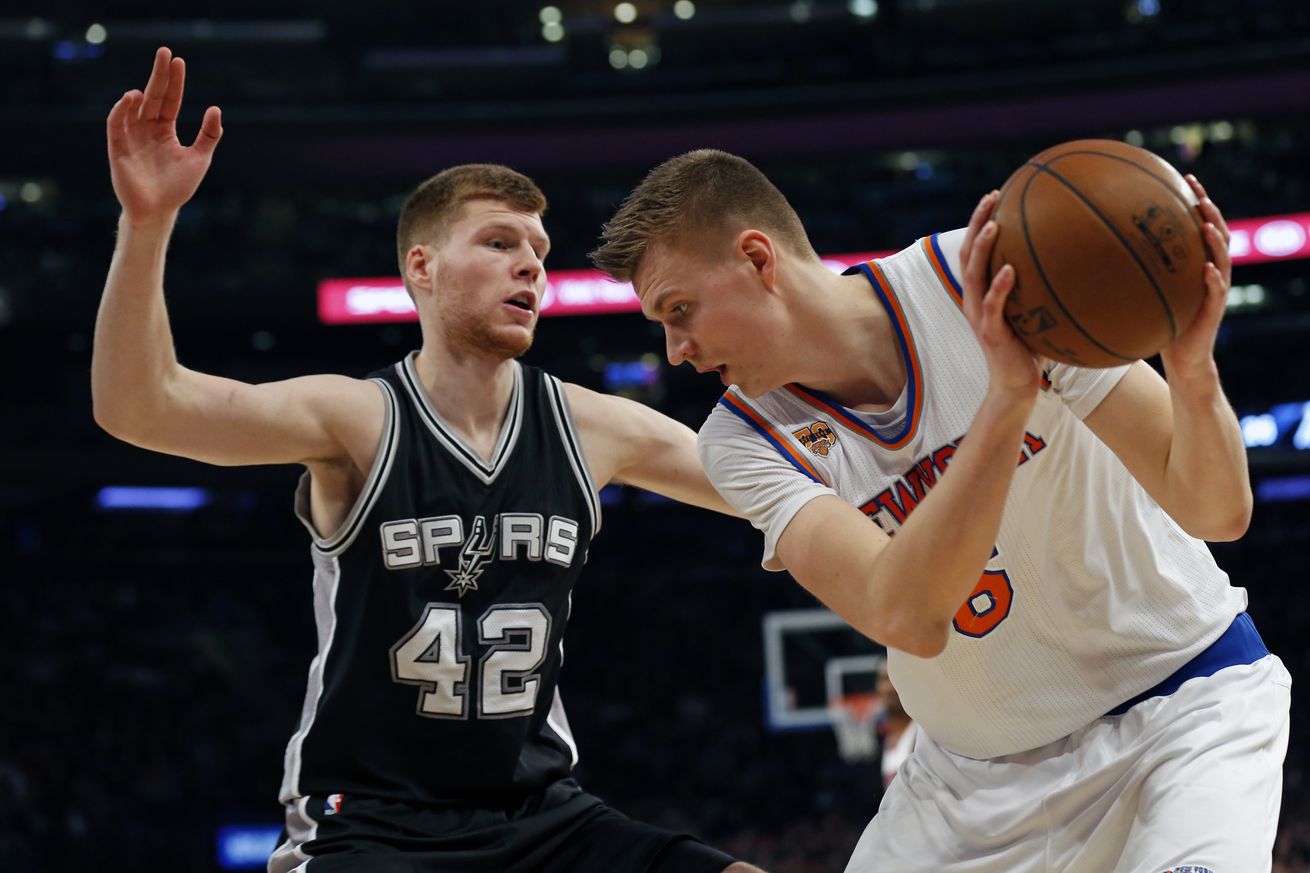 The Spurs had their worst shooting night of the year and lost a close one to the Knicks.

The Spurs shot just 36% from the field and were again doomed by a poor third quarter, losing to the Knicks 94-90. Kawhi Leonard scored 36 points, but he didn’t receive much help as the Spurs offense was stuck in mud for most of the night. Here is how it all went down.

The Spurs opened up the game with some cold shooting. The wing combo of Leonard and Green started 2-8 combined, with Kawhi’s lone make a midrange jumper and Green’s a wide open “Tar Heel Triple.” The Spurs were able to get decent looks though, and the hustle of LaMarcus Aldridge and Dewayne Dedmon on the boards kept the game close early. The Spurs defense, which by design limits opposing looks at the rim and the three point line, conceded some midrange looks to the Knicks early, but soon clamped down, forcing 9 turnovers leading to 11 points. Kyle Anderson had a particularly nice and-one bank shot after an open court Euro-step. The Spurs led 21-18 after the first quarter.

Notable first quarter stat: Thanks to those turnovers and 9 offensive rebounds, the Spurs attempted 27 field goals (33.3%) in the first quarter to the Knicks’ 12 (58.3%).

The Spurs allowed an 8-5 mini-run to start the second quarter, prompting a timeout from Coach Popovich. Soon after, Kawhi came back in the game and began to dominate. At one point the All-Star rattled off 8 consecutive points for the Spurs, propelling them to a 12-point lead. Some sloppy defense from San Antonio allowed the Knicks to close the gap to 6 by halftime, as Rose took advantage of his athleticism and some late defensive rotations from the Spurs. Even with the lackluster finish to the half, the Spurs grew their lead in the second period and went to the locker room up 48-42.

Two straight possessions in the paint from #Kawhi, a jump hook and an assist to Dedmon for a dunk. pic.twitter.com/xXzF0eMixM

The Spurs had a hangover from the second quarter as they allowed New York to go on a 9-0 run to start the third. That made it 15 straight for the Knicks, dating back to the first half. Pop yanked Leonard less than three minutes into the third, and after some quick coaching put him back in the game. Leonard stopped the bleeding with a jumper and David Lee got three tough buckets to go, but not much else was going right for San Antonio. The Spurs failed to force a turnover in the third, and the Knicks took the quarter 27-17 and led 69-65.

Manu with the mid-air dime… pic.twitter.com/C7bIvUnIfe

The sloppy play continued into the final quarter, as neither team was able to mount much of an offense. On offense, the Spurs let the ball stick way too much, and when they did get open looks they weren’t able to convert very often. Leonard gave his best effort, scoring 15 in the final quarter, but there wasn’t enough help around him. Kawhi forced a turnover with the Spurs down 4 and 27 seconds remaining, but they weren’t able to convert and the game was effectively over. Give credit to the Knicks, who were very active on defense, but the Spurs looked lethargic almost the entire game and weren’t able to find enough energy down the stretch.

Notable fourth quarter stat: Carmelo Anthony, quiet for most of the game, scored 10 of his 25 points in the final quarter, including some huge buckets in crunch time. He also had 11 in the third.

Up next for the Spurs: a short turnaround, as they travel to Indianapolis to face Paul George and the Pacers tomorrow evening.