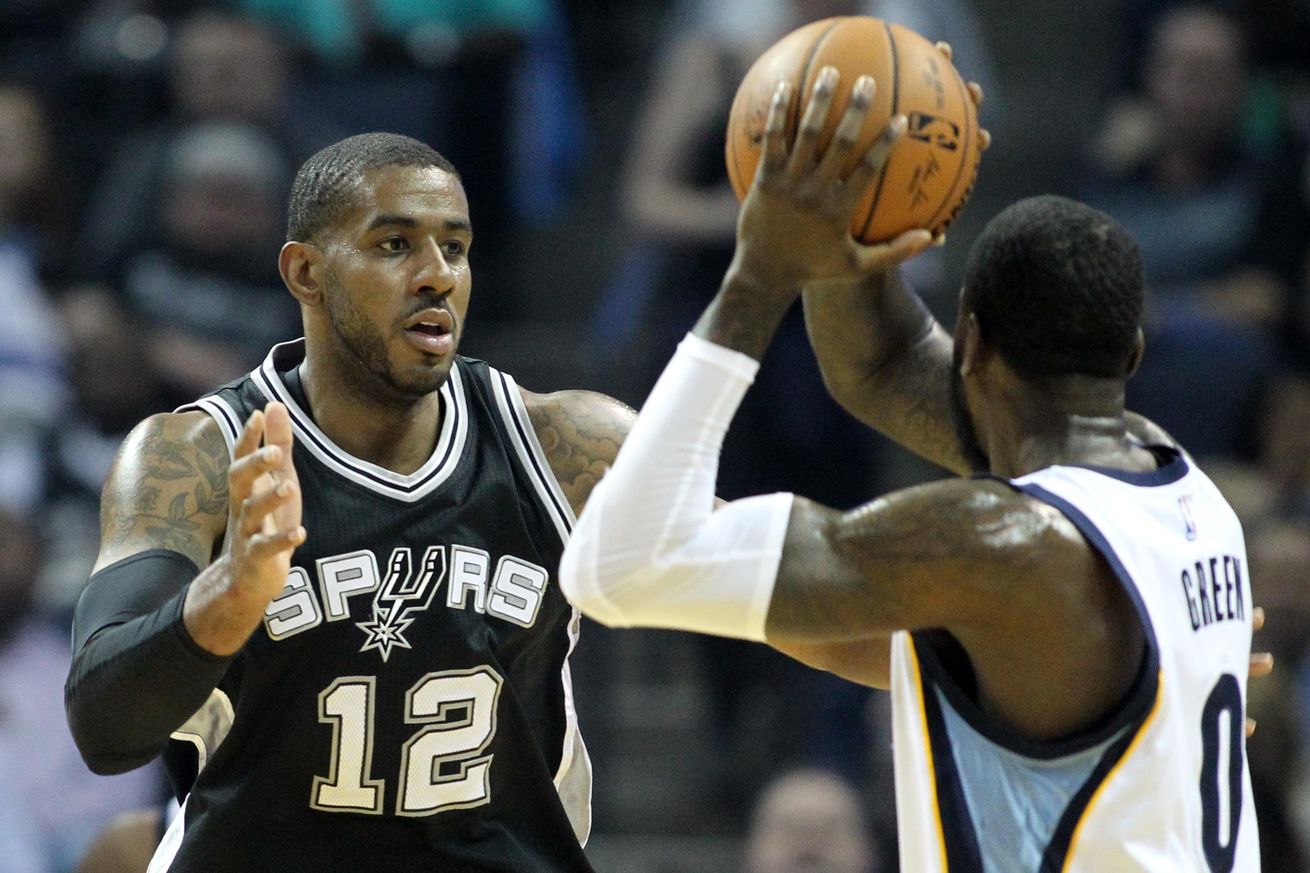 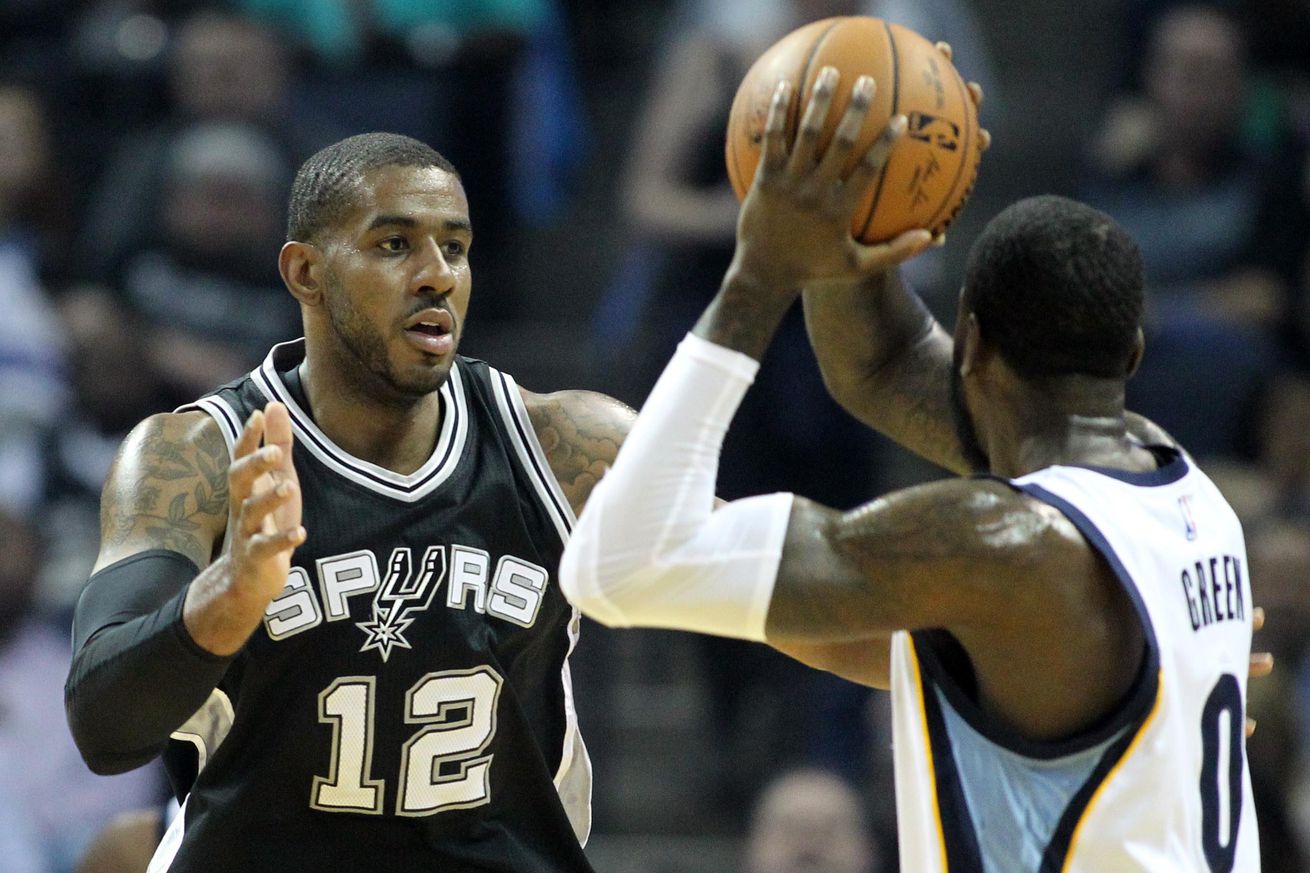 The Spurs traveled to Memphis for the first of three meetings over 17 days against their division rivals and potential first-round playoff opponent. It was a back-and-forth, streaky game, but the Grizzzlies morphed into the Houston Rockets for a night by uncharacteristically hitting 13 three-pointers and getting to the free throw line at will to beat the Spurs despite a good game from LaMarcus Aldridge (21 points, 9 reb, 4 assists) and domination on the boards.

The game started as a defensive slug-fest with both teams struggling to get open looks or even hold onto the ball. By the midway point in the first quarter the Spurs were up 10-8 with the teams shooting a combined 7-21. LaMarcus Aldrdige hit two straight shots out of a timeout, but the Grizzlies went on a 12-0 run to gain a 22-14 lead before another Aldridge make temporarily stopped the bleeding. Memphis’ onslaught from the field continued, and they led 29-18 at the end of the quarter largely on the back of 4 three pointers vs. none for the Spurs.

Patty Mills hit a three to start the second quarter, and the Spurs scored the first eleven points to tie things up on a Dewayne Dedmon alley-oop dunk from Parker. From there it was a comedy of errors for both teams, with errant passes, odd deflections (*see below), and travels taking over. The entire quarter was sloppy, but the Spurs managed to outscore Memphis 25-15 to get within one, 43-44, at the half. Although the Spurs shot better overall in the half and made four more field goals, Memphis uncharacteristically built its lead on threes (6-15) and free throws (10-13), compared to 3-14 and 4-4 (respectively) for the Spurs.

Aldridge came out of the half with aggression and kept the Spurs in it with their first five points of the quarter. It was a good thing too, because everything was going right for Memphis with 50-50 balls (and calls) constantly going their way. An open three for JaMychal Green with 7:31 left got the lead to 57-50 and led to a Spurs timeout. Aldridge and Pau Gasol responded with jumpers, and the Spurs got going again, eventually tying things back up at 61 apiece. Memphis responded with 7-0 run, but the Spurs fought back to within two, 73-75, entering the final frame.

Memphis scored five quick points to open the fourth quarter, and Pop called a quick timeout just over a minute in. The Spurs had trouble keeping up as Memphis continued to hit shots and get to the line, getting the lead as high as nine. Some threes finally started falling for the Spurs, with one each from Jonathon Simmons, Kawhi Leonard, and Davis Bertans getting them back within three, 84-87, with 6:58 left. The Grizzlies once again responded, this time getting lead back to double digits with 2:30 left. The Spurs couldn’t buy any kind of break down the stretch with the Grizzlies constantly getting to the line on ticky-tack calls and shots rattling out, and they went on to lose 104-96.

Check back later for more on this one. It’s a quick turnaround as the Spurs return to San Antonio tomorrow for a 6PM tip-off against the Kings.