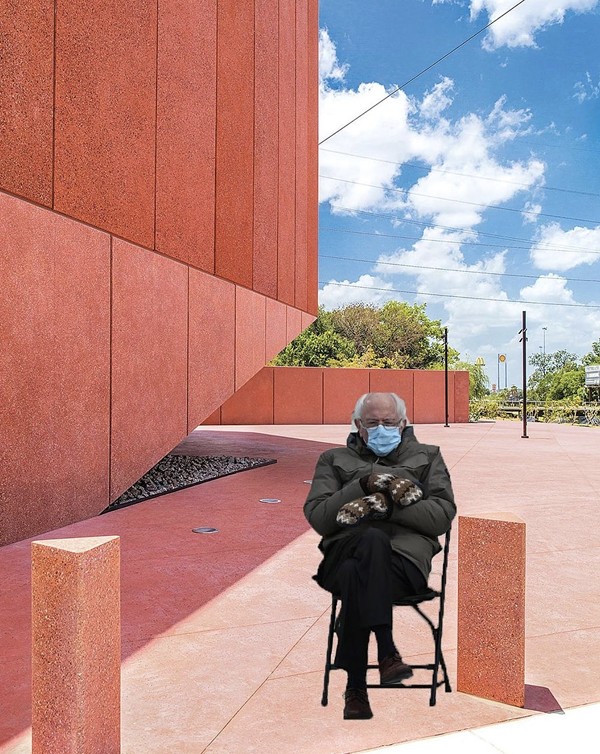 Wednesday’s presidential inauguration was a momentous occasion, but leave it to Sen. Bernie Sanders to steal the show without doing much at all.

A photo of the Vermont independent seated in the audience of the inauguration went massively viral, spawning a slew of memes across social media, in which he was photoshopped into everything from Mario Kart to the new Marvel show WandaVision (that one was tweeted by series star Paul Bettany, btw).

In Jewish yoga this pose is: waiting for my wife at Loehmann’s pic.twitter.com/Qik7wsZ0ad

San Antonio wasn’t about to be left out of the action, though. Several local orgs tweeted their own versions of the meme, shouting out iconic landmarks while they were at it.

Ruby City posted a photo of its award-winning building with Sanders sitting out front with the caption, “Waiting for the pandemic to be over so I can visit Ruby City like…”

Due to the aforementioned pandemic, the contemporary art center has been closed to the public since last March. However, locals can still enjoy the building’s Instagrammable architecture from the outside, which Ruby City acknowledged in a follow-up tweet.

Waiting for the pandemic to be over so I can visit Ruby City like… #BernieSanders pic.twitter.com/L5FcD73oxi

On Instagram, Broadway News imagined Sanders waiting for bagels at Wild Barley Kitchen Co., while local handbag line Breakfast Friend used him to hype up its next merch drop.

Bernie also cropped up at other SA establishments, including Little Death and Best Quality Daughter, and he was spotted sitting in on some outdoor education at Trinity University.

But, of course, we could never forget the Alamo! Thanks to the ingenuity of software engineer Nick Sawhney, who made a website that lets you put Sanders just about anywhere captured on Google Street View, Bernie visited San Antonio’s historic landmark too.