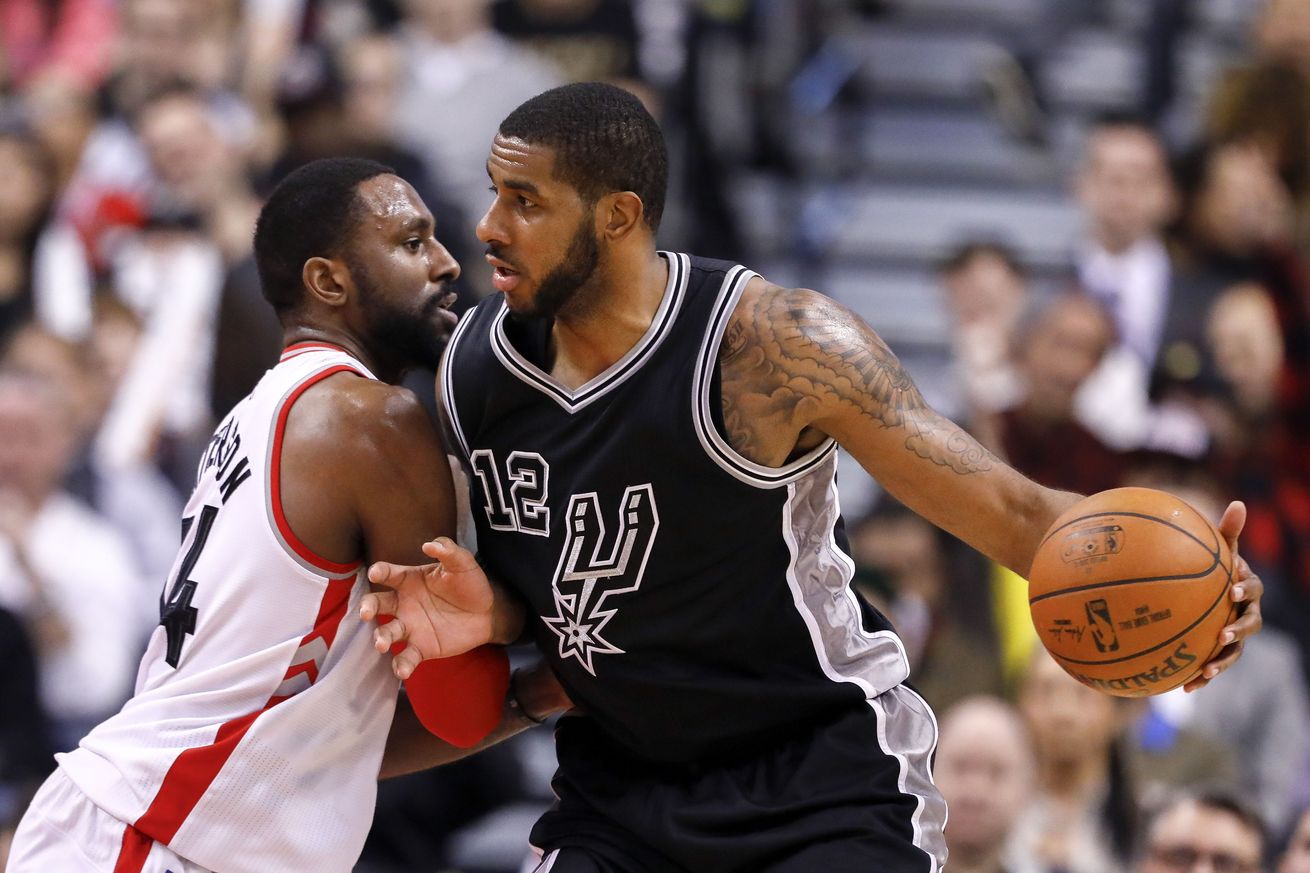 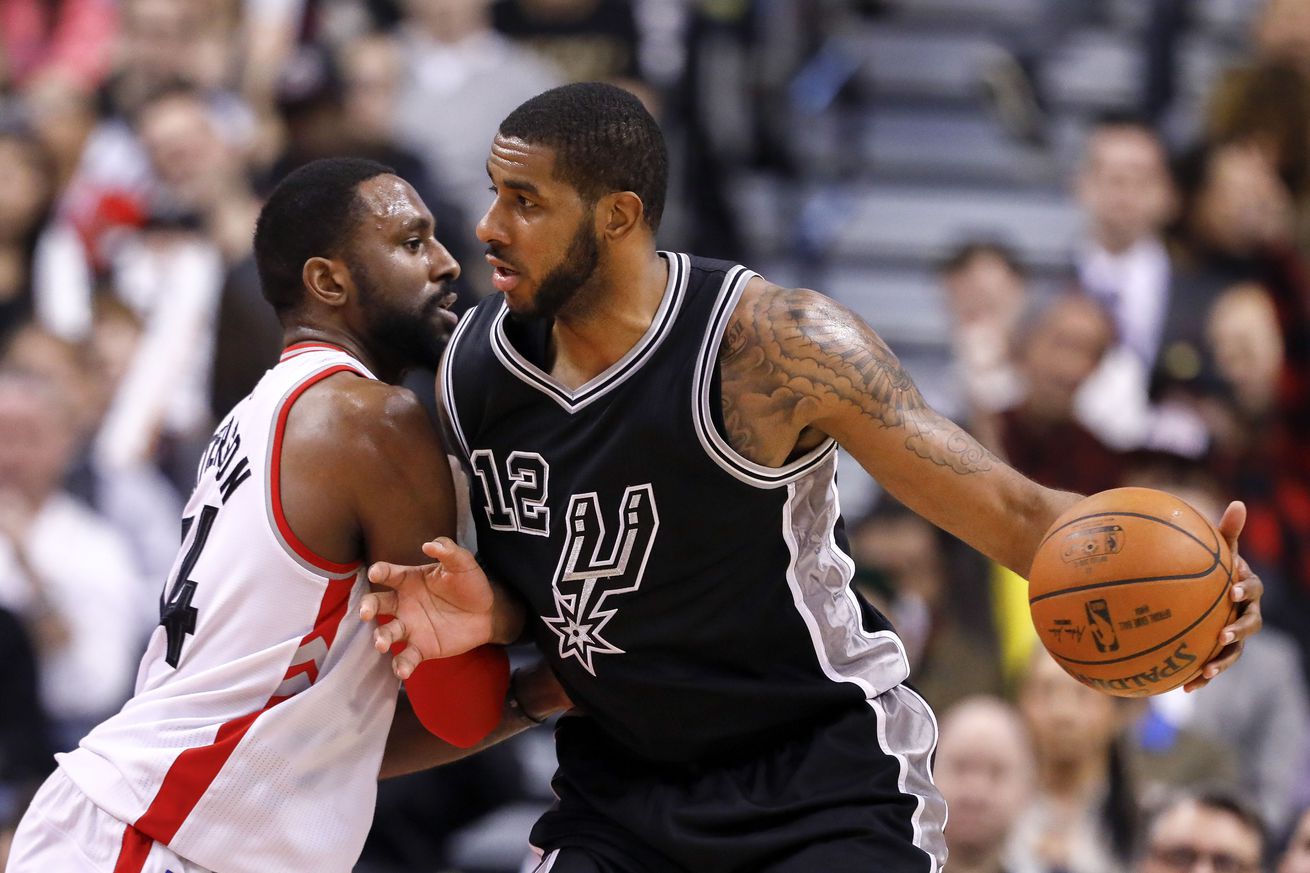 Dejounte Murray’s basket in the final 90 seconds gave the Spurs the margin they needed.

San Antonio’s hero Tuesday night was the rookie who just weeks ago wasn’t sure where he would play his next game — San Antonio or Austin, in the D-League.

But Dejounte Murray, facing Toronto on the road and starting again in the injured Tony Parker’s place, lofted a high floater to hand the Spurs a 106-104 lead with 1:29 in a frenzied Air Canada Centre.

The Spurs used Murray’s shot and a rebound and free throws from forward Lamarcus Aldridge in the final seconds to close out a 108-106 win over the Raptors.

The Spurs move to 36-9 with the win, including 20-4 on the road. Murray tallied 11 points in the win, but it was Aldridge, with 21 points, and guard Patty Mills, with 18, who helped San Antonio to the win.

The Spurs did it all without the injured Parker, Pau Gasol, Kawhi Leonard and Jonathon Simmons, too — only proving the worth of the reserves the San Antonio faithful bill as the “Juice Unit.”

The fourth-quarter theatrics were unrelenting, but things began to escalate when Aldridge converted on an and-1 with 3 1/2 minutes to go. The free throw tied the game at 104, and after several missed shots from both sides, Murray, assisted by Aldridge on the play, lobbed the eventual game-winner through the nylon.

Toronto’s Terrence Ross missed a pair of 3-pointers soon after to erase any chance the Raptors had at making up ground.

The first quarter saw San Antonio race out to an 8-2 start behind a trio of baskets from Lee. The Raptors, though dry — they started shooting 1-for-7 — staged their mini-comeback from the free throw line, hitting each of their nine attempts from the stripe. Raptors guard Kyle Lowry tallied 11 points in the first frame alone, keeping his team in it when the shots weren’t falling.

The Spurs squeezed off a quick 5-0 spurt and widened their lead to 27-19 behind a 3-pointer from Bertans and a Mills layup, but Toronto sandwiched baskets around a Bertans jumper. San Antonio took a 29-25 lead into the second stanza.

The Spurs then added to what in the first frame appeared to be an offensive outing difficult to top, and they did it largely via the reserves. Guard Manu Ginobili tallied two quick jumpers, the first a 3-pointer and the second a deep jumper that lifted the visitors to a 36-27 lead. After some basket-swapping the Spurs saw their lead whittled to 38-32, prompting an immediate timeout from coach Gregg Popovich.

But things didn’t improve for San Antonio — defensively, at least — out of the timeout. Forced to play rookie Bryn Forbes as his team battles injuries, Popovich saw Forbes shed his warmup gear and almost immediately foul Lowry beyond the arc. The Raptors guard sank 2 of the 3 resulting free throws, and Toronto clawed to within 38-34.

Aldridge responded with a patented mid-range jumper, but the Raptors got baskets from Patrick Patterson and Lucas Noguiera to scrap within 40-38. Lowry later hit a pair of free throws before the Spurs rattled off seven unanswered, though, pulling ahead at 51-40.

Lee ballooned his team’s lead to 10 with a free throw, and the margin hovered around there for much of the remainder of the second period. But Patterson canned a 3-ball and Noguiera flushed one to end the quarter.

The third frame would set the stage for the dramatic fourth, but not before Anderson scored to hand the Spurs a 10-point lead, at 66-56. But that’s when San Antonio began its unraveling.

Toronto ripped off a 6-0 run to pull within four, and Ginobili temporarily halted the bleeding with a jumper, but the Raptors responded with a short basket from Lowry and a Ross and-1, the latter of which trimmed the Spurs’ lead to 70-68. But the home team wasn’t finished.

Instead, guard Corey Joseph laid one in to tie things at 70 apiece, parrying all on his lonesome baskets from the Spurs. His third straight bucket secured for Toronto a 75-74 advantage.

The final two minutes of the quarter saw much of the same, as both teams wrestled the lead from each other and back again. The Spurs and Raptors trotted into the last 12 minutes deadlocked at 79 each.

The rest was, in a word, hectic. Lowry totaled a game-best 30 points in his team’s loss.

The Spurs return to action Friday at New Orleans.