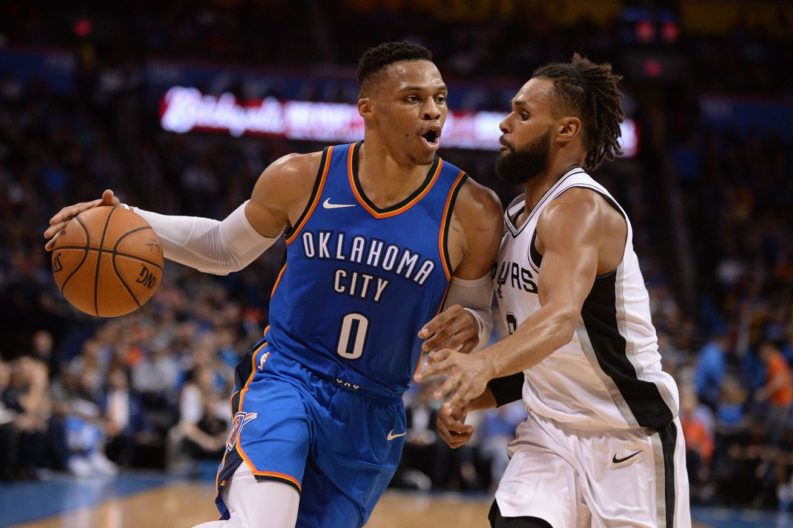 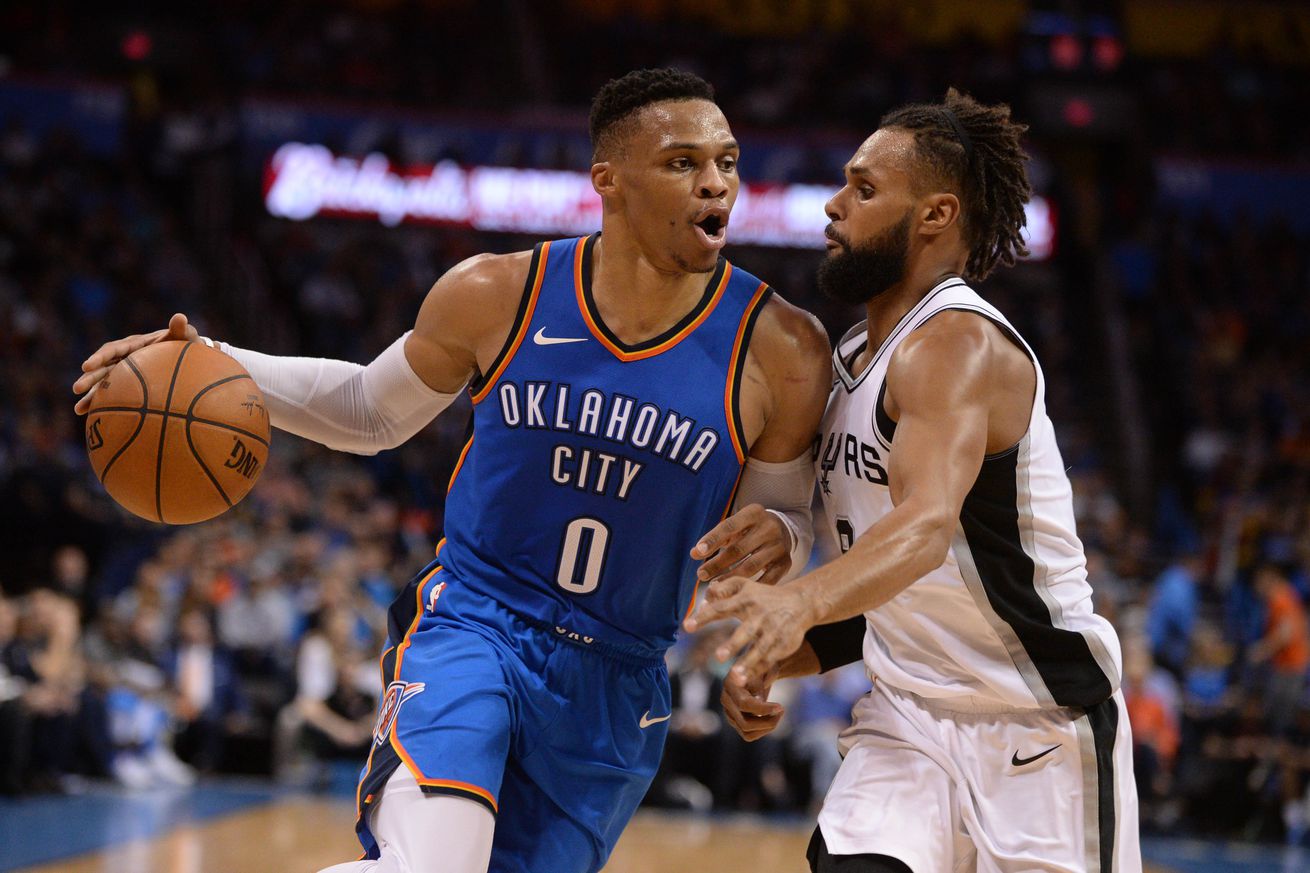 In order to beat a good team like the Thunder without their best player, the Spurs need great production from LaMarcus Aldridge, and tonight he was stymied by the Thunder’s aggressive double teams and harassing defense. He’s been the best player for the Spurs all year, but tonight he couldn’t carry the team, and no one else was able to step up. The Thunder got good production from their bench players and Russell Westbrook put in his typical game, he got to every loose ball as OKC won easily with a surprise contribution from 37 year old Nick Collison who was forced into action after Steven Adams sprained his ankle. The Spurs bench made the final score look a little more respectable with a late surge, but the Thunder took the game easily.

Pau Gasol was a surprise starter for the Spurs, after he was announced as questionable earlier in the week. Steven Adams opened the scoring by getting a layup over him followed by Cory Brewer’s hoop to put the Thunder up by 4. Gasol answered a few minutes later with a straight on triple, and that was all of the scoring for a while as both teams had trouble putting the ball in the basket. The Thunder began to hit their three point shots, though, while the Spurs got into the paint and they tied it up at 12 with 5 minutes left. The Spurs went to an over-30 lineup late in the quarter with Danny Green being the youngest player on the floor for the Spurs, and the Thunder took advantage and led 24-19 after one quarter. It could have been worse, as a desperation heave from Raymond Felton barely missed giving OKC an 8 point lead.

The teams played pretty evenly to start the second quarter, with Rudy Gay providing scoring for the Silver and Black, but the Thunder hustled to loose balls and got second chance points to surge ahead, and with Alex Abrines hitting shots Josh Huestis drive and dunk, the Thunder led 41-30 halfway through the quarter. LaMarcus Aldridge finally hit a shot for the Spurs, but the Thunder’s hot shooting continued as they extended the lead to 14. The Spurs continued to fight, and Davis Bertans hit some deep threes late to cut the Thunder lead to five with 20 seconds left in the half. Unfortunately, a bad foul by Tony Parker sent Westbrook to the foul line, and poor rebounding on a missed free throw cost the Spurs dearly as the Thunder scored the last 4 points of the quarter and led 52-43 at the half.

The Thunder got an easy basket from Adams to start the second half, and Aldridge quickly answered. The bad sign for the Spurs was that Westbrook started to show signs of life, and the harassing defense on Aldridge continued to stymie him. Nevertheless, the Spurs were able to stay within reach early in the quarter, trailing by 10 after four minutes. Finally the Spurs started to get some rhythm on offense with Kyle Anderson using his patience to get all the way to the basket, and Aldridge fighting his way through a double team to bring the Spur back to within four with 5 minutes left in the third. The superior energy of Russ Westbrook and the Thunder propelled the lead back up to double digits late in the quarter, mostly with Jerami Grant free throws from Bertans fouls. The Thunder led by 9 at the end of the quarter, the same margin they led by at halftime—77-68.

Patrick Patterson opened the final quarter with a triple for the Thunder to up their lead to a dozen early in the fourth. Nick Collison, who hasn’t played much this year, provided a lift for the Thunder with a baskets inside and a pair of free throws as they stretched the lead to 20 halfway through the final quarter. Bryn Forbes made his first appearance and hit a couple of shots, and Bertans scored 6 quick points to cut the lead to 10 with just under 4 minutes left. Russ hit a shot, but Forbes and Joffrey Lauvergne came back at them and the lead was 7 with 2 minutes left. That was the high water mark, a pair of freebies from Brewer and a Grant triple assisted by Westbrook pushed the lead back to 12 with a minute left. The Thunder closed out the last minute and won 104-94.

Let’s let Tom Jones make this out of bounds call:

The Spurs are now 37-29 on the season and they are in 7th place in the Western Conference, with a looming danger of missing the playoffs. The Spurs continue their tough road trip as they travel to Houston to face the Rockets on Monday at 7:00pm. The Rox lost their first game in a while last night against the Toronto Raptors. James Harden, Chris Paul and the gang will be revved up to stay ahead of the Warriors for the best record in the league, and it will be another tough test for the Silver and Black.