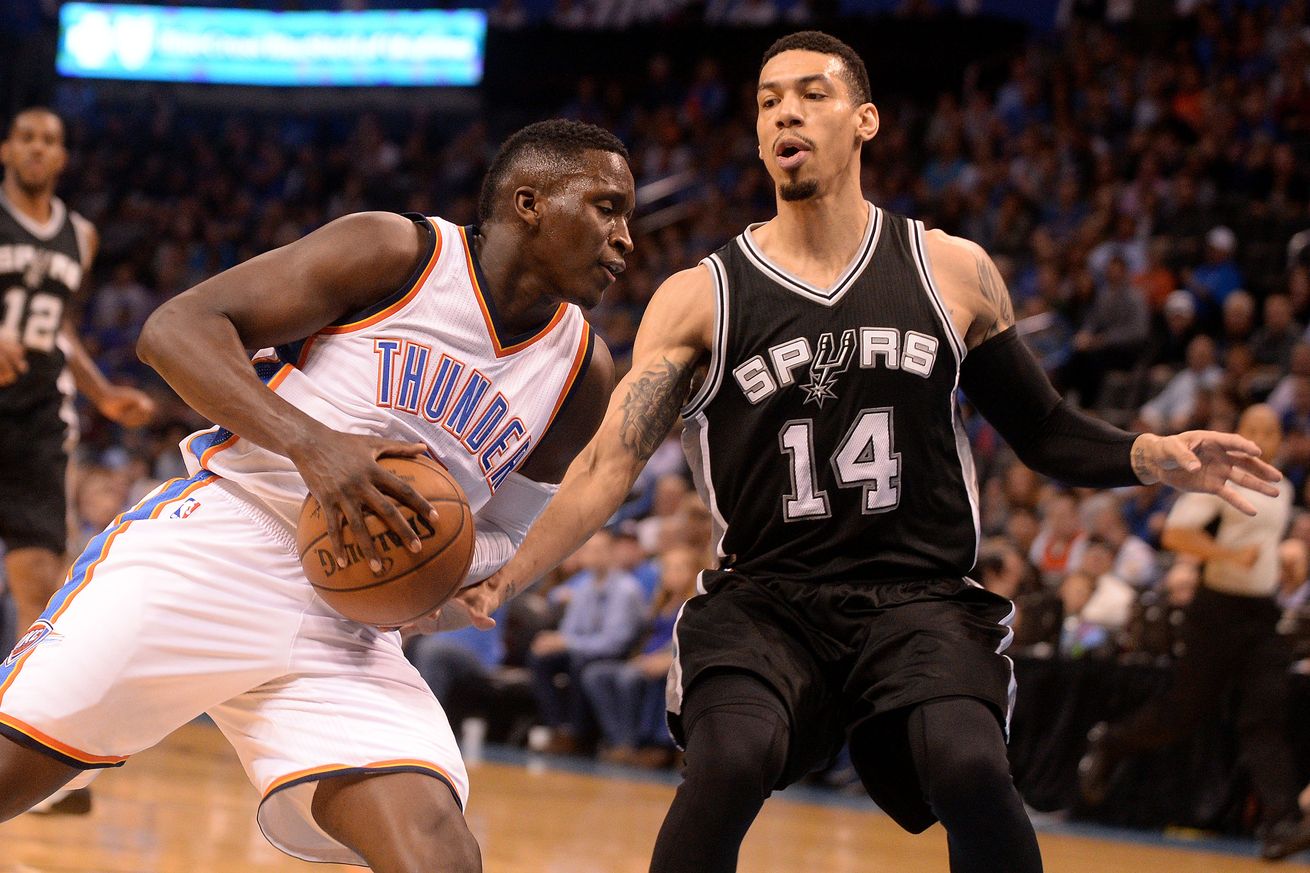 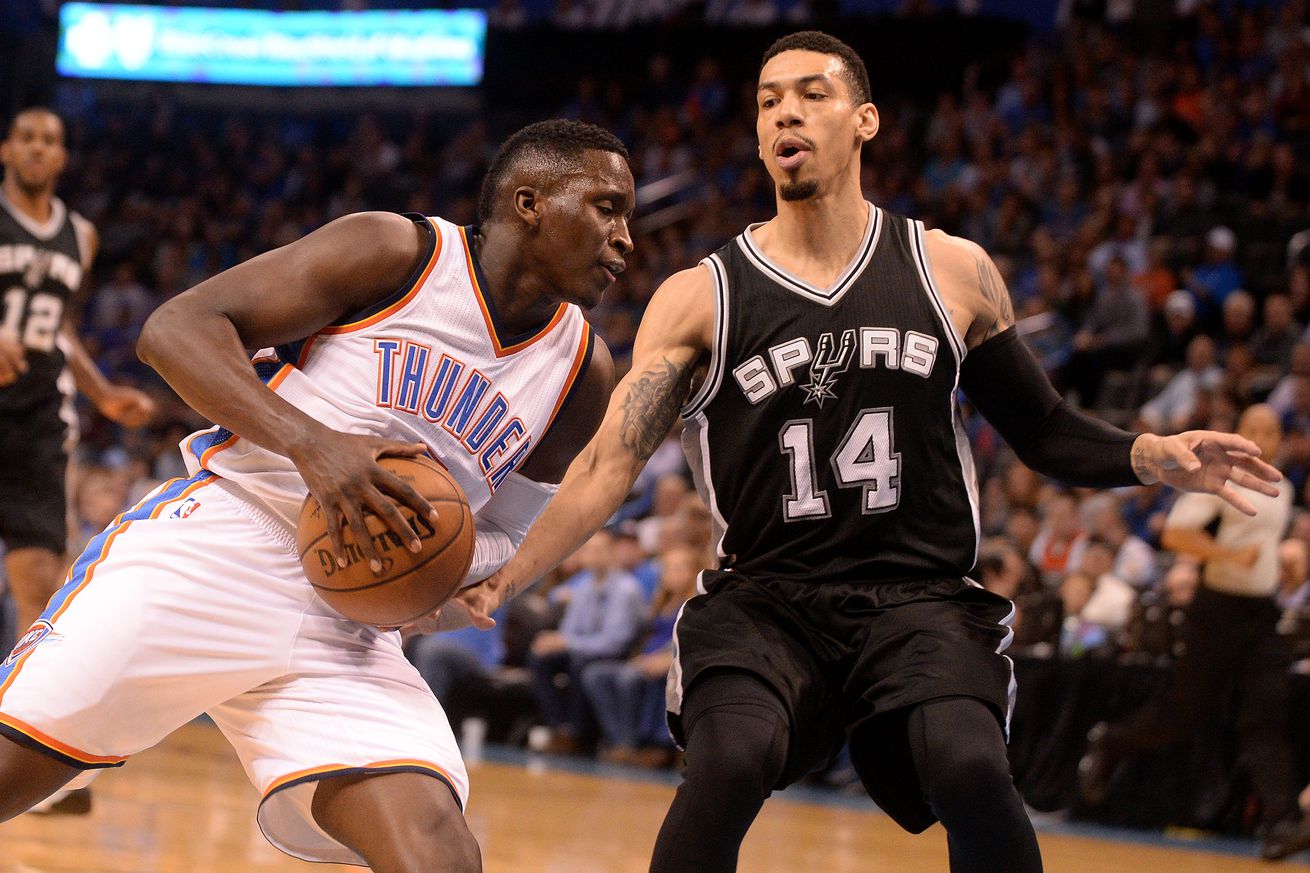 It looked like a repeat of Wednesday night, except with the Spurs being the lethargic group in the first half, and slowly mounting a second half comeback and proving that the only moments the lead matters are the final 37 seconds. Kawhi scored 20 of his 28 points in the second half to lead the Spurs to their 57th win, despite Russell Westbrook’s 39th triple double with 32 points, 15 rebounds, and 12 assists.

The Spurs struggled in the first quarter, going 1-7 with 3 turnovers, leading to a 14-3 OKC lead halfway through first. Pop brought Manu, Gasol, and Mills in for some energy, but it didn’t help the Spurs’ shooting as they ended the first down 26-16 on 7-20 shooting. OKC had 18 rebounds to the Spurs’ 16 points, to really underline the visitor’s struggles.

Tony was the only guy being aggressive for the Spurs in the first half, and he only had 6 at halftime. LaMarcus Aldridge and Kawhi Leonard, the Spurs’ two leading scorers combined to shoot 5-18, for 13 points between them at halftime. OKC outrebounded San Antonio 15-26 in the first half. The Spurs didn’t get their first fast break point till about 3 minutes left in the half. Manu hit a 3 with under 2 minutes left to bring the Spurs within 12, then Patty Mills hit another followed by a steal and slam for Kawhi. Patty had a hard foul on Russ so he wouldn’t get a shot off, and it worked, but then he hit all 3 freebies to give him 19, 7, and 7 at the half, well on his way to his 39th triple double. The Spurs went into the half down 54-41, and probably lucky that they were only down 13 after such a terrible first half…Kawhi led the Spurs with 8 in the first half, Victor Oladipo had 12 for the Thunder to back up Russ’ 19.

Tony opened up the scoring for San Antonio in the second half with a flashback layup, remaining the most aggressive Spur at this point, even with only 8 points. It seemed that no matter what the Spurs did, the Thunder did more. OKC won in every category except turnovers (12-8), steals(4-3), and blocks (7-2). San Antonio missed 4-6 freebies in the middle of the third to accentuate the poor shooting night. Kawhi had a 3-point play to bring the good guys to within 14, then Russ missed a dunk, Pau hit 2 freebies, and Steven Adams had on offensive foul, then Manu found Pau underneath to bring the Spurs within 10 with 3:50 left in the third. Manu was a passing fool in the third, and found Kawhi underneath to shrink the lead to 6. Kawhi had 13 in the third and helped San Antonio to a 30 point quarter and end the third only down 76-71 thanks to a buzzer-beater fade-away 3 by Patty. Pau was also great in the quarter, ending it with 12 points. Russ ended the quarter on the bench, with 26, 14 boards, and 8 assists.

The final period was more back and forth throughout, with a three by Kawhi and a layup by David Lee bringing the Spurs within 3. And then Russ had his 10th assist to give him his 39th triple double on the year, 2 away from tying the NBA record. The struggles from the stripe continued, as Manu missed out on completing the 3 point play, and the Spurs ended the night 11-20. Manu made an absolutely Manu/bananas pass across court while falling to Patty who hit the corner 3 to tie the game at 85. Pau hit a corner 3 to bring it within 1 before Russ went back to the line to regain the 3 point lead. After the 18th TO by OKC, LA was fouled and sent to the line to give the Spurs their first lead of the night at 94-93 with 56.1 left. Steven Adams gave the Thunder the lead back on an uncontested dunk, the Aldridge returned the favor on the other end to make it 96-95 with 18.7 left. Aldridge blocked Russ and Kawhi came up with the ball and drove down to the other end and completed the 3-point play to seal the win for the Spurs, 100-95. Manu was the MVP of this game for the Spurs, ending with 8 points, 8 assists, and 100% of fans realizing how much we are going to miss him.

San Antonio is now 2-1 in this Week From Hell, with it finally ending Sunday afternoon against Utah.