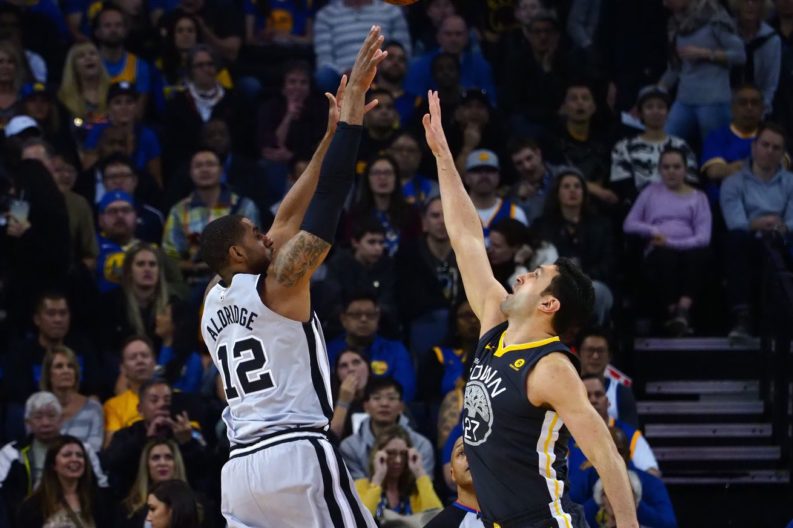 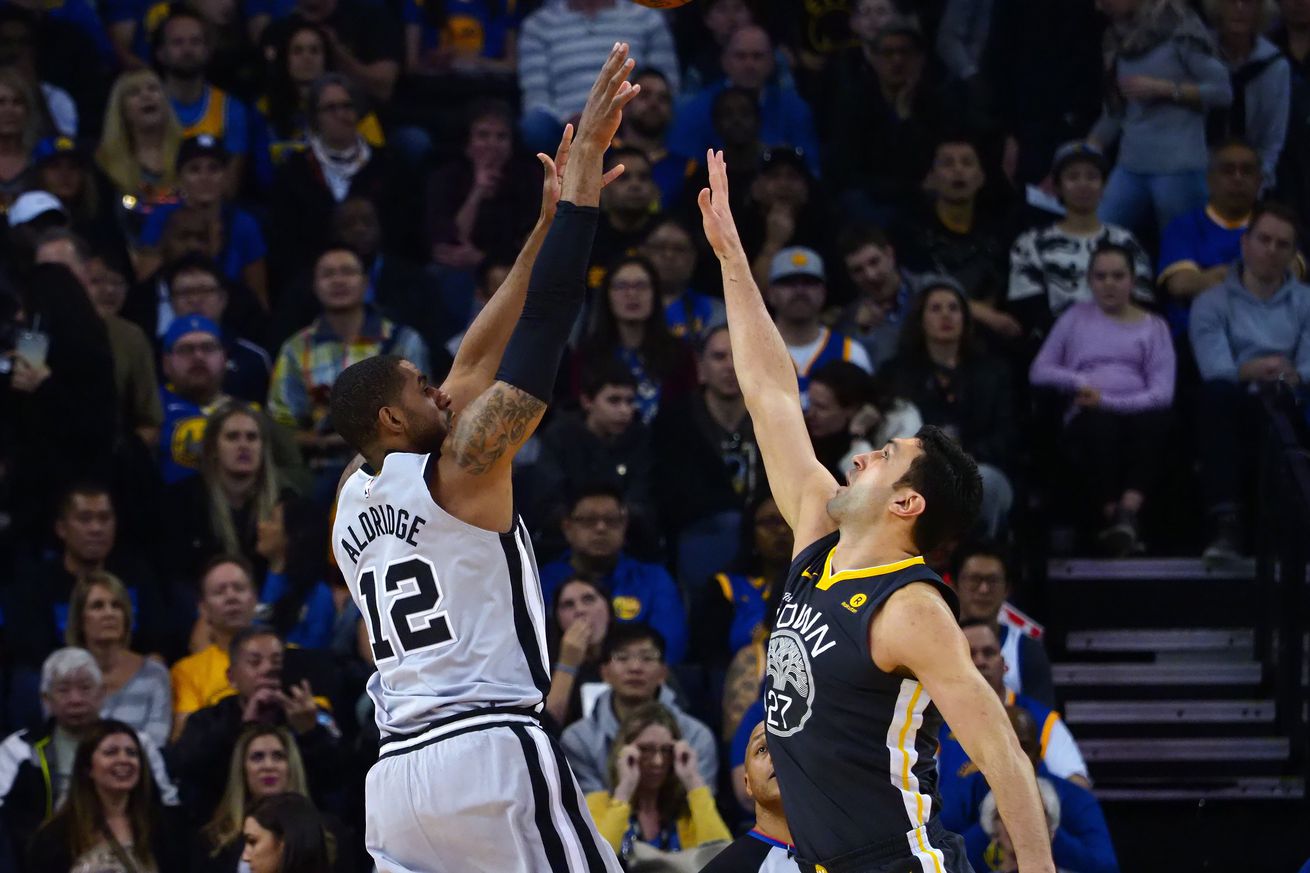 The shorthanded Spurs started fast but the Warriors crushed them late

The Spurs, who have been missing Kawhi Leonard and Rudy Gay for most of the season, had to play tonight without Dejounte Murray and Tony Parker, were able to play the Warriors pretty evenly for a half, but Golden State’s superior talent took over as they turned up the defense in the second half and pulled away to a 122-105 win. Derrick White was pressed into action with the top two point guards for the Silver and Black out, and played well, but Klay Thompson got hot in the second half for the Warriors as they won going away.

LaMarcus Aldridge opened the scoring with a midrange jumper to put the Silver and Black up by a basket. The Spurs got off to a fast start with shots from LaMarcus and Patty Mills to an 8-0 lead. Patty picked up two early fouls, and Derrick White entered the game early. Kevin Durant led the Warriors back in as they climbed back into the game, but an and-one by Kyle Anderson swelled the lead to 15-8. The Spurs crisp ball movement got Bertans open for a triple plus a foul to expand the lead to double digits halfway through the quarter. Klay Thompson and Steph Curry led an 8-0 run for the Warriors, but the Spur answered with a 10-0 run of their own led by timely shots from Manu Ginobili to lead 33-21 with 2 minutes left. The last basket of the quarter was a drive to the basket from White to put the Spurs up 37-27 after one.

The Spurs started the second quarter with defensive intensity, turning Golden State over but they were missing their shots the Warriors started to hit theirs as they cut the lead to two in the first four minutes of the quarter. After a questionable foul call on Patty Mills for falling down under David West after he was hit on a three point attempt, the Warriors tied the score at 44 each halfway through the quarter. The Warriors offense got untracked with Steph Curry and Draymond Green hitting triples, but the Spurs fought back gamely with Kyle Anderson using an impressive array of fakes and deceptive moves to get off shots to keep the Spurs close. The Warriors led 58-55 at the half.

The start to the third quarter wasn’t pretty, but the Spurs fought for rebounds and tied it up at 62 each early. Unfortunately, turnovers allowed Golden State to retake the lead with easy baskets in transition to get a 7 point lead. Manu Ginobili’s steal gave Kyle Anderson an easy basket to bring the Spurs back within 3. But with Klay Thompson getting hot from beyond the line and the Warriors bigs getting open looks at the basket, Golden State led 80-70 with four minutes left in the third. Javale McGee gave some good minutes for the Warriors as the Warriors extended their lead, and the score was 91-75 after three.

Darrun Hilliard got significant time in the final quarter for the Silver and Black and played well. Gregg Popovich gave minutes to the deep end of the bench, with Brandon Paul and Joffrey Lauvergne getting onto the court, they played with energy but were overpowered by Klay Thompson as the Warriors extended the lead. The last 6 minutes were extended garbage time as Steve Kerr gave the end of his bench some playing time as Nick Young padded his stats and the Warriors won 122-105.

With all of the young guys* on the Spurs making an impact, it’s a new day rising.

The Spurs continue their rodeo road trip on Monday at 8:00 pm at the Utah Jazz. The Spurs are currently 35-22 and are in 3rd place in the Western Conference of the NBA.